Can the assignment "Depot Battalion" in Hart's Annual Army List be linked to a specific regimental assignment?

In this question I asked about the meaning of the assignment "depot battalion" in Hart's Annual Army List, a book that lists the assignments of every British officer in the Victoria era, each year.

It appears to mean the officer was assigned to a sort of reserve battalion associated with a regiment, rather than to a service battalion.

However, listings like the third one on this page do not indicate which regiment the officer was assigned to, only that they were assigned to some depot battalion.

Is there some general way to determine which regiment a person was assigned to?

Failing that, why were such detailed records kept of most assignments, but not those to depot battalions?

A more readable copy of the 1887 Hart's List here

The reference being asked about is this mention of:

In summary, Brevet Col. Cardew's posting is to Staff Officer of Pensioners located at an appropriate Depot Battalion; in his case that of the Hounslow Regimental District - serving the 7th Royal Fusiliers (City of London Regiment) and the 57th 1st Battalion Duke of Cambridge's Own (Middlesex Regiment). He continues to draw his Captain's half-pay from the 9th Foot, to which he transferred from the 19th foot effective 23 October 1857. 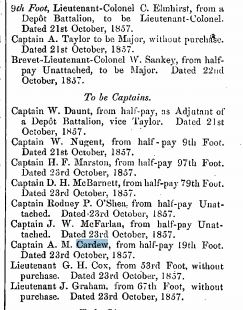 Not the answer you're looking for? Browse other questions tagged military united-kingdom victorian or ask your own question.

10
What does "Depot Battalion" mean in Hart's Annual Army List?
11
Did Continental Army officers wear wigs or keep their hair white like their British Army counterparts?
7
What were the ranks in the Army of Imperial Spain?

10
What does "Depot Battalion" mean in Hart's Annual Army List?