I read a marriage notice from 1913, which noted that the father of the groom "has four sons abroad, three having served with distinction in the junior Service". (West Sussex Gazette, Thu 13 Feb 1913, British Newspaper Archive link, paywalled).

I was curious about the term "junior Service". A quick search suggested that the RAF is sometimes called the junior service, as it was established more recently than the army or navy (e.g. BBC and Quora). But the RAF was founded in 1918, and this article pre-dates that by five years.

So what might the "junior Service" have been in the British military in 1913?

Not all of them may have enlisted by the time the article was written. I would guess from this list that any or all of them might be considered "junior" compared to the army and navy, but is there a reference that could clarify this?

In British parlance the Royal Navy is The Senior Service due to having been created as a permanent establishment in Tudor times, while the Army only became permanent a few centuries later.

The importance of a distinction is the need for military officers to know, at all times, who is the most senior for command purposes. Within each service officers at a specific rank assess their seniority by date of commission, both brevet and substantial. When two services are working together the same applies, except an additional tie breaker is available. - if rank are equivalent and dates of commission are the same, then the Royal Navy officer has seniority over the Army officer.

In 1913 there was as yet no Royal Air Force, and various Corps such as the Royal Artillery and Engineers were simply branches of the Army. So the only available junior service was the Army, unambiguously.

Note that it is possible to look up the effective commission date for all British Officers since 7 November 1665 on the London Gazette Archive. For example, here is the announcement of the promotion to Brevet Field Marshal of Arthur Wellesley in the July 3, 1813 Extraordinary Edition (pp 1270, lower right). 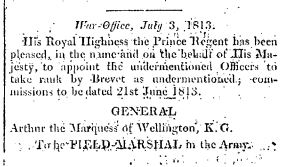 That edition also contains the after action reports filed by Wellington dated June 22 and 24, 1813, following the battle of Battle of Vitoria, including the names of all officers killed or wounded in that engagement.

The Queen's Regulations for the Army 1975 outline in Chapter 2, Parts 3 and 4 and further in Sections 9.163-9.167 the precise workings of how seniority of officers is to be determined:

These principles have remained unchanged over centuries, though details have become more complicated over time.

b. the service: the Army or Navy (according to the implication in the context) considered as a sphere of duty or occupation, or as a profession. Also, the Air Force and intelligence departments. So the (United) Services, the Army and Navy. For the senior service (the Navy), see senior a. 2.
1706: Farquhar Recruit. Officer iv. i, “Sir, I wou'd qualifie my self for the Service.”
1714: Spect. No. 566 3 “A Man has scarce the Face to make his Court to a Lady, without some Credentials from the Service to recommend him.”
1777: Earl Carlisle in Jesse Selwyn & Contemp. (1844) III. 208 “No domestic reasons can be strong enough to justify a man in quitting the service at the opening of a campaign.”
1833: Marryat P. Simple xxviii, “I wish Mr. Harrison would stay on shore with his wife altogether,—it's really trifling with the service.”
1842: Burn Nav. & Mil. Techn. Fr. Dict. Pref. (1852), “My brother officers, or those of the Sister Service.”
1845: Stocqueler Brit. India (1854) 381 “The merchants and others not connected with `the services' could only be admitted by ballot.”
1862: G. H. Kingsley Sport & Trav. (1900) 362 “Every morning there is a small row of the United Services standing just abaft of the mainmast.”
1872: Routledge's Ev. Boy's Ann. 185/1 “The Service is going to the dogs.”

The Senior Service: the navy as distinguished form the army. [attested from at least 1899, and again in 1911, as below] 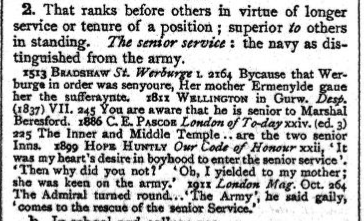 (b) the lower forms of some fee-paying schools; junior service, the Army; junior stock (see quot. 1914); junior technical school, a school providing a technical and secondary education for boys. […]

1915: E. Wallace Man who bought London viii. 81 “She had a son in the army, and she bore the *junior service a grudge in consequence.”

During my service in the Royal Navy - I think it might have been while serving at a joint services college - I was told that the expression "Senior Service" was coined during the period when the East India Company had a larger Navy than most countries. The RN was described as senior to the East India Company's Navy.

Not the answer you're looking for? Browse other questions tagged military united-kingdom british-empire government or ask your own question.

8
U.S. Marine Corps and Why does the Navy’s army need its own air force?
11
Why has SACEUR exclusively been an American officer?
3
What have been the advantages/disadvantages of NOAA and the USPHS having uniformed services?
21
Was the British Army a millionaire factory in the early 20th century?
2
Why did Allied Command maintain passive, especially Indian units in Middle East during the years 1942 and 1943?
15
Based on his service record, where was this soldier deployed in WW2?
11
Why was the Soviet Naval Infantry disbanded in 1947?
6
What was the Soviet reasoning for developing their Airborne Forces (VDV) into a powerful military branch?
1
Is there evidence to suggest the British Parliament was reluctant to deal with the Nassau Pirates because they made a convenient bogeyman?