What's the history of the source of the slogan "power to the people"?

I can't find any detailed information on this phrase from a reasonable amount of internet searching. The current version of the wikipedia article about this slogan is light on details and very undersourced (the first source article from greenleft.org.au is a broken link that is not in the Internet Archive), but does have this to say:

During the 1960s in the United States, young people began speaking and writing this phrase as a form of rebellion against what they perceived as the oppression by the older generation, especially The Establishment. The Black Panthers used the slogan "All Power to the People" to protest the rich, ruling class domination of society. Pro-democracy students used it to protest America's military campaign in Vietnam.

The Black Panther Party (BPP), as suggested by the passage you cited, does seem to be the originator of this slogan in terms of the protests movements from the 1960s onwards, with 'all' originally preceding it. The earliest confirmed use I've found was on a March 1969 BPP poster (see below).

In his autobiography, BPP Minister of Defense and co-founder Huey P. Newton writes:

Another expression that helped to raise Black people’s consciousness is “All Power to the People....it was coined by the Black Panther Party around the same time as “pig,”....the slogan “All Power to the People” sums up our goals for Black people, as well as our deep love and commitment to them. All power comes from the people, and all power must ultimately be vested in them.

Pinpointing the exact date it was first used is difficult; the BPP was founded in 1966 but the slogan does not appear in their original 10-point program. Bobby Seal, co-founder of the party says (in Power to the People: The World of the Black Panthers) that he used "All power to all the people" in the 1960s.

In the citation above, Newton mentions 'all power to the people' was coined 'around the same time as "pig"'. The use of 'pig' with reference to the police dates back to at least 1785, but seems to have fallen out of use in this sense until re-emerging in 1968 according to both this wordwizard post and the article When Cops Were Pigs (1968).

Looking at speeches by BPP members, the slogan 'All Power to the People' does not appear to have been used before 1969. There is more of a focus initially on 'Black Power'.In a 1968 speech at the Free Huey Rally in February 1968, Bobby Seale uses the word 'power' numerous times, but never the slogan. Rather he ends his speech with,

BPP member Fred Hampton, in a speech he gave in 1969 at Olivet Church also doesn't use the slogan. Rather, he opens with

but in a speech at Nothern Illinois University in November 1969, he does use it:

In 1967, Emory Douglas became Minister of Culture for the BPP and was responsible for much of their artwork. In March 1969, he produced the poster below. 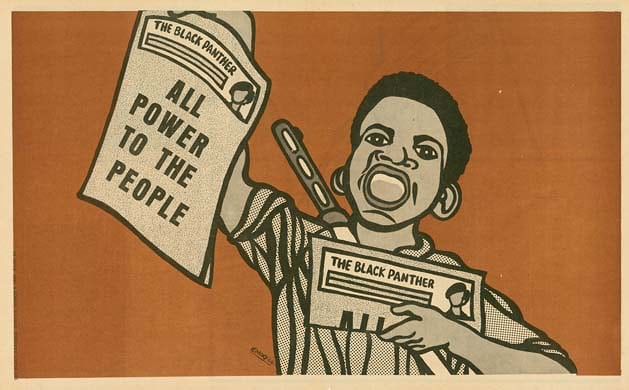 By May 1969, jazz saxophonist Joe Henderson had picked up on the slogan and recorded an album with the title Power to the People.

Also in May 1969, the Berkeley Liberation program was first made public with the words All Power to the People prominently displayed. This 13-point program was written by "various bay area radicals", among whom were Tom Hayden and local Yippie (Youth International Party) Stew Albert, and influenced by the BPP. 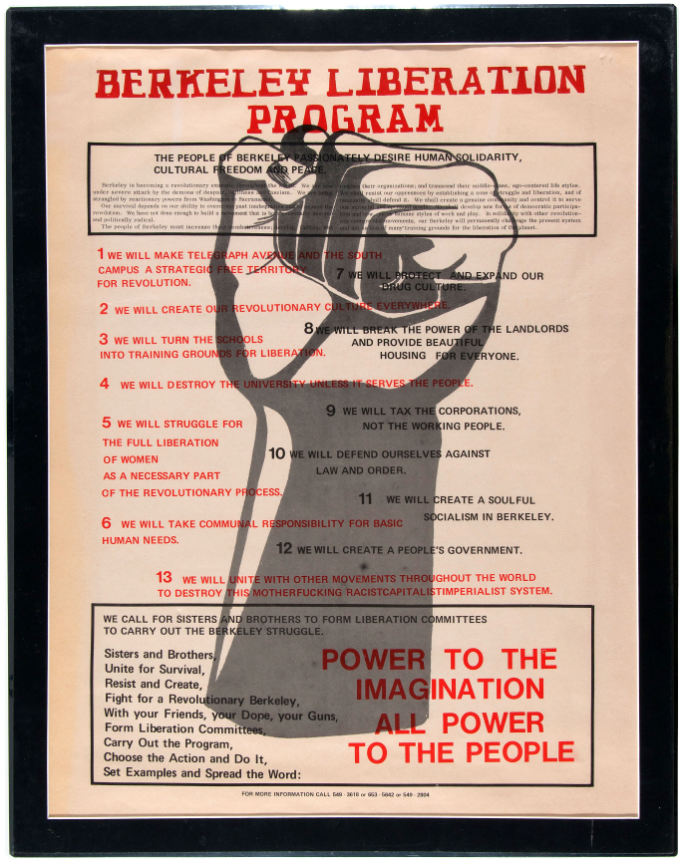 As to who exactly coined the phrase, Seale does not appear to make any claims while Newton is vague on this, though he seems to be the most likely candidate. In the citation above, he simply says 'the BPP'. In the Huey P. Newton Reader, a collection of his writings, he says (note the use of 'we' here):

When we coined the expression "All Power to the People," we had in mind emphasizing the word "Power," for we recognize that the will to power is the basic drive of man.

The use of 'will to power' here seems to be a strong clue as to at least part of the inspiration for 'All Power to the People' as Newton states in his autobiography Revolutionary Suicide that he read Nietzsche and was influenced by the Will to Power, saying,

I learned much from a number of his philosophical insights...

It is perhaps worth noting that the phrase 'Power to the People' has been used in other contexts since at least 1837; it was used in A General View of the Origin and Nature of the Constitution and Government of the United States by Henry Baldwin:

I have traced the right to property to and power to the people of each state...

However, there is no evidence that either Newton or any other Panther read this or, if they did, that it was the origin of 'All Power to the People'.

Not the answer you're looking for? Browse other questions tagged united-states quotes 1960s black-history or ask your own question.