Where was Canterbury College (Oxford) located?

I hope this is on-topic. I am reading about former Oxford University colleges. For many their historic location in the city is well documented. I just came across one however which is unclear. It is Canterbury College. Founded in 1311, as with other monastic colleges in Oxford (e.g. Gloucester College, Durham College and St. Mary's College), Henri VIII dissolved them, it's land being transferred to the Crown or sold to individuals or other non-monastic colleges.

Regarding the location of the college, Wikipedia (based on this article) states that it was located

near the church of St. Peter-in-the-East.

This church is located to the East of Oxford, inside the historic (walled) town. But, this area was not empty (see map). Next to the church was St. Edmund's Hall, already funded the previous century. Next to this college was founded Queen's College, and later on New College. The latter article states:

The site on which the college would be built was acquired from several sources, including the City of Oxford, Merton College and Queen's College. 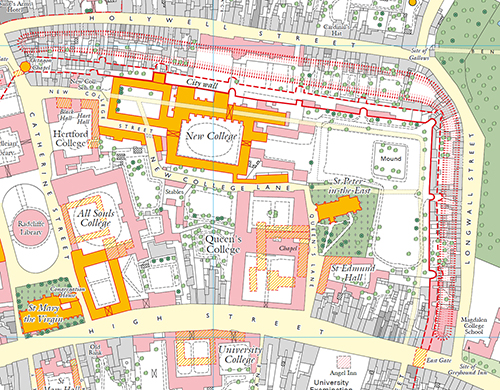 No particular mention to Canterbury College, which already existed when Queen's Colelge and New College were founded. On the north west side of the church there is just greens and the old wall, already existing when New College was set-up (and that they had since then maintained).

Now, after the dissolution of the monasteries, the site was allegedly acquired by another college, Christ Church. And this college has a quadrangle called Canterbury Quad, which they state:

Passing in front of the library, you will enter the last area on your visit to Christ Church, Canterbury Quadrangle. Built on the site of the medieval Canterbury College, after which the quad takes its name, ... Shortly after the dissolution of the monasteries by Henry VIII in the 1530s, the hall, chapel and other buildings of Canterbury College were acquired for the new Oxford foundation.

Thus, this college claims that the site was in a rather different location of the old city (south). Since it had a hall, a chapel, and other buildings, it must have been sufficiently big to not fit "near the church of St. Peter-in-the-East".

I've tried to search for confirmation of the above claim, particularly looking for an old map of Oxford, but I have not found one. Most of maps seems to be seventeen century onwards (e.g. a famous one here; zoom allowed).

Maybe someone has better access to sources or know where to find sources to settle this issue?

The National Library of Australia (of all places) has an electronic version of an 1884 publication from the Oxford Historical Society, entitled "Old Plans of Oxford". It includes Agas' 1578 map of Oxford (mentioned by sempaiscuba in the comments), on which Canterbury College can be found. Here's an extract from Panel II: 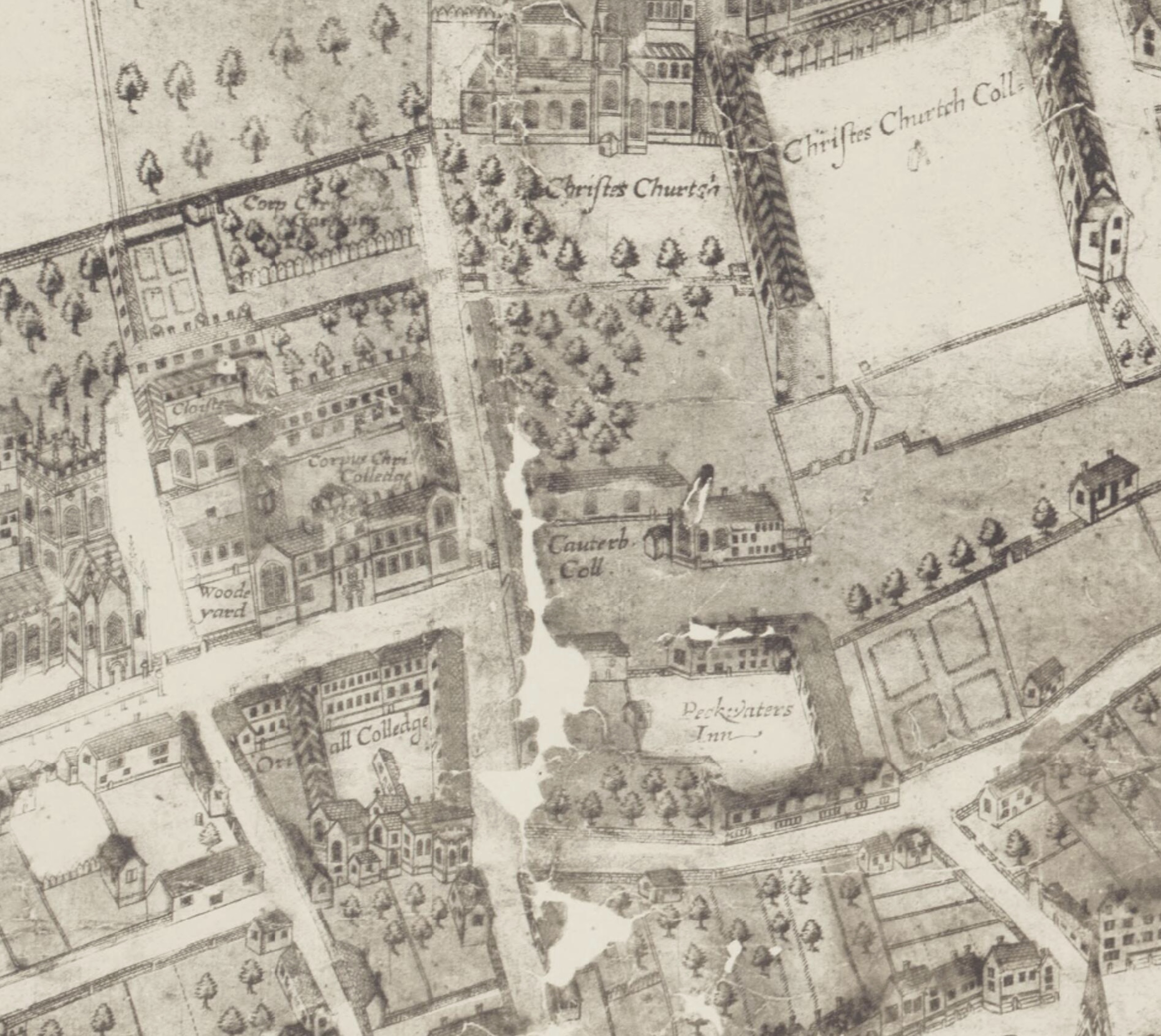 This appears to be approximately here on Google Maps: 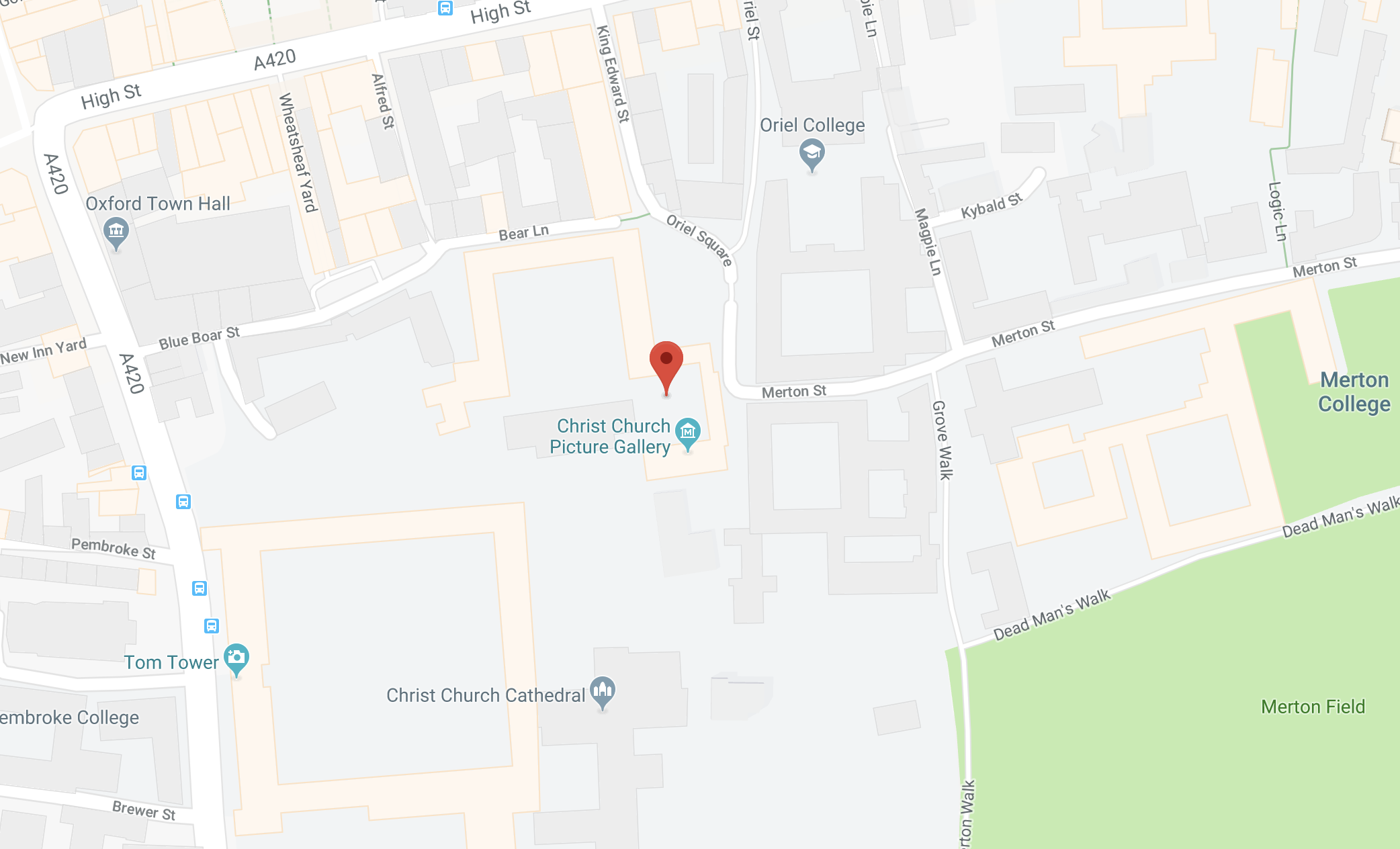 Note that South appears to be at the top of Agas's map.

Well, kind of embarrassing, but the original Wikipedia article was correct, because the full phrase is:

The Priory first sent 4 monks to study in Oxford in 1311, in a hall it had bought there near the church of St. Peter-in-the-East, but the actual college was founded in 1362 by Simon Islip, archbishop of Canterbury, in the parish of St. Edward.

After looking for such parish, I found this website, which has this nice map of Oxford, allegedly from AD 1375 (hiqh quality here):

It is possible to see there that number 7 is the parish of St. Edward, referred in the article. The college can also be seen where now is Christ Church college.