Does anyone have an example of the Tamil elephant symbol?

The elephant was the royal emblem of the Ay Dynasty and flag of their kingdom, and that the symbol was taken over by the Chera dynasty after their conquest of the Ay Kingdom.

Does anyone have an examples of the elephant symbol as uses by the Ays and Cheras?

Apparently there is some surviving Chera coinage that features an elephant: 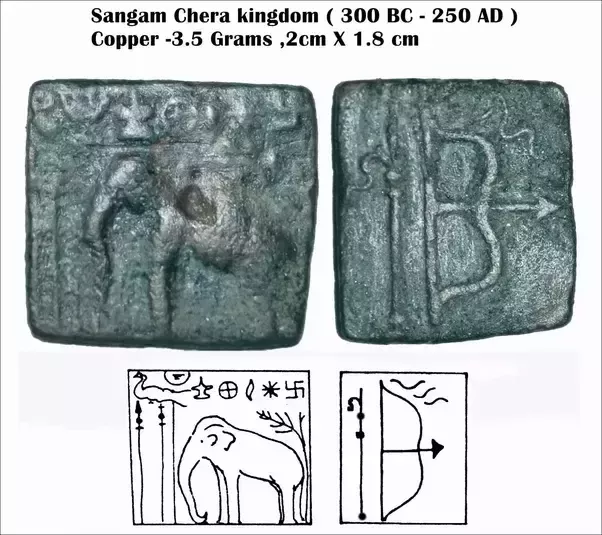 Details from The Hindu on what is probably the same coin:

The coin, which is almost a square in shape, has an elephant facing to the right and some symbols towards the top of the coin.... A drawn bow and arrow was visible on the other side. Below the arrow is an elephant goad (a prod used to control elephants). These coins bear a striking resemblance to the ones excavated from Karur in Tamil Nadu, said the archaeologists. ...it was for the first time that the coins of the Adi Chera period was excavated from Kerala.

Not the answer you're looking for? Browse other questions tagged ancient-india or ask your own question.

3
Does the appearance of cremation support the Aryan Migration theory?
15
Where did the Roman money involved in the spice and luxury trade end up?
11
Did the emperor Ashoka really build hospitals or is that a myth?