How did Hitler get off so lightly after the Beer Hall Putsch? 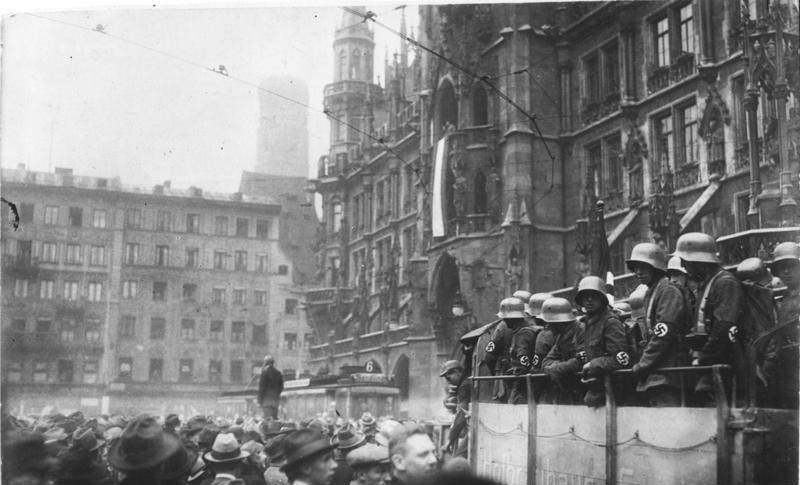 The main square in Munich during the Beer Hall Putsch

On November 8–9 1923 the Beer Hall Putsch or Munich Putsch was an attempted coup by the Nazi Party against the German Weimar Republic which resulted in the death of 16 Nazis and 4 police officers.

The Putsch would have been successful except for the quick thinking of a handful of men and 3,000 students rioting from the University of Munich until the Putsch was put down, and Hitler was arrested.

Hitler escaped into the countryside where he was apprehended after two days and charged with high treason.

Hitler was not tried by a jury of his peers. The Weimar Republic's court system had implemented the Emminger Reform (Jan 1924) in the build up to Hitler's trial which began Feb 1924. Rather than a trial of his peers, Hitler would be tried in front of mixed system of judges and lay judges.

Hitler's Rise to Power
After the putsch the party was banned in Bavaria, but it participated in 1924's two elections by proxy as the National Socialist Freedom Movement. In the German election, May 1924 the party gained seats in the Reichstag, with 6.55% (1,918,329) voting for the Movement. In the German election, December 1924 the National Socialist Freedom Movement (NSFB) (Combination of the Deutschvölkische Freiheitspartei (DVFP) and the Nazi Party (NSDAP)) lost 18 seats, only holding on to 14 seats, with 3% (907,242) of the electorate voting for Hitler's party.

During the trial, Hitler took full and sole responsibility for the coup, inspiring his title "Führer" or "leader" in later years. The lay judges were supporters of Hitler and needed persuading to not dismiss the case altogether.

Hitler received a sentence of 5 years in prison for his part in the putsch. His part being the confessed leader and responsibility for the deaths of 20 people, 4 of whom were police officers.

Hitler would serve a little more than 8 months of this sentence in comfortable accommodations in a room with the view of the river. He could both receive visitors for hours every day and could socialize with his co-conspirators. He even was permitted the use of a private secretary.

Hitler would make good use of his 8 months, dictating the book Mein Kampf (My Struggle) which would become a best seller and provide significant percentage of his income until his rise to power was complete in March of 1933 with the passage of the Enabling Act of 1933. 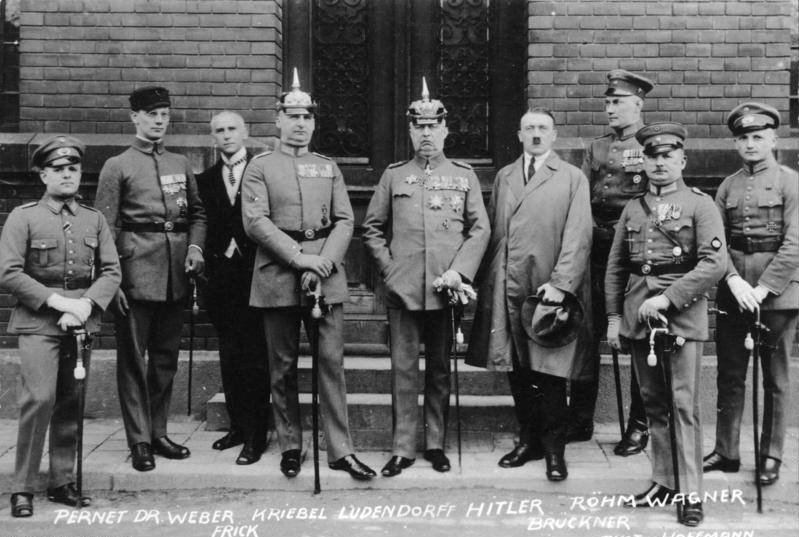 Defendants in the Beer Hall Putsch trial. From left to right: Pernet, Weber, Frick, Kriebel, Ludendorff, Hitler, Bruckner, Röhm, and Wagner. Note that only two of the defendants (Hitler and Frick) were wearing civilian clothes. All those in uniform are carrying swords, indicating officer and/or aristocratic status.

My question:
How did Hitler get off so lightly after admitting in court complete responsibility for the death of 20 people including 4 police officers? Who were these lay judges who supported him, and how were they selected for the trial? Who bears responsibility for this result?

This is partially really almost answered within the question:

The lay judges were supporters of Hitler…

But the whole affair is at the same time really strange and blatantly obvious, in retrospect.

Despite being the most high profile defendant, Ludendorff was still so immensely popular that his role was almost edited out completely before the process really began. And with high profile I mean not only the best known of the defendants but also a really central figure in planning the putsch and garnering support for it. So much so that the whole action is nowadays called the Hitler-Ludendorff-Putsch.

The main judge fiddled with the evidence and replaced an interrogation protocol in which Ludendorff would have been incriminated himself quite severely with another one in which 'he knew just nothing of the plans for the coup'. That emphasises that the main judge was right-wing conservative and therefore highly sympathetic with national socialist ideas and persons.

The name of the judge was Georg Neithardt, with high sympathy for the whole group of defendants, sharing a lot of their goals. Not a good sign for impartial judgement, but quite significant indicator for the attitude in Germany as a whole and Bavaria especially.

The verdict was quite scandalous as even Ludendorff proclaimed after getting away scot-free:

I feel this acquittal as a disgrace for the uniform and the badges of honour I wear towards my comrades.

The points officially brought up in favour of Hitler included that he served in the war, and not for Austria but in the German army, got an iron cross and was just 'generally a good guy with nothing but the noblest of intentions'. His motivation was judged to be of:

The way Hitler and the others were allowed to present themselves during the trial was incredibly eye-opening. Most of the time the public was not allowed to participate and the files documenting what went on were classified even long after the next war by the Federal Republic of Germany. The city of Munich came around only in 1994 to honour the dead with a plaque. But when the public was allowed in, Hitler was really given another stage to agitate against the Weimar Republic.

The verdict then came in with 4 in favour, one against it. The jury was highly biased. The main judge knew Hitler from an earlier court case in 1922. In that he already should have convicted him to 2 months, but just ruled that it was 'probably not necessary to be so harsh'. During the case, Neithardt emphasised that the case had to be conducted within and along the lines of the national interest. He was also responsible for hindering the obligatory transfer of Hitler to a trial before the Staatsgerichtshof, a federal court in Leipzig earlier. Arguing that that might be a bad idea, as there he might face the odd social democrat as a judge instead of rightwing radicals like in Munich. This was not Neithardt's sole responsibility. The Bavarian government against which Hitler putsched, aided him, and the federal government was complicit as well:

The Bavarian state government had apparently only learned from the daily press that the attorney in chief of the state court had been instructed by the imperial government to move the high treason trial against the putschists to Leipzig in order to protect the public. To prevent this, Justice Minister Gürtner immediately asked his cabinet colleagues for negotiations. On November 15, the first discussion of the topic took place in the Reich Ministry of Justice. […]
In Bavaria, the justice department came into the hands of the German nationalistic minister Roth after the Kapp putsch, and it was developed by him and above all by his successor Gürtner into a political instrument with which the Weimar system was to be overcome while keeping the appearance of constitutional conformity. According to Gürtner's own statements, it was also in his interest to make the Battle Federation (Kampfbund) serve this purpose, and he was consequently not allowed to make a front against him even then, when he carried out the coup d'état with brute force and in the justified hope of support from the Bavarian government and its means of power. The preparations and the trial itself proved that the nationalist conservatives as judges of the constitutional and legal norms of the Weimar state were not guided by the law, but by their convictions, whether anti-democratic or democratic.
Bernd Steger: "Der Hitlerprozess und Bayerns Verhältnis zum Reich 1923/24", Vierteljahreshefte für Zeitgeschichte, Vol 25, No 4, 1977.

To really top it off: the justice system, the Bavarian police, the Bavarian government, the Reichs-government were all complicit in bringing forward this trial in a Bavarian People's Court that itself was established illegally in 1919, violating the Weimar constitution.

While this type of court was established during the German Revolution of 1918/19 by order from a socialist called Eisner, it was after the murder of said socialist by nationalist fanatics that it was quickly turned into an instrument of pure political class justice. It always favoured right-wing nationalist and national socialist murderers, terrorists and conversely dealt harsh judgements against anything suspected of being socialist inspired. The Hitler trial was the last but by no means extraordinary trial. The Reichs-government accepted this situation for 5 years.

The most farcical aspect of this is that the murderer of Eisner was tried in 1920 before the People's Court that Eisner established. The assassin was initially sentenced to death. But then his sentence was reduced to just 5 years – by the same judge Neithardt – imprisonment in a fortress (Festungshaft). A sentence deemed "honourable" in the public eye. The same sentence Hitler received. During his "imprisonment" he could almost come and go as he pleased and on workdays he worked on a nearby farm.

In 1924 Eisner's assassin was evicted from his 'honour-cell'. To make room for Hitler. Just as during the Hitler trial later Neithardt explained that this killer was "not of a lowly spirit, but of a fervent love for one's country." And just as with Hitler the Bavarian government went happily along.

The files of that trial being classified by the German state for decades was already mentioned. But it did not stop there. Naturally, Neithardt became a big time Nazi judge after 1933. Then

At the beginning of September 1937 Neithardt was retired with a personal certificate of thanks from Adolf Hitler. He died on November 1, 1941.

In the course of the denazification, arbitration proceedings were instituted against his estate with regard to his widow's substantial pension payments. At first Neithardt was classified as a "main culprit" (Hauptschuldiger meaning quite a criminal Nazi with substantial guilt), the estate was confiscated (Spruchkammer München on 11 March 1950). This accusation has been then consecutively further reduced across various instances. By a court of cassation decision of the Bavarian special ministry of 10 July 1951 it was decided that Neithardt was also no longer a so-called incriminated person. The case was closed at the expense of the treasury.

Just for the sake of comparison why Bavaria and how that People's Court were so notorious: Felix Fechenbach was sentenced in 1922. Guilty of high treason. 11 Years imprisonment and an additional refusal of civil rights for 10 years after serving that sentence. For publishing classified papers. No one killed. He was later pardoned for this infraction. The SA and SS killed him nonetheless in 1933.

That whole process shows that the person Hitler was not that popular at the time, but his nationalist ideas and national socialist motivations were already immensely popular among the masses and the whole state apparatus, where republicans were already fighting a rear guard action.

The lay judges assisting Neithardt are really to be overlooked here, as they had not so much influence over the trial. The whole system was rigged from top to bottom by nationalist extremists in favour of the putschists or any right-wing extremist cutthroat.

17
Did Hitler make the right decision for Germany when he called off Operation Zitadelle (during the Battle of Kursk)?
20
How was beer production affected by the war during WW2?
11
Has any other book in history been as "prescriptive" as Mein Kampf?
3
Was Hitler hostile to anglo-saxons before he became hostile to Jews?
18
How did the Germans get housing again after WWII?
6
Why did the British leave Kohima and Imphal "lightly" defended in 1944?
2
Did foreign countries respond to the Munich Putsch?
2
Who did Mussolini meet after Hitler, on arrival to Germany after rescue?
5
What was the strategic importance of Moscow to the Soviet Union in Dec 1941?
5
Did Hitler and Nazi officials give interviews and cooperate with the Weimar republic general press?