Has a battering ram been used to breach a gate?

I am looking for a specific example of a battering ram used to breach the gate of a castle or fortification in Europe. I can find lots of indirect references to the use of battering rams on gates (Valturio's De re militari, Vegetius' Epitoma) but no actual examples. Likewise, I can find examples of their use to breach walls but not gates (siege of Paris, Masada, Josephus The Jewish War 3.7.19, siege of Hurara, Battle for Jerusalem in 70 AD). I have not been able to find an example of one being used on gates. I admit I am used to dealing with history on a geologic scale so I have had a lot of difficulty researching primary historical sources.

There appear to be very few recorded, specific examples of the successful use of battering rams on gates in either ancient or medieval times, at least compared to successful assaults on walls. Contemporary sources are often either unclear about how gates were assaulted, or don't say whether entry was gained through the walls or through a gate. The clearest example is Richard I's assault on Messina.

In the Chronicon de rebus gestis Ricardi Primi, the chronicler Richard of Devizes relates how Richard I of England, during the Third Crusade, captured Messina in Sicily on October 4th, 1190 by breaking down the gates with a battering ram.

The king, acquainted with nothing better than to take cities by storm and batter forts, let their quivers be emptied first, and then at length made his first assault by his archers who preceded the army. The sky is hidden by the shower of arrows, a thousand darts pierce through the shields spread abroad on the ramparts, nothing could save the rebels against the force of the darts. The walls are left without guard, because no one could look out of doors, but he would have an arrow in his eye before he could shut it.

In the mean time, the king with his troops, without repulse, freely and as though with permission, approached the gates of the city, which with the application of the battering ram he forced in an instant, and having led in his army took every hold in the city...

The King of Sicily, Tancred, was forced to sign a treaty, one of the terms of which was compensation for Richard's sister Joan's lost inheritance (Tancred had imprisoned her and taken her dowry and dower).

There's a possible earlier example mentioned in Liudprand of Cremona's Works when, in 896 AD, Arnulf of Carinthia (died 899) responded to a plea from Pope Formosus to oust the regent of Rome, Ageltrude. Arnulf's soldiers

...had...prepared a number of military engines, when in the midst of the turmoil under the people’s eyes it happened that a little hare, frightened by the din, started to run towards the city. The soldiers...chased the poor creature furiously, and the Romans thinking they were rushing to the attack flung themselves from the walls. The assailants, seeing them in retreat, piled their packs and horses’ saddles againlt the walls and mounted over the heaps that they thus made. One division found a beam of wood fifty feet long and with it battered down one of the gates, forming into that part of Rome which is called Leonine,...

This appears to have been very improvised and perhaps not a proper battering ram but seems worth mentioning nonetheless. Arnulf was crowned Holy Roman Emperor for his efforts but Pope Formosus died the same year (somewhat bizarrely, his corpse was exhumed and put on trial in 897 and his papacy declared null - see Cadaver Synod).

A thorough check of three books on sieges turned up numerous examples of successful (and failed) assaults on walls with battering rams, but there is very little on gates (either failed or successful). In some cases, it is unclear whether a battering ram or some other method was used on the gates:

The Vikings attacked the strongly-sited city of Chartres in 857 or 858, having navigated the river Seine, and apparently broke in through the gates without difficulty, causing mayhem and massacre.

Source: Peter Purton, A History of the early Medieval Siege (2009)

In other cases, it's unclear if entry was gained by battering down the walls or the gate(s). For example,

...in 701 King Aripert attacked Bergamo, “storming it without any difficulty with battering rams and other machines

A number of failed attempts on gates using battering rams are mentioned. Among these are Philip II of France's assault on Châteauroux in 1187, a Danish assault on Paris in 886 and an attempt by El Cid to batter down a gate in Valencia in 1094.

These failures often involved the destruction of the battering ram by the defenders, or defenders disrupting the ram by using hooks or ropes to grab it, or by the attackers simply being overwhelmed by the missiles rained down on them.

Ramming gates probably worked well against simple forts with poor defences. Emperor Diocletian (244 - 311 AD) recognized the weakness of gates and built forts with one gate only, making it easier to concentrate defences on a potential weak point. Gates

In theory...represented the weakest point in the defensive circuit, and might even be vulnerable to fire; but for that reason any right-minded defender concentrated his efforts there.

Gate towers were one way of helping to protect the gate and even a simple ditch could be a major obstacle as it would have to be filled in first. In such cases, catapults (if available) were a much safer option, and attempts were also made to set gates on fire.

Attackers would also on most occasions have been aware that, even if they broke down the gate, there were often formidable defences on the other side. Narrow passages leading from the gate entrance were kill zones, with slits in the walls for defenders to fire down on the attackers who would find it hard to strike back.

Walls, although much thicker, were harder to defend for the simple reason that there was much more to defend. Also, ramming a wall did not necessarily mean having to bring it down; often, rams weakened walls enough so that they would crumble, especially if sappers were at work undermining the foundations.

Although there are quite a number of examples of attackers with battering rams either succeeding or failing to breach walls, I have not turned up specific cases of assaults on gates (though there must have been). One problem is that sources simply mention 'Machines of War'. Campbell & Hook mention several examples of the Carthaginians using battering rams in Sicily, but always to 'shake the walls'. Rams do not appear to have been used much in ancient Greece, but the Spartans (according to Thucydides) did use one (unsuccessfully) against the walls of Plataea in 429 BC. The Romans used rams much more, along with other siege equipment, and Julius Caesar's forces successfully breached a gate during the war with Pompey but it's not clear whether rams were used.

OUTSIDE THE SCOPE OF THE QUESTION (but worth showing)

One of two depiction I've found of a battering ram being used against what appears to be a gate is the Assyrian King Shalmaneser III's assault on the Hattian city of Dabigu in the 2nd year of his reign (858 BC) (pdf) in central Anatolia (so marginally outside Europe).

Six-wheeled battering ram attacking the city of Dabigu. The poles at the back of the ram may have been used by draft animals to drag the ram from place to place as required. Source: The Battering Ram (womeninthebible.net)

The other depiction falls outside the medieval period; it's a 1529 German woodcut. Unfortunately, the town being assaulted isn't mentioned. 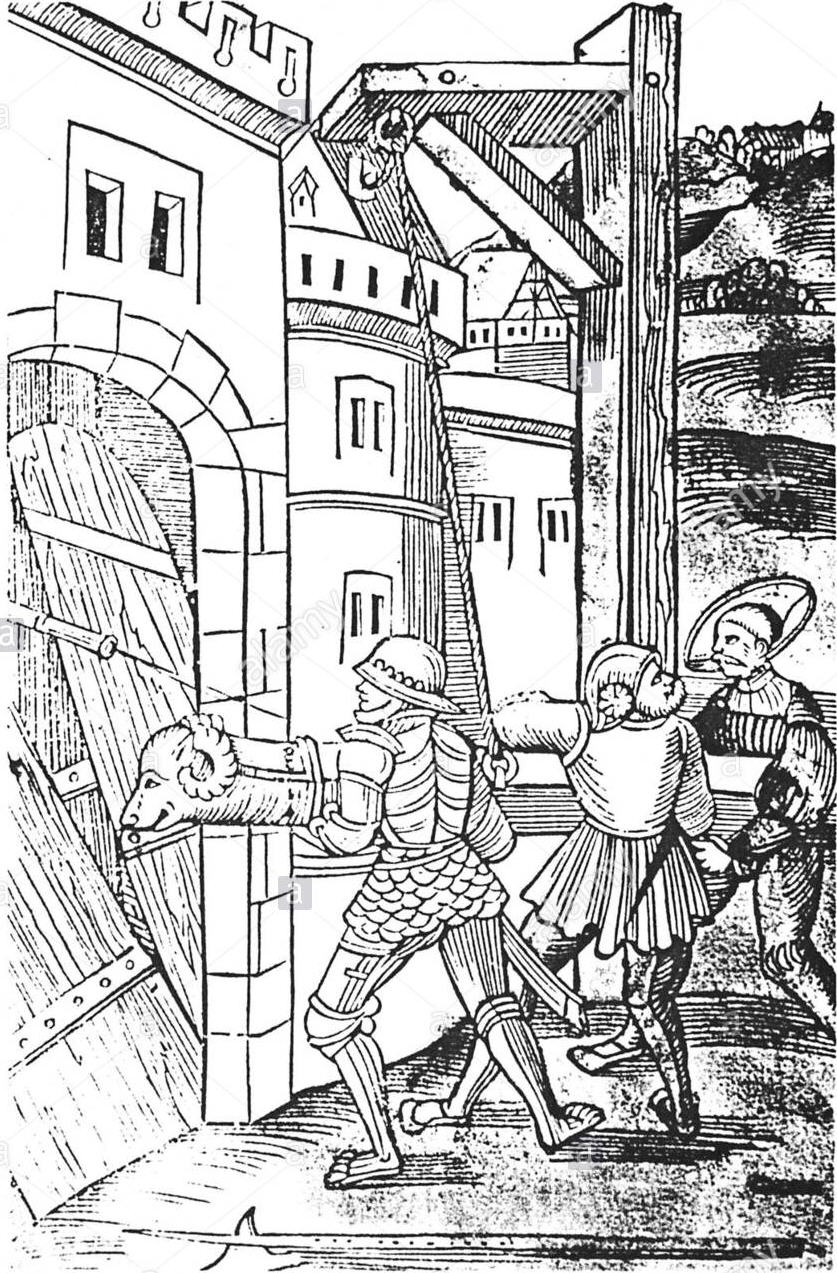 Here are a few more examples of use of battering rams:

From The Ruin of Britain by St. Gildas, writing c. AD 480 to 580 and referring to the first uprising of Anglo-Saxon mercenaries generations earlier:

I put the reference to battering-rams in boldface. I always assumed from this quote that Gildas was referring to the use of battering rams to break down city gates and enter the cities. But this discussion shows that the battering rams could have been used to make breaches in city walls. And in fact this quote seems to refer to columns being toppled by battering-rams.

The use of elephants to break down wooden gates in India was apparently feared enough for some gates to be equipped with anti elephant spikes to keep the elephants away.

And it is said that one gate in India had a short length of wall built a short distance ahead of it, so that elephants or men with battering rams could not build up speed in a long straight run at the gate.

Not the answer you're looking for? Browse other questions tagged military middle-ages ancient-history weapons or ask your own question.

13
How were fortification doors protected against fire?
3
Battle which has been decided by an epidemic plague
3
Which ancient text claims that everything has been said before?
8
Has the Scythe ever been used as a weapon?
10
Has there been an occasion where ranged weapons were available but not used?
6
Jerusalem 1187: How would Saladin's army have laid siege to the walls?
3
Why has the khopesh never been used since ancient Egypt?
6
How long ago was the yo-yo first used as a weapon?
10
How did (riverine) toll castles operate?