Why did Joseph Goebbels allow an all-Jewish Orchestra to exist and perform in Berlin from 1938 to 1941?

Rehearsal for a performance of Judas Maccabaeus (Handel) in May 1934 by the Kulturbund Deutscher Juden Orchestra, in the (Bernburger Straße) Berliner Philharmonie; conductor: Kurt Singer. Sources: Wikipedia and The Jüdische Kulturbund Project

I am beginning to research every-day life (culture / society) in Nazi Germany and in the occupied nations during World War II (hence my earlier question here about the Hitler Youth). I am starting by reviewing what kind of news (print and broadcast) Germans, French, Dutch, and Norwegian citizens had access to (legal and contraband), access to food and basic supplies (gasoline, heating fuel, etc.), and cultural activities (theater, libraries, symphonies, etc.). I know this is just the tip of the iceberg but I must start somewhere. I have purchased and started reading Diary of the Dark Years, 1940-1944: Collaboration, Resistance and Daily Life in Occupied Paris (Jean Guéhenno, Oxford University Press, Reprint Edition, 2016) and I just came across another book which I have just ordered, which gives rise to my question here (the book may answer my question, but I don't have it yet, and it won’t arrive until mid October).

The bulk of the elements of daily life I am starting with obviously fell under the purview of Joseph Goebbels as Reichsminister of Propaganda. The Propaganda Ministry controlled rallies, public health, youth and race, radio, national and foreign press, films, art, music, theater, and protection against counter-propaganda.

The book I just ordered is A Jewish Orchestra in Nazi Germany (Lily Hirsch, University of Michigan Press, 2011). I have read some reviews of the book and am intrigued by the Jüdischer Kulturbund which was permitted to continue publishing Jewish books, conduct lectures and maintain a performing Jewish orchestra in Berlin, with eventual smaller branches in other German cities.

Why did Goebbels, a fanatic anti-Semite who orchestrated the public burning of books and the purging of the Berlin and Vienna Philharmonics of all Jewish musicians, allow the Jüdischer Kulturbund to publish books and maintain a Jewish orchestra from 1938 to 1941 in Berlin?

The short answer is that the orchestra served as a useful propaganda tool both at home and abroad, helped the Nazi regime achieve their initial goal of seperating Jews from German society and culture, and served as a means of social control.

Allowing the Jüdischer Kulturbund or Jewish Cultural Federation was not as inconsistent with overall Nazi policy towards Jews as it might at first seem. From the time the Nazis came to power in 1933, their policy was to exclude Jews from German society. For the Nazis, there were Germans and there were Jews; there was no such thing as a German Jew. Thus, in April 1933 Hitler

permitted an organised boycott of Jewish businesses and his government enacted a string of laws that gradually excluded the Jews from government employment and public life. Under the Nuremberg Laws of 1935 German Jews were reduced to subject status and lost the rights of citizens. Germany became, in effect, an apartheid state.

These exclusions from German society included musicians, actors and other performers. Also in 1935, the original name of the league, Kulturbund Deutscher Juden or the Cultural Federation of German Jews was no longer acceptable and was changed to remove any reference to ‘German’ in relation to ‘Jewish’ or ‘Jews’. 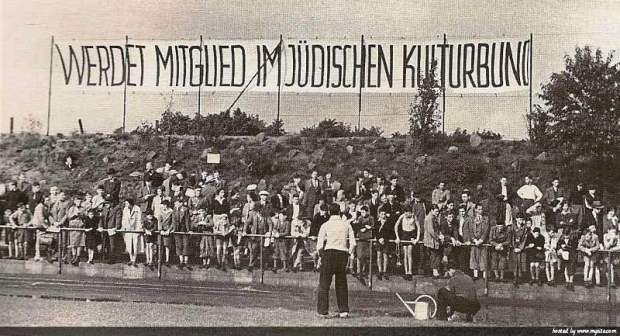 Other than emigration (which required money many Jews did not have), the only option left for those who wished to continue to perform (and earn a living) was with the Kulturbund, an organization which was separated from German society by only being allowed to perform for Jewish audiences. As further evidence of this separation from German society and culture (thereby ‘purifying’ it), their programmes were strictly controlled by officials under Hans Hinkel at the Ministry of Propaganda.

Nazi leaders justified the creation of the League, in part, by arguing that when Jews performed German masterworks they degraded and polluted them. In short, Jews could and should only create Jewish music.

The Kulturbund orchestra was thus increasingly required to perform only Jewish works (which proved very hard to define), but could also use (until September 1936) Arnold Schoenberg and non-German composers deemed to be ‘degenerate’ by the regime. This enabled the Nazis to show and tell the world how tolerant it was of both Jews and of non-German music while, at the same time, telling Germans that Jews were only fit to perform the music of degenerate artists. As Hirsch says,

By pointing to their support of the League, Nazi leaders could claim that Jews were not oppressed but encouraged to find their own forum for cultural expression. We can see this exploitation in newspaper articles and broadcasts from the period that point to the League as “showcase.” Through it, the world was to see how much freedom Jews had in Nazi Germany. As Hinkel bragged in a broadcast speech of 1935, the League had 25,000 members in Berlin, and probably 100,000 in the whole of Germany. These facts were to counter negative press abroad, and, as Hinkel himself explained, “refute the slanderous rumours circulating abroad and alleging barbarous treatment of the Jews in Germany.”

The Kulturbund also proved useful before and during the 1936 Berlin Olympics:

With international attention turned to Berlin for the 1936 Olympics, Hinkel even used the Kulturbund as a propaganda tool, announcing the high standards of productions and nightly sold-out performances.

Hirsch cites another reason for allowing the Jüdischer Kulturbund:

The creation of the League functioned as a mechanism of local social control by facilitating tighter policing of cultural activity and later Jewish activity in general. It also represented a means to quell any potential resistance by providing the many recently displaced Jews with a new source of income. Although the League could not employ all unemployed Jews, the jobs it did provide offered others hope for future economic stability.

By 1941, the Jüdischer Kulturbund had outlived its usefulness. Convincing the foreign media that the Nazis were not persecuting Jews was less relevant as Germany had either conquered or was at war with most of the countries it had previously been trying to mollify (the US being a notable exception of course). From late 1939, deportations of Jews became more frequent and Hirsch notes that

Hitler had also become committed to the elimination of European Jewry and had approved the mass deportation of German Jews eastward. Although the Final Solution was not discussed until the Wannsee meeting on 20 January 1942....Hitler’s approval of deportation was a decisive turn toward murder. Time had run out for Jews in Germany, and the Jewish Culture League no longer had a place in Hitler’s plans. As reason for the liquidation of the League, however, the secret police cited Paragraph 1 of the Reich president’s order of 28 February 1933 — for “the protection of people and state.”

However, this was not quite the end of the usefulness of Jewish musicians. Hirsch again, with reference to Theresienstadt concentration camp:

In May 1943, Nazi leaders invited members of the German press to the camp and encouraged them to attend a concert and witness a prescreened trial as evidence of the autonomous Jewish government and the Jews’ healthy cultural life.

A documentary was produced and, in 1944, the camp even passed an inspection by the Red Cross. Such was the power of Nazi propaganda.

Before the decision to kill all the Jews they could reach, the Nazi regime was interested in extracting as much as possible from Jewish-owned assets. It maintained a thin façade of legality, so simply confiscating them was more difficult than requiring them to be sold at low prices. However, musicians are only an asset if they can perform for audiences, and books are only an asset if they can find buyers.

The Jüdischer Kulturbund had been set up as an organisation to employ musicians who had been fired from other organisations, and provided music, talks, plays, and other culture to Jewish-only audiences.

At the end of 1938, the remaining Jewish-owned publishing companies were closed or taken over by non-Jews, but a publishing branch of the Kulturbund was allowed to be set up, and managed to acquire much of the stock of those publishers. The Propaganda Ministry only allowed this on condition that the Minister, Goebbels, could change any decisions of the organisation, or shut it down at will. However, he did not do this immediately, because it could produce foreign exchange, which was urgently needed, and was taken by the Nazi government. That paid the Kulturbund in non-convertible Reichsmarks.

That money was useful, however, because the Nazis at this stage allowed Jews who could obtain visas for other countries to leave. They were charged large "emigration fees," for which much of the Kulturbund's Reichsmark income was used. The rest of the world bears lasting shame for the limited number of Jews who were allowed to immigrate by other countries.

In September 1941, the Kulturbund was closed, apart from its publishing department, which continued under the control of the Reichsvereinigung der Juden in Deutschland. That organisation had been set up in early 1939 to assist in the emigration and deportation of German Jews. While it had a Rabbi as its honorary head, it was run by Adolf Eichmann and the Gestapo.

Why did the Nazis do all of this? There are quite a few interlocking reasons:

Not the answer you're looking for? Browse other questions tagged world-war-two nazi-germany nazism music propaganda or ask your own question.

18
Is Snyder's claim about Soviet-German friendship propaganda posters (1939‒41) supportible?
4
Are there any specific events which grants a soldier permission to execute a prisoner on sight? (Like in the movie: Fury)
7
Was Jud Suss a veiled criticism of Hitler?
11
Synagogue Scene in Der Ewige Jude: Looking for more information
3
How did the Allies locate, identify and process Nazi War criminals?
10
What is the earliest example of the usage of 'Nazis' to refer clearly and exclusively to the National-Socialists?
32
Could a German insult Hitler without being arrested?
6
Why didn't Nazi Germany destroy document archives while retreating from occupied territories?
9
How significant was the literary loss due to WWII?