Who is this young 'Prince'?

The photo below was found in an envelope among a bundle of family photos which were recently handed down on the English side of my family. 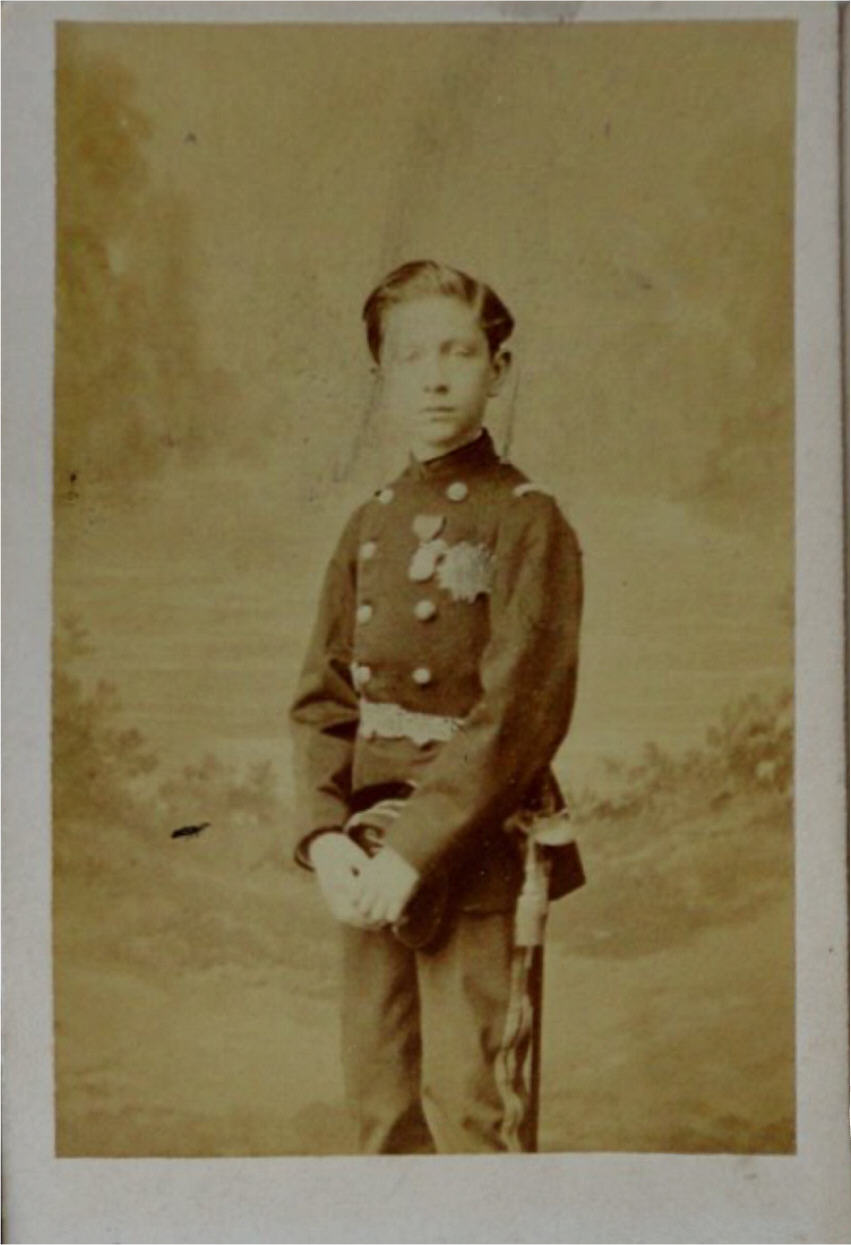 Aside from the photo itself, the only clues are as follows:

I'd be grateful for any information or additional clues which might lead to an identification of the boy. A definite answer to the main question would be great, but I don't know if there is enough information here for that to be possible.

I don't know uniforms well enough to be completely affirmative, but all your clues and the physionomy of the boy remind me of French Imperial Prince Napoleon, son of Napoleon III.

He was born in 1856 and the pictures on his wiki page show a strong ressemblance (in my humble opinion) with the boy on your photo. On this picture, he even wears a similar uniform. On this one, taken a few months before his death, he seems to wear the same decoration as on your photo. If I am correct, your photo would have been taken around 1868-70.

He would die in 1879 during the Anglo-Zulu War in South Africa.

Confirmation is provided by a comment from @Aaron Brick:
The page Napoleon Prince Imperial 1860s Paris France Royal French Cdv Photo By Levitsky has this photo on sale, dated and with more information as: 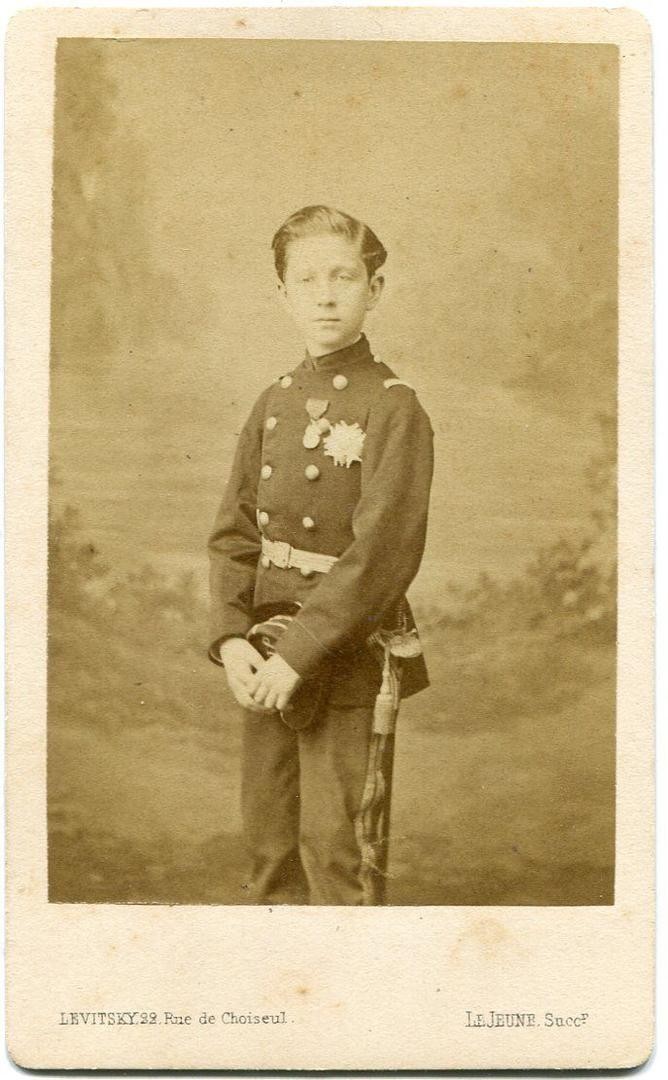 1860s CDV photo of Napoleon, Prince Imperial (1856 - 1879), who was the only child of Emperor Napoleon III of France and his Empress consort Eugenie de Montijo. After his father was dethroned in 1870, he relocated with his family to England. On his father's death in January 1873, he was proclaimed Napoleon IV, Emperor of the French by the Bonapartist faction. In England he trained as a soldier. Keen to see action, he successfully put pressure on the British to allow him to participate in the Anglo-Zulu War. In 1879, serving with British forces, he was killed in a skirmish with a group of Zulus. His early death sent shockwaves throughout Europe, as he was the last serious dynastic hope for the restoration of the Bonapartes to the throne of France (from Wikipedia). Photographer is Levitsky out of Paris, France.

To my eye this looks remarkably like Alexei Nikolaevich, son of Nicholas II and Alexandra - except it is alleged to be taken a generation earlier. This leads me to suspect that it is either Nicholas himself at a young age or his (look-alike) cousin George V. However quality photographs of both as youth are difficult to find on the web.

It is of course difficult to identify this based solely on family resemblance. As we know the European aristocracy of that time was so highly interwoven that is was said that Queen Victoria was the grandmother of Europe.

But age of the photo, outlook of the face, the expression around the eyes make one candidate stick out in particular: this seems to be the most promising prince of all, Victoria's favourite grandson: Wilhelm II of House Hohenzollern, future emperor of Germany.

Just judging the face and the expression on it (click to enlarge):

The face alone might be not entirely convincing, given the vast family network already mentioned. The giveaway might be the slightly crippled arm on display in the picture from the question, though. 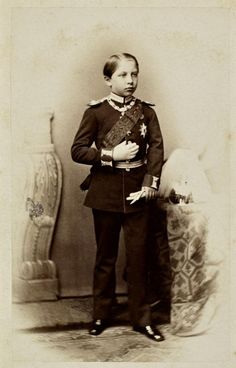 A traumatic breech birth resulted in Erb's palsy, which left him with a withered left arm about six inches (15 centimetres) shorter than his right. He tried with some success to conceal this; many photographs show him holding a pair of white gloves in his left hand to make the arm seem longer. In others, he holds his left hand with his right, has his crippled arm on the hilt of a sword, or holds a cane to give the illusion of a useful limb posed at a dignified angle. Historians have suggested that this disability affected his emotional development. (WP Wilhelm II)

The uniform in the question might prove a distraction and is not a 100% reliable indicator. Especially Wilhelm had a lot of desire in him to dress up:

That thing with the arm and hands said, this answer is now obviously less good than Evargalo's.

2
Who is this person?
12
Who is this, probably royal, teenager?
18
Who is in this c.1866 photo?
7
What is the approximate date of this photo?
16
Who was Frau Dr. Ebersberg?
18
Who are these people in this satirical cartoon of the Congress of Verona?
3
Who is this statue of?
1
Who is this particular inventor from XIX century?
2
Who is this Asian figure?