I was thinking about this as I lay me down to sleep last night, and came up with a null hypothesis:

At this point I decided to stop theorizing and just ask here where people might actually know. :)

A fully satisfactory answer would give a rough indication of how it was done in different periods if the available technology made any difference.

Most people just rose at dawn, or when the birds started their noise, like a rooster. Those few who really had to wake up earlier were usually woken up by 'specialists', like the Knocker up

Letting someone else wake you is just shifting the problem. How would those people wake up?

As long as a human keeps a fairly regular circadian rhythm with sleeping at night then there are several factors or biological mechanisms built-in, our own time keeper, synced to the Zeitgeber:

That is of course not a guarantee for waking up if you have to.

That's a problem common enough that even the ancients Greeks turned to artificial inventions. We can be sure that those who built the Antikythera mechanism had something up their sleeves.

Do not look further than Plato as the inventor of one of the first alarm clocks:

The alarm clock of Plato: The upper ceramic vessel supplies the next vessel through an (appropriately calculated for every case) outflow funnel. When the second vessel becomes full at the programmed moment (for example after 7 hours) through the internally located axial pipette, it evacuates fast towards the next closed vessel and forces the contained air to come out whistling through a tube at its top. After its function, the third vessel empties slowly (through a small hole located at its bottom) towards the lower storage vessel in order to be reused. 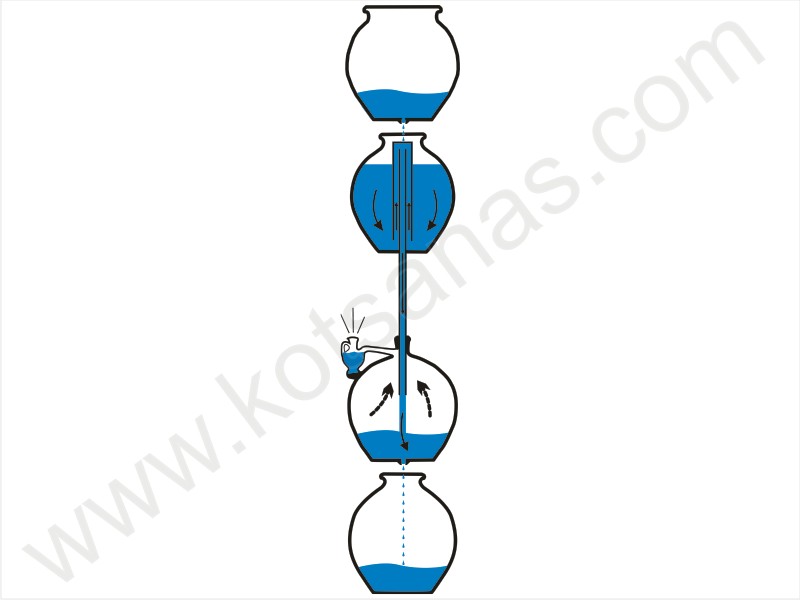 Archimedes and Aristotle also had their go at clocks.

So, they all did the same we do today from a certain point in time forward: either wake up naturally, or use an early form of alarm clock, if they could afford one.

And yes, before the industrial age and cheap artificial lighting, people had a much healthier sleep cycle, even if it was fragmented, for whatever reason.

An important point which no one has mentioned - for most people, the need to wake up 'on time' is a product of the industrial revolution so before that there was no need for alarm clocks. Waking up at an approximate time was good enough. These days our lives are dominated by schedules and timetables - this is most obvious with transport, something which people use far more than they used to (see Traveling in the Middle Ages for example).

Some people did have to get up at a certain time though but before alarm clocks one had to be able to tell the time so the Egyptians came up with sundials. The Greeks (see LangLangC) and Romans used water alarm clocks, and they also had slaves to wake them (not sure who woke the slaves though).

In China, Yi Xing invented a timepeice in 725 which was more than just an alarm. It's detailed here.

The clock was slightly more complicated than the average timepiece today, measuring not only time but the distance of planets and stars. A water wheel turned gears in the clock, with puppet shows and gongs set to emerge at various times.

These devices are interesting but very people had them, or needed them.

In some towns and cities people were woken by waits (also spelt waites).

Waits, who were present in "every British town and city of any note", were (usually) salaried bands of musicians who had a range of duties, one of which was sometimes to wake people.

From the earliest times, up until their abolition in 1836, they played about the streets of the town at night during the winter months. Sometimes this was combined with the duty of calling out the hour and the state of the weather, and, in sea ports, the state of the tide. In other places, they started in the early hours and played to wake people up for work. 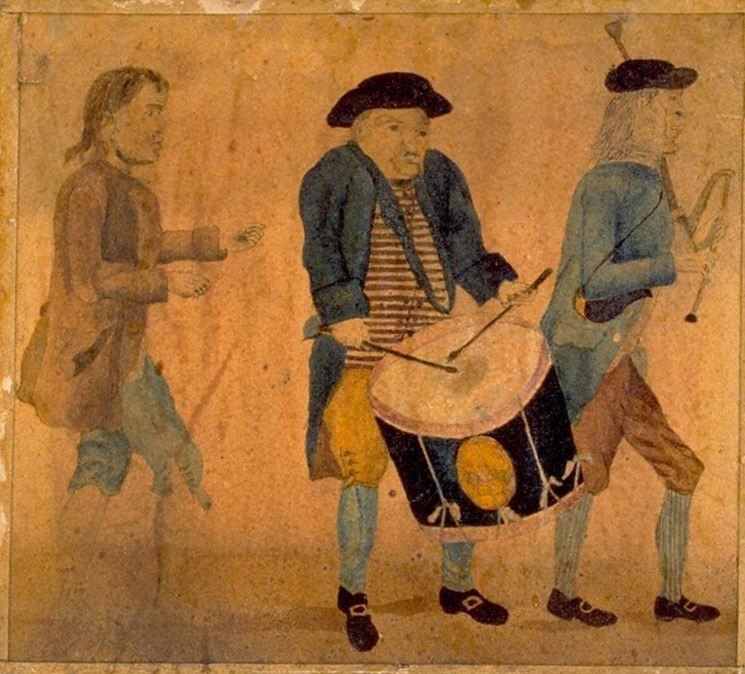 It depended on social class of these "people". Upper/and middle class people were woken up by their servants (if needed). Peasants had a habit to wake up with the sunrise. For factory workers, there was a siren (in the factory) which produced a very loud sound which could be heard far around. These factory sirens still existed (for example in Soviet Union) in the middle of 20th century.

Until the 1970s in some areas, many workers were woken by the sound of a tap at their bedroom window. On the street outside, walking to their next customer's house, would be a figure wielding a long stick.

The "knocker upper" was a common sight in Britain, particularly in the northern mill towns, where people worked shifts, or in London where dockers kept unusual hours, ruled as they were by the inconstant tides.

The other answers have given some great explanations on how people were woken up.

There's one thing that is missing though. As well as a relative lack of timetabled transport or precise work schedules, home life was in some ways more conducive to good sleep. In addition to the absence of electric lights, artificial light (candles) was very expensive up until relatively recent times.

For this reason, when it was dark, you went to sleep. You couldn't sew, read, cook or do anything else that you might have done in the daylight. Additionally, many more people had jobs that were physically active - also good at helping people sleep, and something which leads people to go to sleep earlier than they otherwise might.

In other words, they woke up early because they went to bed early, and slept all night.

0
How did people wake up early before clocks?
5
sense of time in people with no means for time measurement

25
Why did the clocks go back in Shanghai on December 31, 1927?
5
sense of time in people with no means for time measurement
3
How did ancient Dravidians tell the time?
1
How did they number the months when the year started on March 25th?
37
How did the ancient Greeks synchronize time?
2
What time zone was used in Sikkim before it became a state of India in 1975?
5
How did people in Athens 500 BCE refer to Homer's era?