Saints of the last two centuries whose existence is in doubt 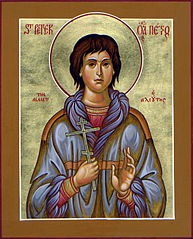 Saint Peter the Aleut, or Chukagnak, was supposed to have been a man from Kodiak forced to labor for the Russian-American Company and brought to California. According to his colleague Kyglaia, in 1815, Chukagnak was tortured to death by a Spanish mission priest because he refused to become a Catholic. He is venerated as a saint by at least some parts of the Eastern Orthodox Church. The story has been endlessly disputed.

Are there more recent saints (i.e. since 1815) of established religions whose very existence is in doubt?

Browse other questions tagged religion or ask your own question.

26
Why were Albanians the only nation in the Balkans who converted to Islam during the Ottoman occupation?
13
What historical evidence is there for the existence of Jesus Christ? What do we know about him?
4
Power over the centuries: spiritual vs. political vs. economic
21
What is the last historical mention of people worshipping the Roman gods?
6
Why was the spread of Christianity scattered compared to other major religions?
3
When was the last time the Catholic Church excommunicated a government official for political reasons?
2
During the English Civil War, did the Roundheads have any position on Martin Luther and other early leaders of the Reformation?
7
What was the last religion to become 'extinct'?
2
Why was James II and VII (same person), the last Roman Catholic monarch of Britain, not forced to convert to Anglicanism?