Is there a group picture of RMS Titanic's 8 officers?

This photograph was long believed to show Captain Smith and some officers from RMS Titanic. 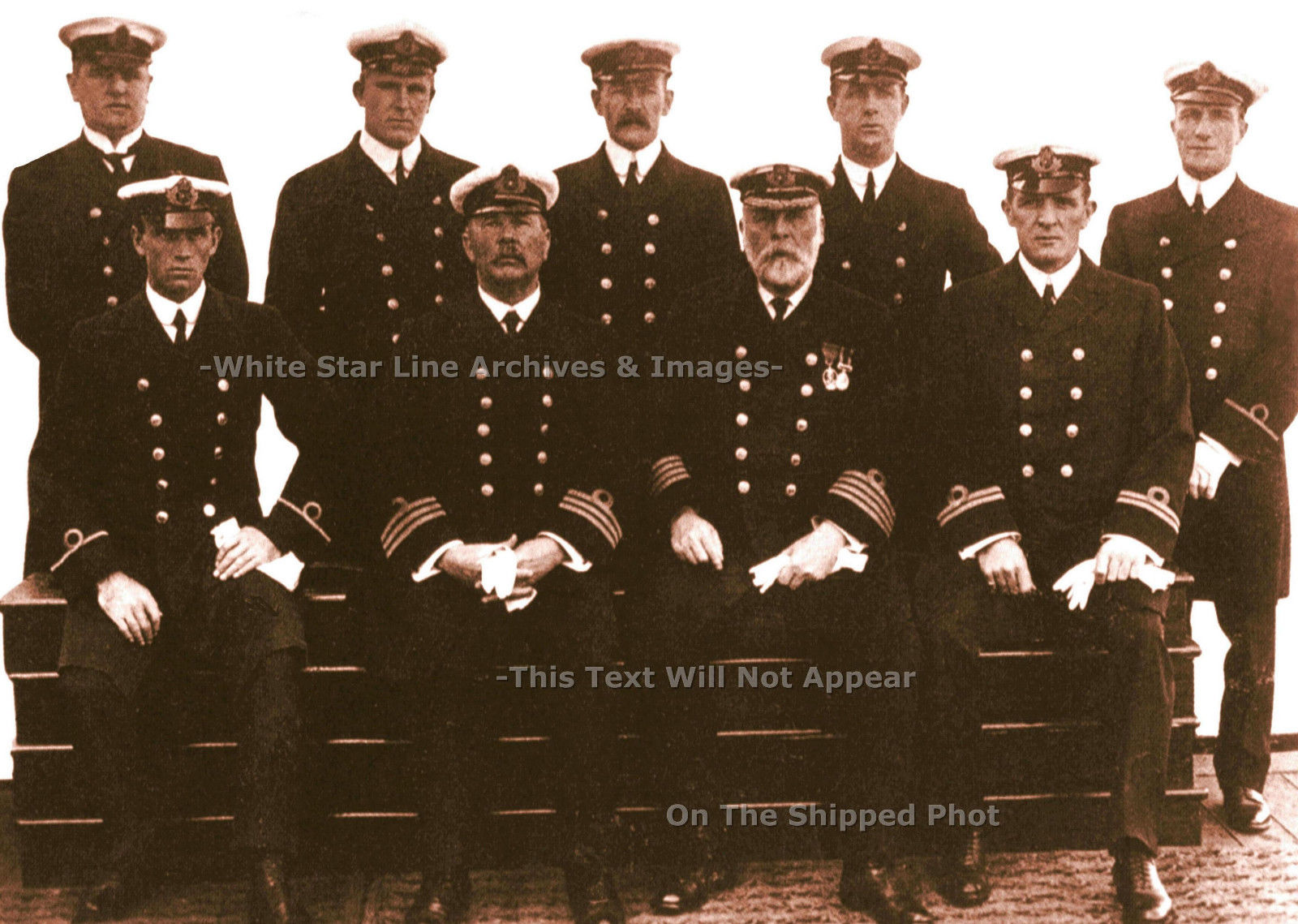 However, it actually shows Captain Smith and 8 of his officers from when he captained RMS Olympic. In order of left to right:

Is there a similar photograph for Captain Smith and his officers for RMS Titanic?

This is the old problem of proving a negative, but there is no evidence for a known group photo showing all of the Titanic's deck officers. Given the large number of Titanic books, sites and "enthusiasts", it seems highly improbable that such a photo would not have appeared somewhere online.

Further, one officer only joined the Titanic shortly before she sailed; while this does not make it impossible for a photo to have been taken before departure, the time frame was limited.

The Life and Mystery of William Murdoch, a website dedicated to the aforementioned First Officer of the Titanic, asserts

Although you may find photographs labelled "Titanic's Officers" the fact is that there is no known group photograph of Titanic's officer's prior to or during her fateful voyage.

Similarly, Inger Sheil, a Titanic researcher and author of Titanic Valour: The Life of Fifth Officer Harold Lowe has stated in the Encyclopedia Titanica forum Titanic Photographs & other Images that there is no photo of all the officers which has been made public and that

if such a photo was taken it is either no longer extant or exists in a private collection.

The surviving, known photo with the most Titanic deck officers in it would appear to be one that was taken of the four surviving officers. The colorized photo below was made possible

we can discover the height, eye colour, skin colour and any 'percularities' (such as tattoos) that each officer wrote in their application 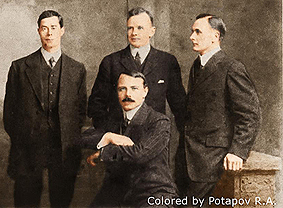 The 'original', larger, black and white photo can be seen here. For completion, the deck officers not in the photo above who went down with the Titanic were Captain Edward Smith, Chief Officer Henry Wilde, First Officer William Murdoch and Sixth Officer James Moody. Thus, in the OP's photo, only Smith, Murdoch and the purser Hugh McElroy were on the Titanic.

There is also this photo below, supposedly the last showing Captain Smith (I say 'supposedly' because the source is unclear). 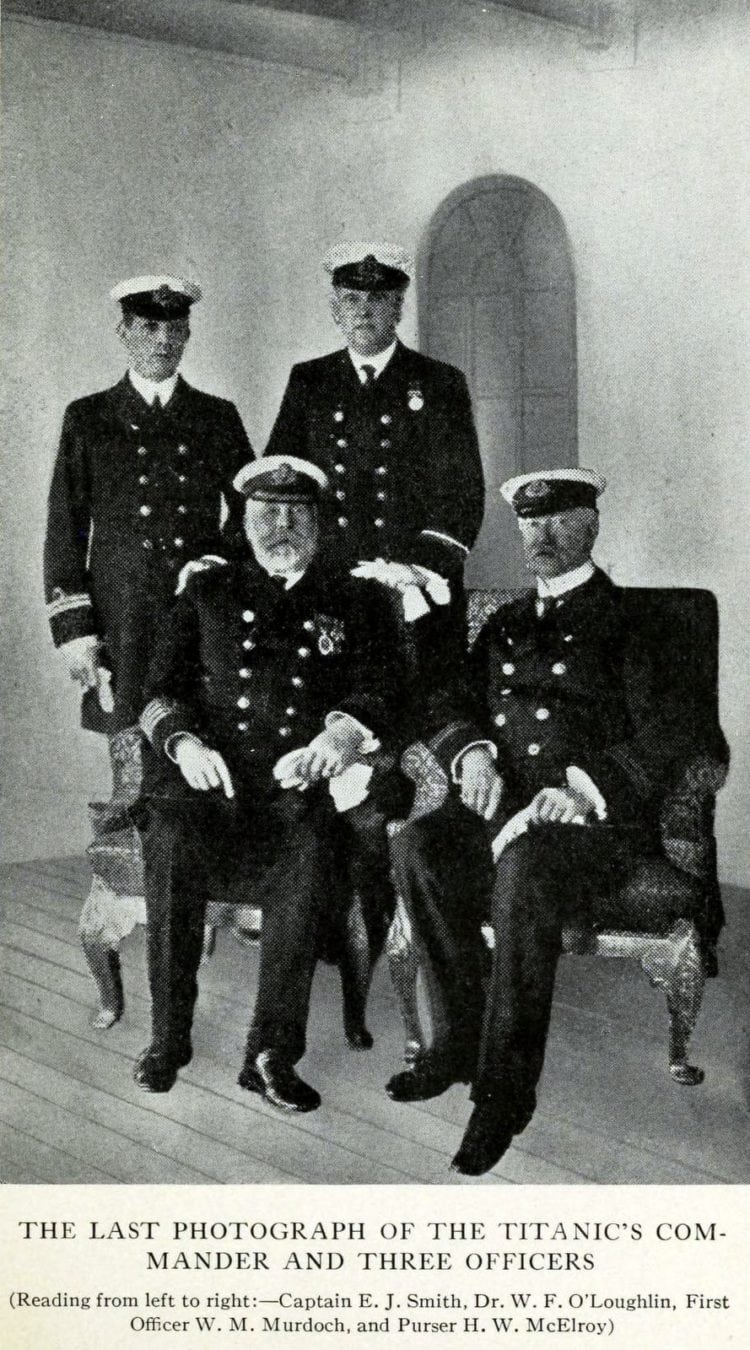 Note that the purser and doctor do not count as 'deck officers'. Image source

An article in the Irish Post relates how David Blair, who was supposed to sail on the Titanic as Second Officer, was reassigned when Henry Tingle Wilde was brought on board as Chief Officer. Tingle only boarded the Titanic at 6am on the 10th of April, six hours before she sailed. Although it is not impossible that a group photo was taken, Captain Smith and his officers may well have felt that they had better things to do than pose for photos on the morning of the departure of what was then the world's largest ship.

Not the answer you're looking for? Browse other questions tagged 1910s titanic or ask your own question.

7
Why was there a surge of writings about the Illuminati in America in the late 1910's?
37
Are there photos/footage of the Titanic sinking?
3
If SS Californian were within 5 miles of Titanic, could she have saved more passengers?
25
Was there a priest on the Titanic who stayed on the ship giving confession to as many as he could?
5
Are there contemporary records of why flappers used cosmetics to create thin, upturned eyebrows?