Did Constantine I of Cilician Armenia usurp the throne or did he rule legitimately?

The accounts concerning four brothers who became Kings of Cilician Armenia towards the end of the 13th century tell a tale of murder, usurpation and treachery, but who betrayed who and when is far from clear from the Wikipedia pages. Cilician Armenia was a key ally of Christian crusaders but surrounded by Muslim states (see map below). 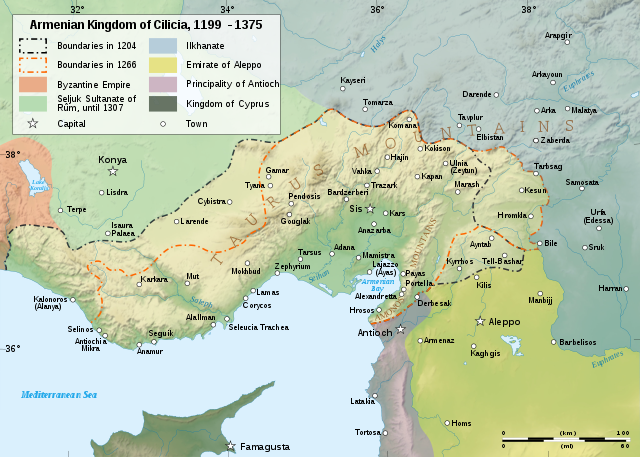 This much seems consistent:

So, Sempad rules for two years. Then, in 1298, it gets confusing. The article on Hethum II says:

In 1299, Hethum, recovered at least partially from his blindness, ousted Constantine and once again resumed the crown.

The article on Constantine has a different version, saying Constantine

turned against him [Sempad] two years later in 1298 to restore his older brother Hethum II. He assumed the throne for a year while Hethum recovered from his imprisonment.

The article on Sempad says:

In short, the first account basically says Constantine usurped the usurper (Sempad) as well as Hethum while the other two accounts imply Constantine was simply looking after the throne for Hethum. Also, the page on Constantine says nothing about him being a usurper while the page on Hethum clearly states that he was.

As Hethum had already abdicated once (and was to do so again in 1303), the latter two accounts seem plausible. On the other hand, Constantine changed sides again in 1299 in an attempt to restore Sempad (it failed and they were imprisoned). Mack Chahin's book The Kingdom of Armenia: New Edition might clear this up but a key page is not available for viewing.

Did Constantine rule as a usurper or was ruling legitimately in Hethum's place, with the latter's consent?

Browse other questions tagged middle-ages monarchy armenia or ask your own question.

7
Did anyone ever win a kingdom through single combat without a backing army or blood tie to the throne?
16
What was the reaction to English monarchs using the title “King of France”?
9
Was there a case where a king died while the heir to the throne was unborn?
2
In which modern-day location did the historical battles of Bagrevand happen?
28
Was there a King of England, or an heir to the throne, in 1831 who idolized Michael Faraday?
4
What authority did the Catholic Church have over European monarchs from 900–1450?
3
What did the Musa Dagh monument look like?
4
Which head of state had the most gaps in their rule?