Which Allied aircraft scored the most air-to-air kills against the Me 262 in WWII? 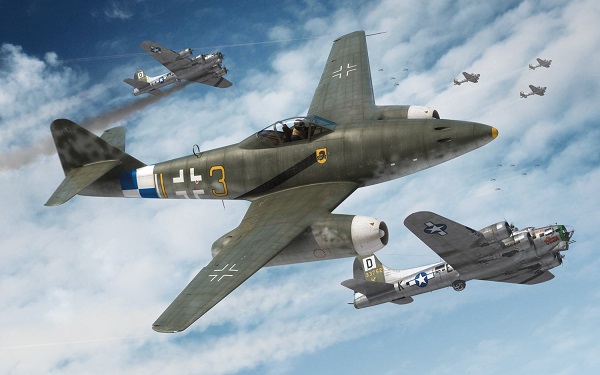 The Schwalbe (German: "Swallow") fighter version of the Messerschmitt Me 262 was the first operational jet-powered fighter aircraft, with the first test unit having been formed on 19 April, 1944 as documented in the Operational History section of the Wiki article cited.

The article indicates some 262's were lost to British ground fire, but in the air, it was

Too fast to catch for the escorting Allied fighters, the Me 262s were almost impossible to head off. As a result, Me 262 pilots were relatively safe from the Allied fighters, as long as they did not allow themselves to get drawn into low-speed turning contests and saved their maneuvering for higher speeds.

This is not say the Me 262 was invulnerable to enemy fighters:

The Me 262 was difficult to counter because its high speed and rate of climb made it hard to intercept. However, as with other turbojet engines at the time, the Me 262's engines did not provide sufficient thrust at low air speeds and throttle response was slow, meaning in certain circumstances such as takeoff and landing, the aircraft became a vulnerable target.

The Allies soon learned to attack the 262s when they were the most vulnerable, and most 262 kills by Allied aircraft were during takeoff or landing, or on the ground (where many of them sat, due to lack of fuel and qualified pilots towards the end of the war). As the Wiki article confirms:

Allied pilots soon found that the only reliable way to destroy the jets, as with the even faster Me 163B Komet rocket fighters, was to attack them on the ground or during takeoff or landing. Luftwaffe airfields identified as jet bases were frequently bombed by medium bombers, and Allied fighters patrolled over the fields to attack jets trying to land... On 7 October 1944, Lt. Urban Drew of the 365th Fighter Group shot down two Me 262s that were taking off, while on the same day Lt. Col. Hubert Zemke, who had transferred to the Mustang equipped 479th Fighter Group, shot down what he thought was a Bf 109, only to have his gun camera film reveal that it may have been an Me 262. On 25 February 1945, Mustangs of the 55th Fighter Group surprised an entire Staffel of Me 262As at takeoff and destroyed six jets.

The British Hawker Tempest scored several kills against the new German jets, including the Messerschmitt Me 262. Hubert Lange, a Me 262 pilot, said: "the Messerschmitt Me 262's most dangerous opponent was the British Hawker Tempest—extremely fast at low altitudes, highly manoeuvrable and heavily armed." Some were destroyed with a tactic known to the Tempest 135 Wing as the "Rat Scramble": Tempests on immediate alert took off when an Me 262 was reported airborne. They did not intercept the jet, but instead flew towards the Me 262 and Ar 234 base at Hopsten air base. The aim was to attack jets on their landing approach, when they were at their most vulnerable, travelling slowly, with flaps down and incapable of rapid acceleration. The German response was the construction of a "flak lane" of over 150 emplacements of the 20 mm Flakvierling quadruple autocannon batteries at Rheine-Hopsten to protect the approaches. After seven Tempests were lost to flak at Hopsten in a week, the "Rat Scramble" was discontinued.

But there were actual air-to-air 262 kills:

Major Walter Nowotny was assigned as commander [of Erprobungskommando 262 formed at Lechfeld just south of Augsburg, the first operational 262 unit] after the death of Thierfelder in July 1944, and the unit redesignated Kommando Nowotny. Essentially a trials and development unit, it mounted the world's first jet fighter operations. Trials continued slowly, with initial operational missions against the Allies in August 1944, and the unit made claims for 19 Allied aircraft in exchange of six Me 262s lost. [emphasis added]

During March, Me 262 fighter units were able, for the first time, to mount large-scale attacks on Allied bomber formations. On 18 March 1945, 37 Me 262s of JG 7 intercepted a force of 1,221 bombers and 632 escorting fighters. They shot down 12 bombers and one fighter for the loss of three Me 262s. [emphasis added]

Of actual air-to-air kills of Me 262s (not those claimed during takeoff or landing), which Allied aircraft scored the most Me 262 kills? The Hawker Tempest? The Spitfire? The P-51D Mustang? The P-47 Thunderbolt? The IL-2? The Yak-9? B-17 waist or turret gunners perhaps? Something else entirely? Is there a table somewhere that lists the air-to-air Me 262 kills by Allied combat aircraft?

All quotes listed here are from the Wiki article referenced above.

By combining the three tables, of known Me262 losses; claims by USAAF; and claims by RAF, in Foreman, Me 262 Combat Diary (1990), assuming that the German numbers are correct, and also that all the dates are as stated, I have obtained the following statistics. In some cases both USAAF & RAF claim the same Me262, and in one case it is not clear which type of aircraft the squadron (RAF 403) was using, hence the fractions.

(The figures are not totally reliable. I have found twelve pairs of duplicate Werknummers, i.e. planes that were apparently destroyed twice. There is a newer edition of the book, but I do not have it.)

Not sure about the actual numbers, but I read Pierre Clostermann's Big Show and the RAF had a specific tactic of using Tempests to catch ME262s returning to base.

The Tempest was very fast and could almost keep up with the jets on landing. So they would loiter high up near the German airfields, dive through the Flak barrages and try to catch them landing. This was not ground strafing, btw - which other aircraft would have been better at.

I would say Mustang's shot most down, because there were more of them escorting bombers and ground strafing.

17
Why were so few Luftwaffe attacks flown against the Normandy beaches on 6 June 1944?
3
Is there a written history on the Sonderkommando Elbe?
18
Why did few French and no Dutch pilots (but many Poles and Czechs) take part in the Battle of Britain?
4
Did the United States taxpayer fund the development of China's backbone fighter plane?
2
Why did Sidewinder missiles score so well before Vietnam?
29
Historically, why did the US station their nuclear weapons in Germany for delivery through German pilots?
9
What WWII fighter raid did my great-uncle misremember?
3
During the WWII, did the German Luftwaffe ever have mixed units of Bf-109s and Me-262s, and if so, which units and/or which airfields?