Here is an excerpt of a 19th century book by Professor Rafinesque:

"The Native American Negroes or black Indians have been seen in Brazil, Guyana, Caraccas, Popayan, Choco, North California and etc:

The Aroras or Caroras of Cumana, were black, but with fine features and long hair, like the Jolofs and Gallas of Africa.

The Esteros latitude 32, are like the Hottentots and the Numuquas, Tambukis, and many other Nigritian tribes, not black, but dark brown, yet complete Negroes, with large thick lips, broad flat noses, and very ugly, with hair crisped or curly. All these tribes live in New California The Aroras or Caroras of Cumana, were black, but with fine features and long hair, like the Jolofs and Gallas of Africa.

The American Negroes of Quarenqua, in Choco, (the great level plain 900 miles long, 90 wide, separating the Andes of South America from the mountains of Panama,) were black and with woolly heads in 1506. They are mentioned by Dangleria, and all the early accurate writers.

The Yemasees or Jamasi were remarkably Black people Notices of Florida and the Campaigns; The Ancient Caracoles of Hayti, represented as a Nation of Beasts by the Historical Songs

The Califurnams of the Carib Islands, called Black Caribs or Guauini by others, are a black branch of Caribs.

The Arquahos of Cutara mentioned by Garcias in the West Indies, quite black.

The Aroras of Raleigh or Yaruras of the Spaniards, ugly black or brown Negroes, yet existing near the Oronoco, and language known, called Monkeys by their neighbors The Chaymas of Guyana, brown Negroes like Hottentots,

The Nigritas of Martyr in Darien, yet existing in Choco under the name of Chuanas or Gaunas or Chinos (Dariente). Ugly black or red Negroes.

The Manabies of Popayan (in Columbia) blackish with Negro features and hair.

The Guabas and Jaras of Tagugalpa (Tegucigalpa) near the Honduras. The Enslen or Esteros of New California, ugly blackish Negroes.

The black Indians met by the Spaniards in Louisiana in 1543.

The Moon-eyed Negroes, and Albinos, destroyed by the Cherokees, and seen in Panama."

This is a huge load of information. So I will like to know the position of modern scholarship on this issue. I would also like to know the credibility of this writer, and the factors that may have led him to publish this work.

It is certainly true that Rafinesque classified native American peoples as 'Negroes'. However, I can find no evidence that Rafinesque's classification was ever widely adopted.

The quotes that you list are extracts from the first of Rafinesque's Four Letters on American History published in the Saturday Evening Post in Philadelphia (7 June 1828). Although I couldn't find the newspaper itself (except behind paywalls) I did find a transcript so you can read it in full.

The article The Primitive Black Nations of America, was published in the September 1832 issue of the journal Atlantic Journal and Friend of Knowledge, which was founded and edited by Rafinesque. He mentions that these claims were also in one of two 'memoirs' submitted to the Société de Géographie in Paris.

He tells us that the other memoir apparently rendered it

probable that all the Negroes originated in the Southern Slopes of the Imalaya [sic] Mountains.

Needless to say, neither this theory, nor his classification of Native Americans as Negroes is supported by modern scholarship.

In The life and writings of Rafinesque : prepared for the Filson Club and read at its meeting, Monday, April 2, 1894, we are told that:

The Société de Géographie gave him its gold medal, in 1832, for two memoirs on "The Primitive Negroes of Asia and North America", but these essays were never published.

We are also told that:

The present whereabouts of this medal is unknown. In 1876 it was in possession of Doctor William Kent Gilbert, of Philadelphia.

Volume VI of Potter's American Monthly has been digitised and can be read on Google Books. The illustration appears on page 99: 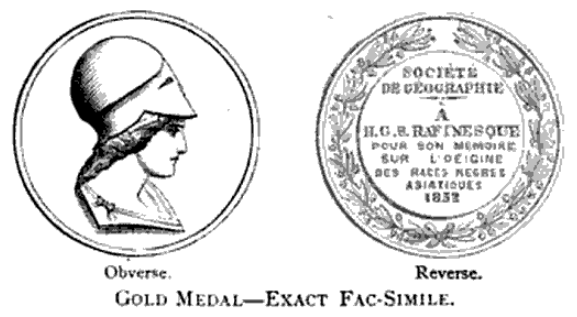 It is interesting to compare the design with the first gold medal which was awarded to Captain John Franklin by the Société de Géographie in 1829: 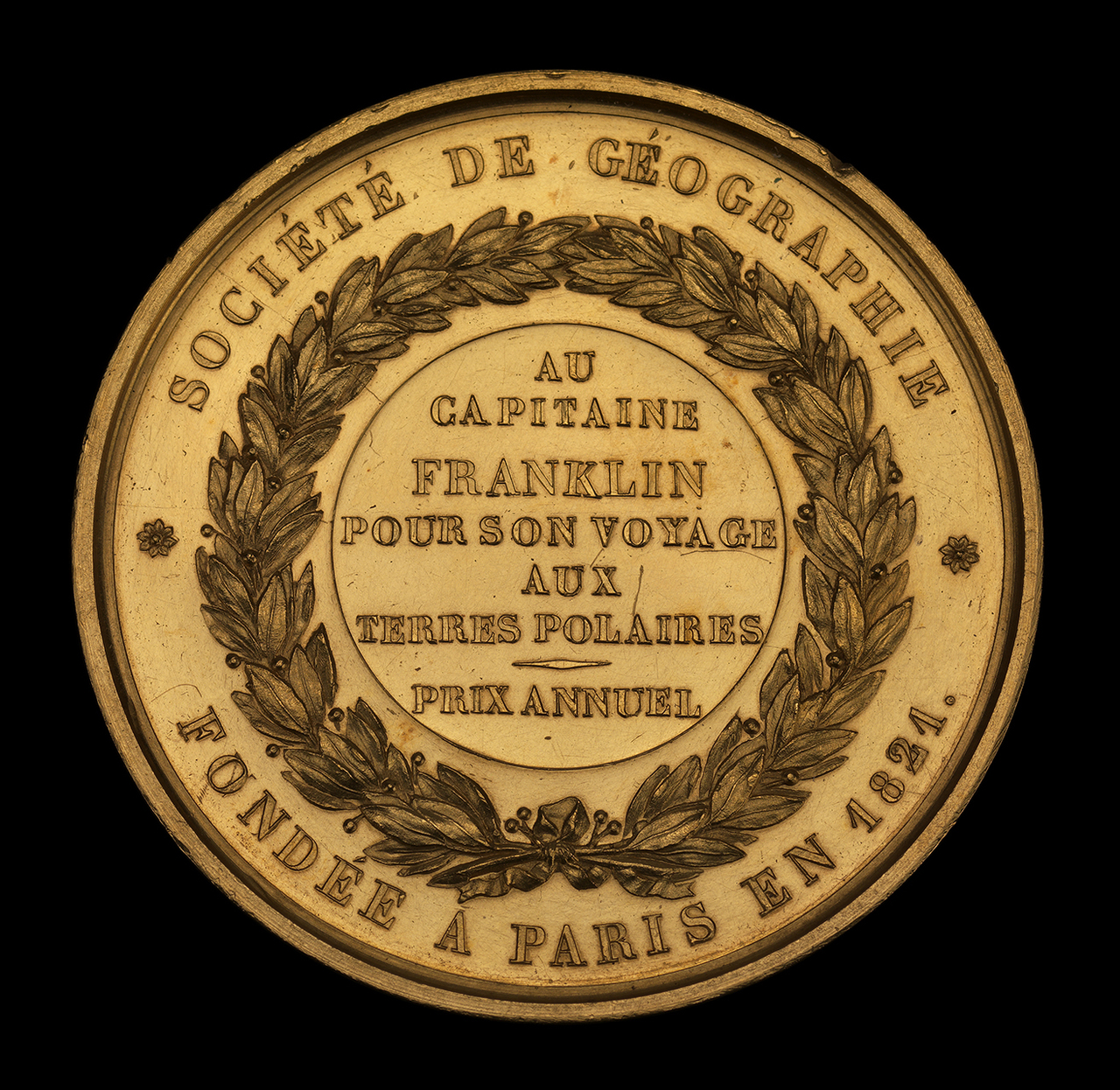 Which does exhibit some similarities, but also some significant differences. Of course, it is possible that the design of the medal had changed.

Wikipedia has a list of recipients of the Grande Médaille d’Or des Explorations et Voyages de Découverte (Great Gold Medal of Exploration and Journeys of Discovery) from the Société de Géographie. However, this shows that the medal in 1832 was awarded to Jean Baptiste Douville.

Perhaps Rafinesque was awarded some other gold medal by the Société de Géographie.

Constantine Samuel Rafinesque is often described as an autodidact, an eccentric, or a flawed genius. He has also been described as "complex" and "erratic and difficult"!

The language in the extracts you have provided is offensively racist, even by the standards of the early nineteenth century but, as far as I can see, they do not appear to be atypical examples. This might account for some modern descriptions of him as a "complex" character.

An autobiographical sketch of his life and bibliography was published by T.J. Fitzpatrick in 1911, while the view of modern scholarship on his work is covered fairly well in his Wikipedia article.

However, one well-documented example from his work - the story of Walam Olum - may give us some insight into the character and credibility of the man.

In 1836, Rafinesque published what he claimed to be an English translation of the entire text of the Walam Olum in his first volume of The American Nations. He subsequently claimed that the original tablets and transcription had been lost (although he never furnished details of how they had been lost), leaving his notes and transcriptions as the only surviving evidence.

We now know that Walum Olum was a hoax, but the question of whether Rafinesque was the perpetrator or victim of that hoax has lingered. Modern scholarship on the matter does seem to suggest that his role was that of the former.

Not the answer you're looking for? Browse other questions tagged united-states slavery native-americans americas or ask your own question.

19
What did Native Americans know, or speculate, about the Old world?
6
Why did Confederate General Forrest leave the KKK?
0
Why did Europeans call Native Americans Indians in the 18th Century AD, After they had found out they were in the wrong continent?