Did any age of sail ship have a "back-bone cannon"?

Did any age of sail ship have a "back-bone cannon"? What I mean by "backbone-cannon" is a cannon too large/heavy to be carried other than by having the ship being essentially built around it. This would keep the cannon from being aimed (or at least aimed a lot) without turning the whole ship.

Modern "backbone" cannons include the cannon on the A-10, MI-24 (some variants), and the Swedish S-tank (Stridsvagn 103 - you aim it by turning the tank or raising the suspension).

The benefits to these are "obvious" - you would carry a heavier/longer-ranged cannons than any of the ships of the same size. The downsides are aiming, rate of fire, recoil management, etc.

Yes, these existed and were generally known as gunboats. Sizes varied, but typically they were a galley, schooner, or sloop of less than 75 feet in length, single-decked, with a single large cannon (often 24 or 32 pounds) pointing forward. There were also variants that would have a gun fore and aft, one gun forward and one to either side, etc.

The early American navy included large numbers of these (in addition to the better known heavy frigates, USS Constitution et al.) They were typically used for harbor defense and inshore operations, and had a shallow enough draft to hunt smugglers in bays, inlets, and rivers. The concept was termed a 'mosquito fleet'- useful for customs and defense, but not an offensive weapon that would threaten the British navy. Of course, this didn't prevent the War of 1812 from breaking out, and the idea was abandoned postwar in favor of a blue-water navy.

Another notable use was by the Barbary corsairs, as (in galley form) they made effective piracy vessels. When taking merchant ships, one large cannon posed enough of a threat to induce surrender, and the galleys were usually fast and maneuverable enough to evade naval vessels powered by sail alone that would beat them in a straight-up fight.

Starting around the middle of the nineteenth century, the concept generally morphed from "vessel with one gun forward" to "small vessel capable of navigating rivers", leading to the term "gunboat diplomacy", when they were dispatched around the world to threaten port cities of nations that were uncompliant with the demands of European powers.

I'm not aware of any ship built around a single cannon during the Age of Sail, although it's possible that they appeared as experimental vessels.

At the smaller end, there were gunboats which had a single cannon on the centerline, which were used for coastal operations by most of the European nations. These could be operated from harbours or the shoreline or from the deck of a warship. As the Wikipedia article mentions these used weight of numbers to overcome larger vessels.

As @Pieter Geerkens mentions in a comment, there were larger vessels built around a single weapon. These were known as a bomb vessel or bomb ketch, as they were built around a large calibre mortar. The support for the weapon required significant strengthening of the ships decks and hull to support the weight of the weapon and to absorb the recoil.

They were intended for shore bombardment but often found themselves being used in a secondary role (such as convoy escorts) and, therefore, they generally had a secondary armament of conventional cannon along their broadsides. On the early versions the mortar was in the front of the ship and fired over the bow. Larger, later versions often had a second mortar behind the first and these both fired to the side of the ship.

So what are the limitations of putting a large cannon on the 'backbone' of the ship? For a sailing ship, a key problem is the design of the ship's bow itself. The ship's bowsprit, which runs inline with the ship's centerline and is a key part of the ship's rigging, would be in the way of any cannon mounted on the upper decks. Mounting the gun lower would leave its gun port in great risk of flooding the vessel (the hatches on gun ports weren't particularly watertight) and would render the gun unusable in anything but the smallest seas.

Fixing a large gun would complicate loading, more so for a large, long cannon. The broadside cannon were mounted on carriages that allowed the gun to be run out to fire and the recoil would bring the gun back inside for reloading (while early cannon on fixed mounts required some of the gun crew to be outside the hull of the ship to reload with all of the obvious dangers that brought). Putting a large cannon on a moveable carriage would require a lot of manhandling, complicated rigging to secure it and a great risk to the ship if it broke away from it's securing ropes or carriage.

Ships of the age of sail never had guns so large as to be built into the hull, as its dominant feature, which seems to be what the question is about. Such a gun would be far larger than the ordinary naval guns of the period, with a much heavier projectile.

Metallurgy and casting in the age of sail were simply not up to the task of making a gun of such size that was safe enough and light enough to build a ship around. Had such a thing been built, it would have destroyed the ship when it burst, and no sensible sailor or officer would have been willing to man it.

It would also have been impractical to load, if were it a muzzle-loader, since the ball and charge needed to be rammed firmly into place to get some kind of consistency in loading. Firing a breech-loader of the time with its breech below decks on a wooden ship would have set the ship on fire for certain. Before obdurators were invented, in the nineteenth century, breech-loaders inevitably leaked super-heated gas from the breech.

The ball would have been too heavy to load without a crane, which would have been terribly slow. It would also have missed all the time: naval guns were quite inaccurate, and you needed a number of them to get hits at any significant range. Really, nobody with the faintest glimmer of sense would have tried it, and it never was tried.

Somewhat similar things that did happen were:

These were specialised vessels for bombarding fixed positions on land. They used large mortars, rather than long-barrelled canon or carronades for this task, and fired in high arcs. They were usually fired when the ship was anchored, using two anchors, one each at bow and stern, and aimed by adjusting the ship's positioning via the anchor lines. That allows far more precise aiming than can be achieved from a sailing ship under way. Later ships had the mortars on rotating platforms, but the ship would normally still anchor to fire.

There was a period in the late 19th century, before TNT and other stable explosives became available in quantity, when the only explosives available were black powder, nitro-glycerine and dynamite. Since by this time explosive shells were standard for all naval guns, there was a desire to use more powerful explosives in them than black powder. Nitro-glycerine was impractical and dynamite was too sensitive to fire from ordinary guns - the shells would detonate in the gun's barrel.

There was an attempt to use huge air-guns to fire dynamite shells, and USS Vesuvius was built as a test-bed for them, with three guns built into the hull. Trials showed that the achievable range was too short, and that aiming the ship accurately enough was impractical. The aiming problem could have been solved by firing from anchor, but then the ship would have been exposed to every artillery piece that could be moved close on shore.

There were plenty of small vessels that had a single large canon on the centreline, but the questions seems to be about full-sized ships.
Share
Improve this answer
edited Sep 11, 2018 at 20:07
answered Sep 11, 2018 at 18:26

The question was about sail age, wasn't it? The galleys and galeases were build around a single gun. And for some time they were considered more effective than side-gunned ships - due to the sheer size of a great cannon. 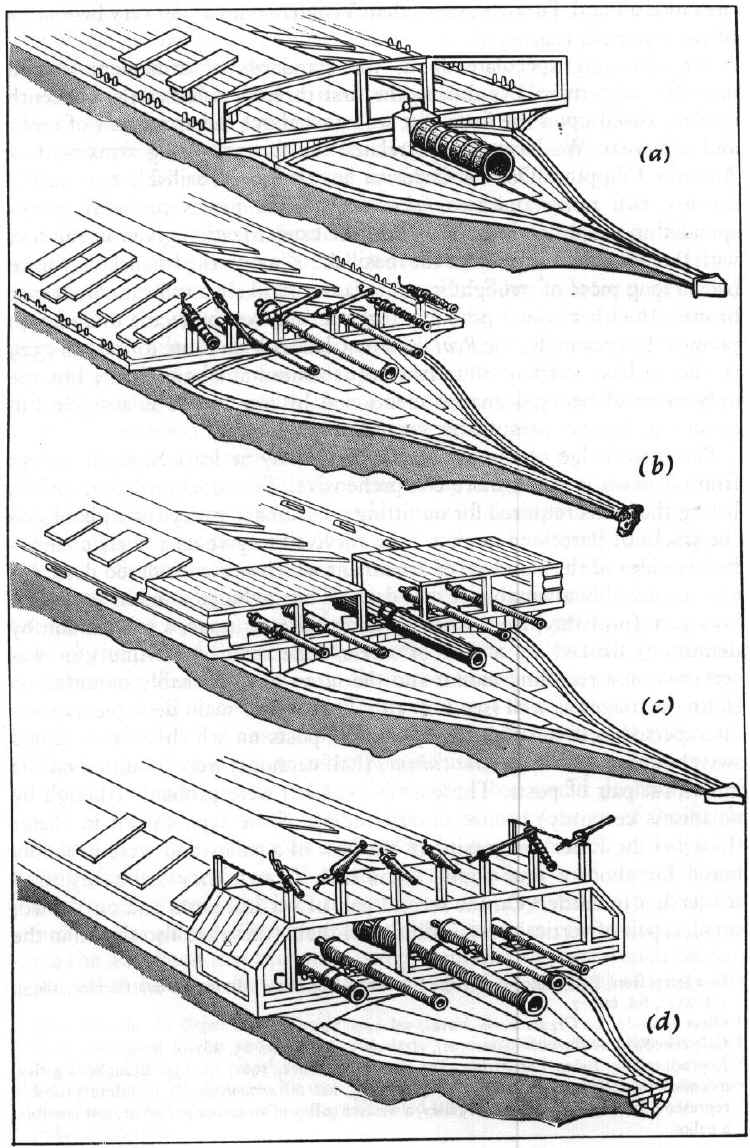 Other answers have commented about several types of ships that had a "one big gun" approach, but none of them seem to approach what the OP means (a ship build around a gun).

You have stated some serious issues with that design, I would like to point to another that was experienced by ships of the age.

The big issue would be stability. Ship design in general was a tradeoff between height and stability. The taller the ship, and the higher the guns were positioned, the better advantage in combat (range, protection from enemy fire, visibility). Also, the higher the gun ports, the less probable for water to enter through them1.

But also, the taller the ship and the higher the cannons, the more unstable ships would be. Ships are in the sea, and pushed by the waves. Maybe even worse, their power source is being pushed by the winds through some poles attached to the top of the ship2. Get pushed too much, and the ship will capsize. That is not pretty.

To show how delicate that can be, let's remember the Swedish ship Vasa. It sunk in 1628, in its maiden voyage, the first time it encountered a wind stronger than a breeze. And remember that it was a ship built by experienced shipbuilders.

So, your big, heavy gun would have to be moved pretty low in the ship in order to ensure the ship stability. In turn, that would mean:

1 Ship design first principle can be expressed as "keep the water outside the ship".

Not the answer you're looking for? Browse other questions tagged weapons age-of-sail or ask your own question.