How frequently did the KMT use telegrams to communicate; from where (roughly) and to whom?

This answer to the Chinese Language SE question Historical: How was Chinese written in telegrams and early computers? says (in part):

and contains the image below.

Question: How frequently did the KMT used telegrams to communicate, from where (roughly) and to whom?

As pointed out in comments (1, 2) the data may never have been considered particularly "secret" as the code book in the image was used primarily to change Chinese characters encoded as numbers (a form transmittable via telegram; a method of endoding) into Japanese. See also Ciphers vs. Codes. 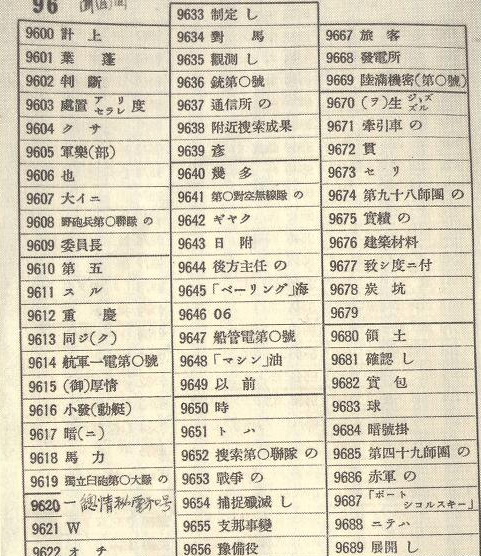 You might be interested in a paper "Decryption in Progress: The Sino-Japanese War of 1894-1895" appearing in pp. 9-20 of an issue of The Cryptologic Quarterly by Greg Nedved. This well-documented paper describes use of code books for encryption purposes by the Chinese government half a century before the time frame of the OP's question.

I am not myself an expert in the period or the region, but will bravely hazard: that the KMT used such cryptography often, between various headquarters for all official business. As did all armies throughout the world at the time. For various reasons military organizations prefer written orders and reports to spoken ones, and the telegraph (in the forms of manual Morse or teleprinter, carried by land line or radio) were the timeliest and (hence) main means of sending them. The nature of the Chinese writing system makes the use of code books, whose digital code groups might be subject to so-called superencipherment, more practical than then the use of cipher machines like the famous Enigma machine used in Germany up to the end of the Second World War.

Not the answer you're looking for? Browse other questions tagged world-war-two military china communication or ask your own question.

6
Did the US manage to eavesdrop on KMT communications during World War 2?

17
How frequently were homing pigeons used in the World Wars?
12
How did diplomats of the Axis powers travel and communicate among themselves in World War II
19
How did the Allies communicate during World War II?
3
Why were the 8th Route Army better at fighting the Japanese than the Nationalists were?
6
Historically, how did people living in distant regions communicate?
6
Did Mao Zedong and Chinese communists collude with the Japanese during the Sino-Japanese War?
6
Did the US manage to eavesdrop on KMT communications during World War 2?
80
Why exactly did telegraphs have to use "STOP" instead of a period and "QUOTE" instead of a quotation mark? (Or special codes.)
40
Why couldn't Japan crack the Navajo Code in WW2, when they captured a Navajo native speaker?