Why was France's birth rate low from 1800 to WWII?

Inspired by this lemma on Wikipedia as well as a few paragraphs here and there in Piketty's Capital in the 21st century I'm asking the question how the low birth rate in France between 1800 and WWII could have come about. I see two separate dimensions to this question:

1) What is the socio-economic and/or cultural cause of this low birth rate: e.g. did the French inheritance laws indeed play that big a role (as the Wikipedia page suggests).

There is currently no consensus about 'the one cause', or even one commonly accepted explanation. This is very complicated. Only several aspects of a multitude of influence factors are discussed in an ongoing debate about the demographic transitions. Answers to this question that claim to have found the solution are usually totally inadequate for explaining the phenomenon then and try to promote a political agenda now.

Contrary to a common myth contraceptive methods like condoms and the pill are by far not the only means birth control was historically employed. That means that point 2 of the question is of low importance for this question.

First of all, is it true that France had a comparatively low birth rate during the 19th century?

A gapminder graphic says yes for an observable decline: 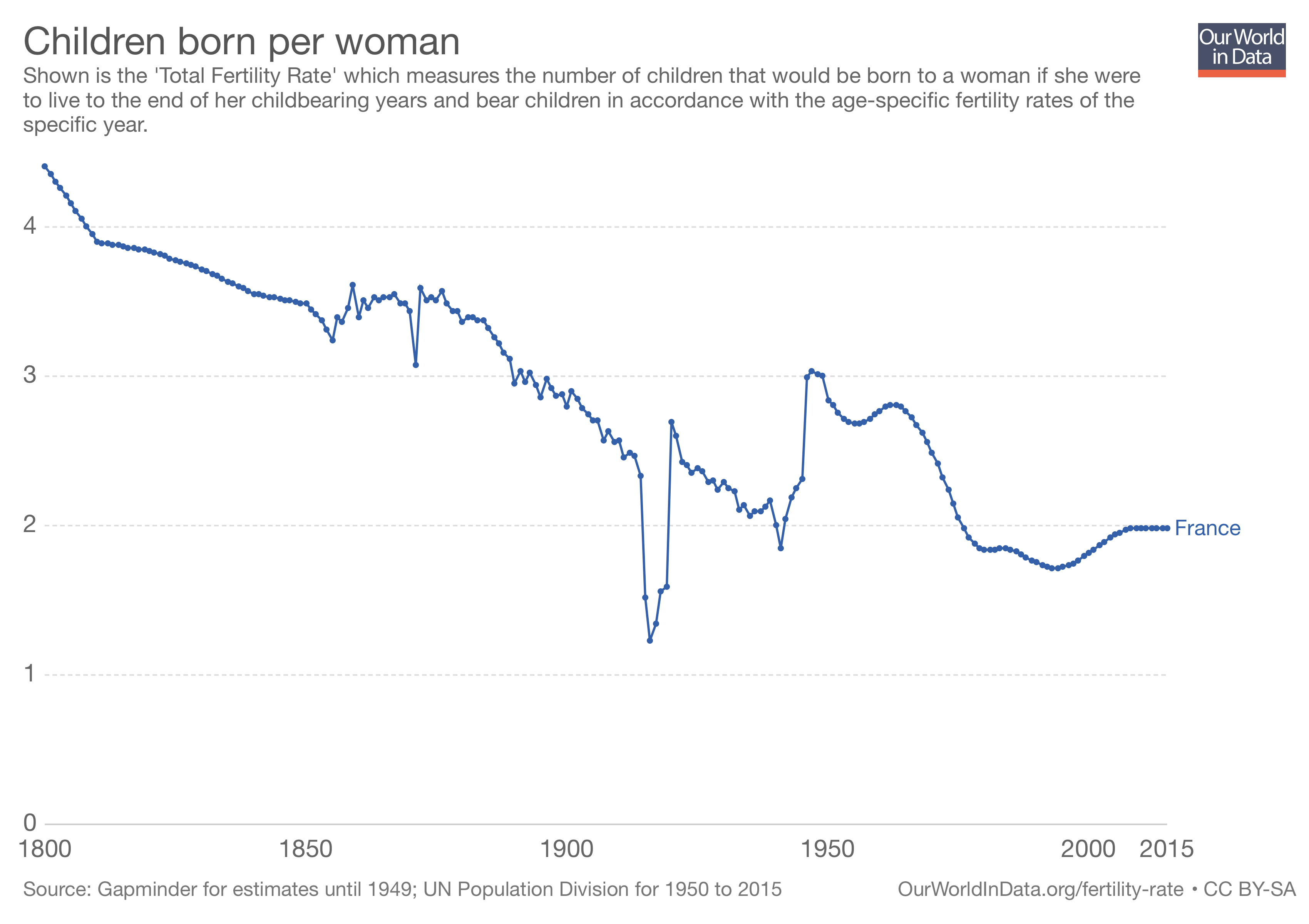 That doesn't look that much like a special case for France during the 1800s but looking at the animated map indicates that this is only relative to other countries and their development at the same time.

However, the impact isn't that big in the really long run:

Now, that is not birth rate but total population, indicating that France was early and managed to display a remarkably smooth fertility transition, unlike the rest of Europe. People plan their family size. Always. That is the case through the ages. The concept of natural fertility is of little relevance to theories of the demographic transition. Inheritance laws may have been a contributing factor. But a small one on the periphery of things to consider at best. That does not mean that "It's the economy, stupid!" would not play a role here. But in much more complex relationships. (Timothy W. Guinnane: "The Historical Fertility Transition: A Guide for Economists", Economic Growth Center Yale University Discussion Paper, 2010).

That is a much more colourful picture than just looking at one single set of laws that are perhaps controlling things.

What are some of the important interactions among the factors shown in Figure 1 that are likely to influence fertility transitions? One of the most important interactions,I believe, is between the preexisting number of surviving children that families can accommodate, the onset of mortality decline, and their prior and subsequent use of controls on family size and composition. In other words, whether surviving children exceed, meet, or fall short of the numbers that families can accommodate or find optimum will determine the types of postnatal controls on offspring couples use and the purpose for which they use these controls, and together these will help to determine fertility. Another important interaction is between the types of postnatal controls in use in the population and external changes that alter the costs of these controls relative to the costs of prenatal controls. As noted earlier, in pretransitional populations, just as much as in those undergoing transitions, the nature of social systems influences the value of (surviving) childrento parents and the extent to which families can accommodate different numbers of surviving children or sons and daughters. In particular, I suggest that the nature of kinship-cum-gendersystems, in interaction with other forms of social organization, such as landlord-tenant, patron-client, or state-citizen relationships (Caldwell 1993; Greenhalgh 1990, 1992; Johansson 1991; Szretzer 1993), strongly influence whether families can accommodate modest numbers or large numbers of surviving children (Davis 1955). Thus, whether postnatal forms of family limitation are used before a fertility transition, the nature of these postnatal controls, and whether they are used primarily to reduce the size of the family, to increase it, or to change its composition will depend on the nature of kinship and gender systems in interaction with other forms of social organization in the society. 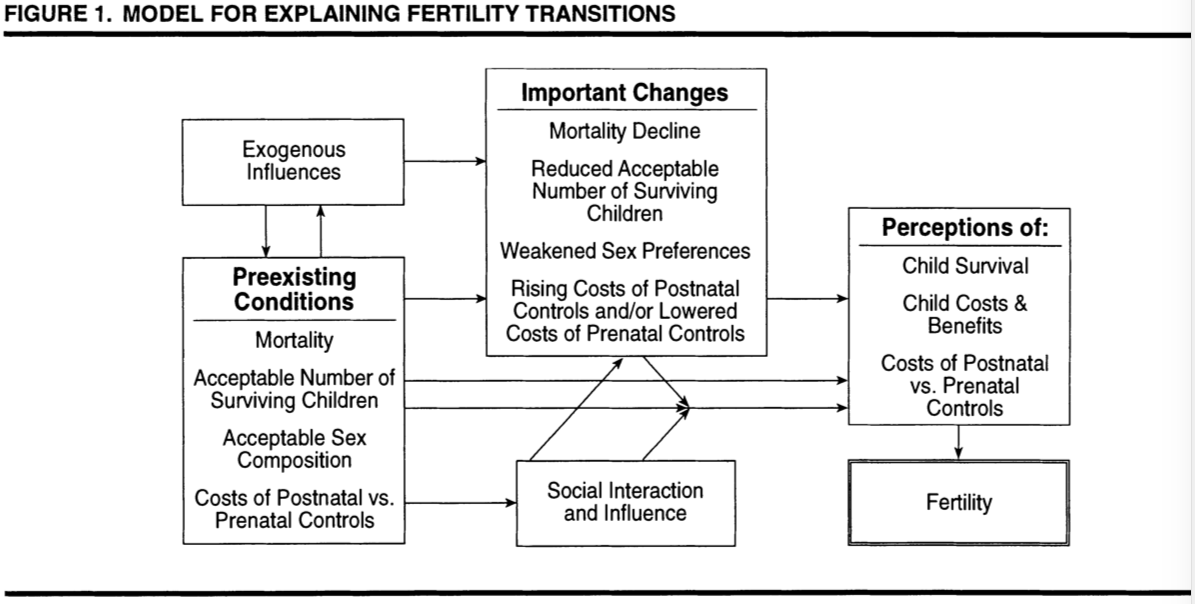 For France in particular there are a number of debates still ongoing that explain why Wikipedia cannot give a definitive source to cite:

The factors which drove the rapid convergence towards low fertility rates across French regions during the 19th century are still debated. There were, of course, changes in economic conditions, e.g., the rise in the demand for human capital which occurred during the second Industrial Revolution, the decline in child mortality or increased life expectancy. However studies on the demographic transition in France (e.g., Weir, 1994, Murphy, 2015) all suggest that such changes were probably not substantial and rapid enough to explain, on their own, the demographic transition.
It is however possible that increased social interactions, which spread information and cultural norms, contributed to the convergence in fertility rates (Gonzalez-Baillon, 2008, Murphy, 2015, Spolaore and Wacziarg, 2014).3 In this respect, two observations are noteworthy. First, it was in the course of the 19th century that France progressively developed a national culture, as reflected by the spread of French at the expense of regional languages (Weber, 1976).4 Second, the French did not migrate to the New World during the 19th century but instead moved within France.5 These two observations suggest that migration may have contributed to cultural harmonization within France, a conjecture which we directly address in this study by focusing on the decline in fertility.[…]

Our results suggest that the transmission of information via migration explained most the convergence of fertility rates across France while socio-economic variables had, at best, a limited impact. In particular, emigrants sent back information to their region of origin regarding the decreasing fertility norms of their region of destination. It is therefore plausible that emigrants sent information to those who stayed behind, but who might have wanted to emigrate in the future. This information regarding social norms about family size could also have been grounded in an economic rationale pertaining to the cost of raising children in urban areas, and specifically in Paris. Our interpretation is consistent with the idea that the lack of external migration might have been crucial in explaining French exceptionalism in Europe. Internal migration was, relative to all migrations, an order of magnitude more important in France than in other European countries. The effect of French cultural unification, especially the emulation of Paris as the focus point of cultural change, was thus not counterbalanced by the potential influence of high-fertility New World destinations on fertility levels, as may have occurred in other European countries. As such, our results are in line with the notion that France progressively became a fully culturally integrated country in the course of the 19th century.

France was developing just like the other industrious nations, improved hygiene, living standards, economic prospects, similar to neighbouring countries. The decline in mortality being the most significant factor. The above analysis however means that one important factor for post-natal control called emigration was largely out of the picture for France, unlike for exporters of human capital like England, Ireland and Germany.

Of course that is not the one factor that explains everything. It is merely one of the most outstanding factors.

The evidence presented here demonstrates that socioeconomic status mattered during the early French fertility decline but cannot, of course, claim to have cracked one of the greatest unsolved puzzles in economic history. The root causes behind the World’s first fertility decline are still poorly understood.
Neil Cummins: "Marital fertility and wealth in transition era France, 1750-1850", SE Working Papers n°2009-16. 2009. halshs-00566843

Apart from the factors already discussed, I'd like to offer one final influence. Most of the time these matters of demography are immensely laden with politics (Carol Blum: "Strength in Numbers: Population, Reproduction, and Power in Eighteenth-Century France", JHU Press, 2002.) and that means powermongering and population control, not only in population size but many other factors as well. The interesting thing is to be found in that both sides of the argument always present a story of decline ("not enough people – we're losing power/die out" vs "we're getting all too many, we cannot feed that many people"), using the exact same numbers to arrive at the desired conclusion.

For a more detailed discussion on the difficulties that the field of demographics has on its own refer to especially chapter 5 "Demography and Anthropology: A Return to the Origins" in: Véronique Petit: "Counting Populations, Understanding Societies. Towards an Interpretative Demography", Springer: Dordrecht, Heidelberg, 2013, p 89–112:

Geoffrey McNicoll has noted that over time, the added value of these surveys will gradually decline because although the same type of knowledge is obtained for a larger number of societies, these surveys provided no input from an explanatory perspective since the same variables and models are used. The result is a growth rather than a refinement of knowledge. Despite the fundamental criticisms levelled against the theory of demographic transition, it has continued to serve as the paradigm of reference for most demographers. From the point of view of the discipline, a dead end has been reached that can only be resolved (according to McNicoll) by developing a micro approach.
To conclude, let us quote two sharp and converging remarks by a French socio-demographer and an American mainstream demographer. In 2004, Louis Roussel wrote: ‘One significant obstacle to the development of the identity of demography is the existence of a kind of entrenchment syndrome which, when faced with the necessity of drawing boundaries with other areas of scientific expertise, involves taking shelter behind a Maginot line designed to limit the risk of interdisciplinary contamination as far as possible’ (Roussel 2004: 206–318). In 1993, Samuel Preston shared the same opinion about American demography: ‘Demography is a small discipline lacking security in academic bureaucracies and always in need of a raison d’être’. In a nutshell, the marginality of anthropological demography in France is the unsurprising consequence of its roots in anthropology and only partly in demography.

Well, from Wikipedia, in the section you linked, although, Citation Needed:

The birth rate in France diminished much earlier than in the rest of Europe in part because inheritance laws dictated distribution of estates whereas in the UK wealth could be passed to the eldest son or child.

For another reason, could it be that France hit a limit on its ability to support its population? It was already the most populous place in Europe by the Middle Ages. Might it just have hit the limit?

Also, how was the census taken? Could that have made the numbers seems strange?

Not the answer you're looking for? Browse other questions tagged 20th-century 19th-century france demography statistics or ask your own question.

16
How popular was Mozart in France before WWII and after it?
1
What was the first regular airline service to pass low over urban areas?
9
Why was immigration from France to the United States lower than from some other countries?
11
Why did the Eastern U.S. population decrease so much during WWII?
35
Why was there a surge in the US incarceration rate during the 1990s?
8
When (and where) did public polling start taking place on topics other than elections?
2
For U.S. history 1800-1830, what was GDP by sector and industry?
5
What was the rate of premarital conceptions in England from 1850 to 1890?
4
What was the extent of France's material support during the American Revolution?