Kabris, the "half-wild Frenchman", in Kamchatka

A Frenchman who had gone native in the Marquesas Islands, Jean Cabri or Kabris, returned to Europe in the early 1800s and became a well-known attraction and swimming teacher. 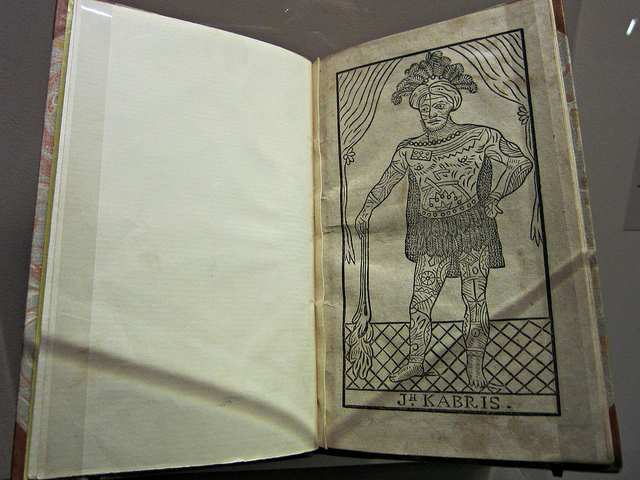 His return voyage involved passing through Kamchatka. I followed a footnote in another work to read in Nozikov's Russian voyages round the world that:

... the half-wild Frenchman, Le Kobrite, who had been brought there from the island of Nukuhiva, left the ship [Nadezhda]. He had taken a great liking to Koshelev, the Governor of Kamchatka, who, in accordance with the Frenchman's request, had taken him into his service.

Nozikov's book, at least in English translation and "produced in complete conformity" with wartime economy standards, includes no bibliography.

Neither P.I. Koselev (serving 1802-1807 at Nizhnekamchatsk) or a stay in Kamchatka are mentioned in Kabris's short autobiography. Most descriptions of his life skip right over this part. Possibly, the reference could have come from one of the several travelogues of the Nadezhda, or Kabris could have claimed it himself in Europe.

Does other evidence illuminate the nature and duration of Kabris's stay in Kamchatka?

Cabri doesn't seem to have been in Kamchatka for more than a few months, from late July / early August 1804. He left Kamchatka, and travelled to St. Petersburg in the company of Count Fyodor Ivanovich Tolstoy, departing in late 1804.

While in Kamchatka, Cabri seems to have been seen as something of a scientific curiosity.

Extracts from two of Captain A.J. Von Krusenstern's letters from Kamchatka were published in The Philosophical Magazine: A Journal of Theoretical, Experimental and Applied Physics, Volume 22. In the second extract (pp 115-123), Von Krusenstern records that the Nadezhda arrived in the harbour of St. Peter and St Paul in Kamchatka on 15 July 1804. The second extract also records that they were still in the harbour on 20 August.

(In those letters, Von Krusenstern also records some interesting details about the voyage, and the events that led to Cabri coming aboard, and travelling with the ship to Kamchatka).

Unfortunately, Von Krusenstern provided rather less detail than one might have hoped for in his 2 volume record of the voyage, Voyage round the world, in the years 1803, 1804, 1805, & 1806, by order of His Imperial Majesty Alexander the First, on board the ships Nadeshda and Neva, under the command of Captain A.J. von Krusenstern.

He simply states that, at some point after the governor arrived at St. Peter and St. Paul on 12 August,

"A trifling change took place in the suite of our ambassador : Count Tolstoy, lieutenant of his Imperial Majesty's guards. Dr. Brinkin, the physician to the embassy, and M. Kurlandzoff, who had been engaged as draftsman to the expedition, quitted the ship, and set out from hence to St. Petersburgh"

"... the wild Frenchman, wiiom we brought with us from Nukahivva, was also left at Kamtschatka."

According to Owen Matthews, in his book Glorious Misadventures: Nikolai Rezanov and the Dream of Russian America, Jean Cabri returned to St Petersburg overland with Count Fyodor Tolstoy.

It seems that Tolstoy was also put ashore in Kamchatka, although in his case it was "for disorderly conduct", in August 1804. He had joined the crew of the First Russian Circumnavigation aboard the Nadezhda, commanded by Ivan Kruzenshtern.

"Also with them was Nikolay Rezanov, an imperial envoy whose mission was to establish diplomatic relations between Japan and Russia. During the trip, however, Kruzenshtern and Rezanov got in a row. Tolstoy was a â€śchevalier of the embassy,â€ť subordinate to Rezanov, but as a Naval Cadet Corps alumni he teamed up with Kruzenshtern, ridiculing the bitter-tempered Rezanov."

Matthews (above) states that the Nadezhda departed Kamchatka en-route for Japan on 22 August 1804.

Now, it seems that there is some uncertainty about some details of Tolstoy's journey from Kamchatka to St. Petersburg. Manaev states that he travelled via Okhotsk, where he arrived in January 1805. However:

"... Tolstoy told his friends that between August 1804 and January 1805 he visited the Aleutian Islands and Russian Alaska (this is why he was nicknamed â€śAmericanâ€ť). Mikhail Filin, Tolstoyâ€™s biographer, recently proved that his American trip was a lie - Tolstoy couldnâ€™t possibly have had the time to cross the ocean and return in just four months."

In any event, Tolstoy arrived back in St Petersburg in August 1805 [Rosamund Bartlett: Tolstoy: A Russian Life, HMH, 2011, p50], having travelled overland from Kamchatka

So, we know that Jean Cabri arrived in Kamchatka on board the Nadezhda on 15 July 1804, and came ashore at some point before 22 August when the Nadezhda departed for Japan.

He left Kamchatka with Tolstoy, and they arrived in Okhotsk in January 1805. This means that they must have departed in late 1804, at most just a few months after they had arrived.

Although he doesn't seem to have been in Kamchatka for very long, it seems that Cabri was something of a scientific curiosity during his stay.

In Literary Culture and the Pacific: Nineteenth-Century Textual Encounters by Vanessa Smith & Vanessa Jane Smith (Cambridge University Press, 1998), the authors have this to say about Cabri:

"Jean Cabri, a beachcomber returned from his adopted home in the Marquesas to Europe by Krusenstern's Russian expedition to the Pacific was initially appreciated as a cultural artefact. He was taken by the Russians to Kamchatka, where he proved an object of scientific curiosity. Initially he represented a text rather than an actor. He had forgotten his native language (French), and his body and face were almost completely scarified. Indelibly inscribed and lacking the language for self-interpretation, he was a figure of indecipherability."

This, presumably, accounts for the governor's interest.

Cabri's death and obituary is recorded in The Gentleman's Magazine, 1822, Volume 92, Part 2; Volume 132, p567. It's worth noting that, at that point, his name was recorded as Joseph Kabris.

10
Is there any overland route to Kamchatka?
21
Six pregnant maidens from Kamchatka
5
Which English ship was in Kamchatka in 1793?
10
Why was the Kamchatka Regiment sent?
4
What was the first printed material owned and kept in Kamchatka?
7
Were the officers assigned to Kamchatka being punished?
4
Which STD did adults & children have in Kamchatka?
6
Was slaughtering cows in Kamchatka prohibited in the 1820s?