What do the knight figures in the Kehlsteinhaus fireplace symbolize?

The Kehlsteinhaus, also known as the Eagle's Nest, is a villa for diplomatic receptions and a mountain retreat for Adolf Hitler built in 1938. There is a marble fireplace in the main room, which was Hitler's birthday gift from Italian dictator Benito Mussolini. The back wall of the fireplace shows two knights and the building completion date. 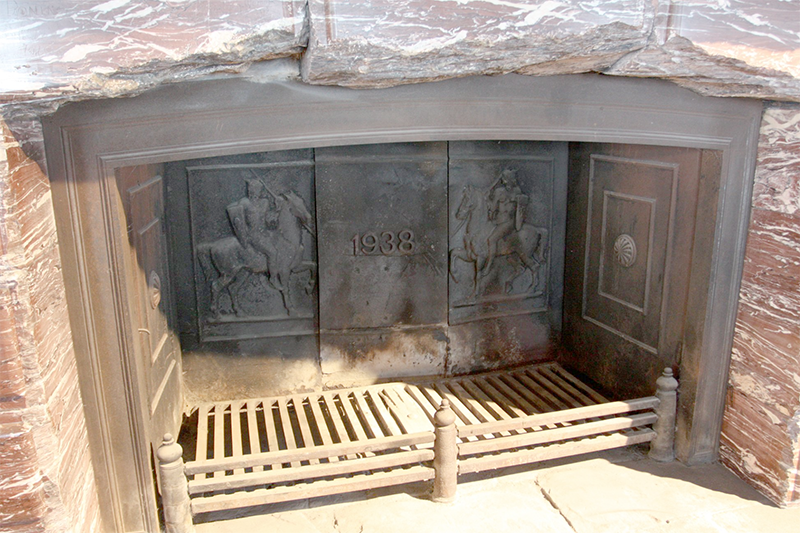 What or who do these two mounted figures symbolize? Is there a story about them?

The kite shield illustrated, although most closely associated with the Normans because of its appearance on the Bayeaux Tapestry, is attested as early as the reign of Otto III from appearance in the Gospels of Otto III. Otto III is the grandson of the Otto I, who is generally regarded as the first Holy Roman Emperor. This is especially true for someone like Hitler who celebrated the Germanic nature of the Empire, as Otto I was the first Saxon Emperor, and ruled a realm not dissimilar to that of the later middle ages and early modern period

This makes the fireplace an allusion to Hitler's First Reich. Although the kite shields are possibly anachronistic by a generation, they are definitely associated with the Saxon Dynasty founded by Otto I.

Although not definitive, the best images I could find on the web strongly suggest that the knight figures are the same image, mirror reversed. If so, they are both representative of Otto I in my opinion.

Not the answer you're looking for? Browse other questions tagged nazi-germany art architecture symbols or ask your own question.

3
What is the original variant of the “Charles V Dominating Fury” statue?
21
What's the meaning of a knight fighting a snail in medieval book illustrations?
8
What is this tool/thing in an Aztec painting?
11
What are some symbols representing peasants/oppressed persons fighting back?
5
What are the red and white sectors of The Tower of Babel (Rotterdam)?
6
What is the meaning of the quadruple symbols combination on a possibly Roman monumental piece?