Was the flag of Iceland originally fimbriated in silver?

The flag of Iceland, shown below, is described blazon as "Azure, a cross gules fimbriated argent", indicating that the fimbriation is silver. Argentum means silver in Latin. 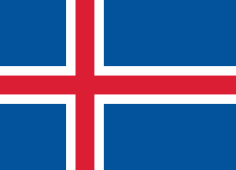 Does this mean that originally the flag was fimbriated in silver, or was it always white?

The art and science of classic European flag design is called "Heraldry". Classic heraldry refers to color as "Tincture". Tinctures are separated into 5 colors:

In classic medieval sculpting artworks depicting heraldry (like a family crest on a wall), the two metals Or and Argent should be depicted with Gold- or Silver plating if possible. If material (or budget) don't permit, then one can resort to yellow or white paint. You can't silver-plate a flag (at least not with the techniques available in the medieval age), so a silver flag would be a white flag.

The Icelandic flag never had any actual silver colour in it and was never meant to contain any silver.

In the quote argent is meant to convey just white. It is used in an outdated and imprecise form of traditional descriptive language.

While it's true that:

The word for white in Latin is "albus", not argentum. Argentum means silver.

In heraldry the proper word for red is not rouge but gueules, which now designates as a French word the mouth of an animal. This is Medieval tradition, not modern linguistics.

The Icelandic flag has always been red, blue and white like snow. White, white alone, always white and nothing but white, the actual colour, not silver:

The civil national flag of Icelanders is blue as the sky with a snow-white cross, and a fiery-red cross inside the white cross. The arms of the cross extend to the edge of the flag, and their combined width is ​2⁄9, but the red cross ​1⁄9 of the combined width of the flag. The blue areas are right angled rectangles, the rectilinear surfaces are parallel and the outer rectilinear surfaces as wide as them, but twice the length. The dimensions between the width and length are 18:25.

The usage of the term argent is here mixing the terminology of vexillology with that of the older and more traditional heraldry. Vexillology is a sub-field of heraldry now, but does not really conform to all those overcome standards there.
Insisting to all what is white and meant to be white as argent?
Can be done, is not forbidden, but a bit outdated and pretentious when applied to flags instead of coat of arms –– and leads to confusion, as evidenced here.

Unlike the German flag that really has to be described as containing (ideally) gold the Icelandic one is properly just white like snow. (Compare the German flag again with that of Belgium to see the distinction).

As the above Wikipedia page states: Vexillology rarely distinguishes between gold and yellow; in heraldry, they are both Or. For the German flag, such a distinction is made: the color used in the flag is gold, not yellow. And for the Icelandic flag it is white.

In heraldry the tincture white is commonly described as argent

Metals
The metals are or and argent, representing gold and silver, respectively, although in practice they are often depicted as yellow and white.

Or (Ger. Gelb, Gold, or golden) –– derives its name from the Latin aurum, "gold". It may be depicted using either yellow or metallic gold, at the artist's discretion; "yellow" has no separate existence in heraldry, and is never used to represent any tincture other than or.

Argent (Ger. Weiß, Weiss, Silber, or silbern) –– is similarly derived from the Latin argentum, "silver". Although sometimes depicted as metallic silver or faint grey, it is more often represented by white, in part because of the tendency for silver paint to oxidize and darken over time, and in part because of the pleasing effect of white against a contrasting colour. Notwithstanding the widespread use of white for argent, some heraldic authorities have suggested the existence of white as a distinct heraldic colour.

So, in classical heraldic terms argent really always means silver, it's just that because of cost or material availability or some other restrictions they came to use white as an almost equivalent substitute. Thus paving the way for the synonymous quality of silver and white in heraldry. In modern heraldry white became also arguably a distinct colour.

With regard to the other metal, silver, or, as it is always termed, "argent", the same variation is found in the usage of silver and white in representing argent that we find in yellow and gold, though we find that the use of the actual metal (silver) in emblazonment does not occur to anything like the same extent as does the use of gold. Probably this is due to the practical difficulty that no one has yet discovered a silver medium which does not lose its colour. The use of aluminium was thought to have solved the difficulty, but even this loses its brilliancy, and probably its usage wall never be universally adopted. This is a pity, for the use of gold in emblazonments gives a brilliancy in effect to a collection of coat-armour which it is a pity cannot be extended by an equivalent usage of silver. The use of silver upon the patents at the College of Arms has been discontinued some centuries, though aluminium is still in use in Lyon Office. Argent is therefore usually represented either by leaving the surface untouched, or by the use of Chinese white. I believe I am the first heraldic writer to assert the existence of the heraldic colour of white in addition to the heraldic argent.
A. C. Fox-Davies: "A Complete Guide to Heraldry", TC & AC Black: London, 1909, p 70.

In modern flag design however there is now a clear distinction to observe between calling a colour silver or white, yellow or gold. As evidenced in the text of the Icelandic law for the flag: the Icelandic Flag is a modern design (it was officially described in Law No. 34, set out on 17 June 1944): Therefore, for Iceland this was always not the metallic silver of a knight in shining armour on his coat of arms, but the blinding white of the snow on that island.

Not the answer you're looking for? Browse other questions tagged heraldry iceland flags or ask your own question.

14
Lion in European monarchies' coats of arms
14
White on Polish coat of arms
4
What is the symbolism behind the Sauser family crest from Sigriswil, Switzerland?
13
Did Hungarian Army ever use crescent banners?
7
Which regions/dynasties do the flags in this Fresco about Byzantine-Persian war represent?
10
Can anyone explain why the Scottish flag on this map from 1504 has a red cross on a white background?
6
What was the Hospitaller gonfalon like in the 12th and 13th centuries?
8
Is (or was) there a version of the Maltese Cross with the right arrowhead missing? Does it have a name?
4
Are the Swiss flag and the flag/coat of arms of Piedmont related?