Who were the "international statesmen" Hitler referenced in his last will as having started the war?

Having reread Hitler's last will, I was astonished by the complete lack of self-awareness or perhaps some very early onset of Alzheimer's, for example, when he writes that

It is untrue that I or anyone else in Germany wanted the war in 1939. It was desired and instigated exclusively by those international statesmen who were either of Jewish descent or worked for Jewish interests. I have made too many offers for the control and limitation of armaments, which posterity will not for all time be able to disregard for the responsibility for the outbreak of this war to be laid on me. I have further never wished that after the first fatal world war a second against England, or even against America, should break out. Centuries will pass away, but out of the ruins of our towns and monuments the hatred against those finally responsible whom we have to thank for everything, International Jewry and its helpers, will grow.

or how about this paragraph

Three days before the outbreak of the German-Polish war I again proposed to the British ambassador in Berlin a solution to the German-Polish problem - similar to that in the case of the Saar district, under international control. This offer also cannot be denied. It was only rejected because the leading circles in English politics wanted the war, partly on account of the business hoped for and partly under influence of propaganda organized by International Jewry.

Not a word about the secret protocol of the Molotov-Ribbentrop pact or how did war with USA start, etc.

But my question here is about the 2nd sentence, specifically do we know who were in Hitler's mind the "international statesmen who were either of Jewish descent or worked for Jewish interests", did he ever name and list them explicitly somewhere and if yes did the list change over the years?

In my opinion, he was writing to an audience of future sympathizers, whom he would want to continue his actions, i.e. the extermination of Jews and subjugation of other people by the Aryans. By that time, they were losing the war and he knew it, despite his grasping at straws about a last minute breakup of the Allies a la Frederick the Great.

Taking the Holocaust, proceeding as fast as possible with it near the end, rather than trying to cover it up, disassociating themselves from their evil and blaming someone else, only really makes sense if the Nazis thought they were laying the groundwork for another Reich. Ditto the Werwolf project, it was about rebirth.

By that logic, playing the victim card, continuing to spread lies and justifying WW2 as forced upon him, rather than caused by him (albeit maybe inadvertently when he thought Britain and France would back down one more time), makes complete sense. He wants others to pick up on the supposed grievances and continue the fight.

He's still doing propaganda, not trying to be honest with himself and others. Having an unnamed cabal of enemies of Germany just lays the groundwork for someone to manipulate German opinion, just as he blamed the collapse of Germany in 1918 on Bolsheviks and Jews in order to gain power. "They" really don't need to be named and it's even more powerful if they're not, because a list would lose power once its members were dead or out of power. That's what still makes the Protocols work, 120 years later.

Besides, in contemporary conspiracy theorists, how often are people named? True, George Soros often gets mentioned, but how useful is that, really? Letting your audience fill in the blanks for themselves works just fine and avoids having to defend your claims when facts would get in the way with named individuals. 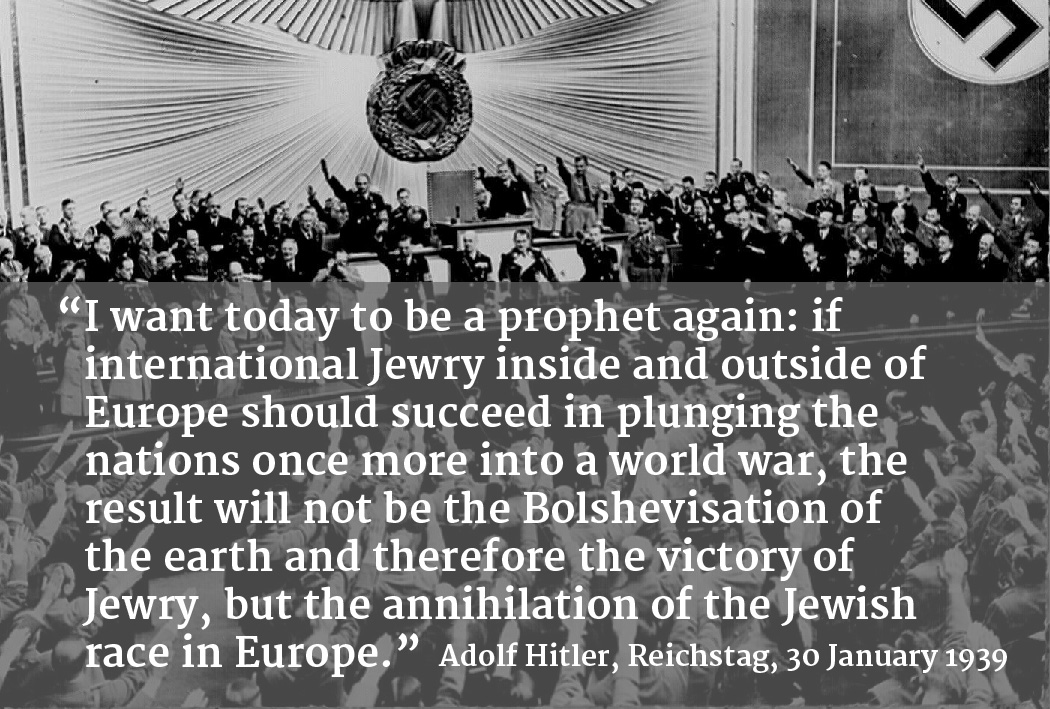 As to which "international statesmen" he had in mind, from an American Heritage article on The Transatlantic Duel: Hitler Vs. Roosevelt we find this:

From 1939 to the end of the war, Hitler saw the situation of the Western powers thus: behind Churchill was Roosevelt; and behind Roosevelt, the Jews. Because of this, Hitler’s speech on January 30, 1939, is of considerable significance, although it was overlooked at the time by a world that had grown accustomed to his fanatical rhetoric. “If the international Jewish financiers inside and outside Europe should again succeed in plunging the nations into a world war, the result…will be the annihilation of the Jewish race throughout Europe.” In other words, his enemies might bring about a world war. They are being incited by Jews. About Jews in America he could do nothing. But if there was a war, it would be “no laughing matter” (these were his words) for the Jews in Europe. [emphasis added]

Roosevelt and Churchill were likely paramount among the international statesmen he was blaming in his last will and testament.

Not the answer you're looking for? Browse other questions tagged world-war-two hitler nazism or ask your own question.

6
Who is the person sitting to the left of corporal Hitler?
25
What were the Allies' plans if they caught Hitler alive?
22
What effect did the Attack on Mers-el-Kébir have on Great Britain's international relations during WW2?
14
Did Hitler really keep the blueprints of the current Nebraska state Capitol building in the drawer of his desk?
7
Did Hitler brag about or downplay his war experiences in WW I in appealing to 1932 voters?
15
Who are the people walking with Hitler?
17
How did Hitler imagine his succession? (for the case nazis would win the war)
108
Did Adolf Hitler ever address the fact that his own appearance was almost an exact opposite of what he considered the ideal Aryan appearance?