Are the Sabean people of Cushitic or Ethiopian origin?

The Sabeans are widely acknowledged to be of Semitic or south Arabian origin. Historical sources like Josephus Flavius and sections of the Bible seem to create conflicts about their origin. 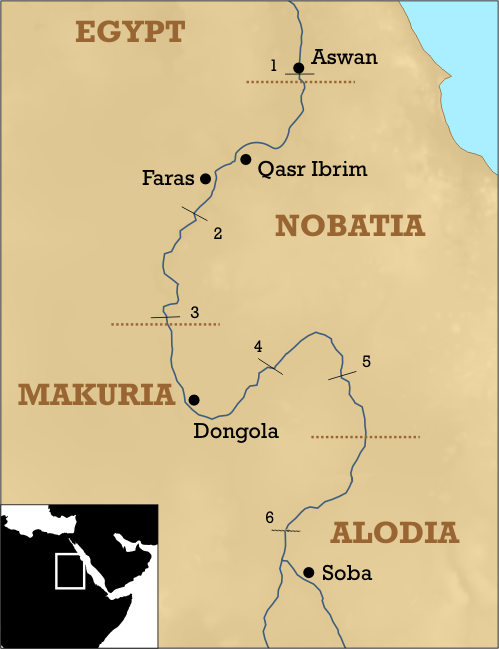 There is a city bearing a similar name in modern Sudan.

Soba is the former capital of the medieval Nubian kingdom of Alodia . E. A. Wallis Budge identified it with a group of ruins on the Blue Nile, where there are remains of a Meroitic temple that had been converted into a Christian church. This would place Soba in the modern-day Sudanese state of Al Jazirah. Ibn Selim el-Aswani described the city as large and wealthy Wikipedia

ANTIQUITIES OF THE JEWS by Josephus Flavius (Book II chapter 10:2)

The Ethiopians were in danger of being reduced to slavery, and all sorts of destruction; and at length they retired to Saba, which was a royal city of Ethiopia, which Cambyses afterwards named Mero, after the name of his own sister. The place was to be besieged with very great difficulty, since it was both encompassed by the Nile quite round... for the city was situate in a retired place, and was inhabited after the manner of an island, being encompassed with a strong wall, and having the rivers to guard them from their enemies, and having great ramparts between the wall and the rivers, insomuch, that when the waters come with the greatest violence, it can never be drowned; which ramparts make it next to impossible for even such as are gotten over the rivers to take the city.

Below is an excerpt of Josephus' writings about the Queen of Sheba.

The Works of Flavius Josephus, Antiquities of the Jews Book VIII – CHAPTER 6

” … There was then a woman queen of Egypt and Ethiopia; she was inquisitive into philosophy, and one that on other accounts also was to be admired. When this queen heard of the virtue and prudence of Solomon, she had a great mind to see him...

So when this queen of Ethiopia had obtained what we have already given an account of, and had again communicated to the king what she brought with her, she returned to her own kingdom. …”

For clarity please note that I am the one linking Sheba, Soba and Saba using all of these historical sources.

Genesis 10:6-7 The sons of Ham were Cush, Mizraim, Put, and Canaan. The sons of Cush were Seba, Havilah, Sabtah, Raamah, and Sabtechah; and the sons of Raamah were Sheba and Dedan.

When all these separate bits of information are put together, it all becomes very intriguing. I need to make sense of all these historical and contemporary connections surrounding Soba, Saba, Sheba and the Sabean people.

Are the Sabean people of Ethiopian origin?

No. The evidence suggests that they originated in the region now known as South Arabia.

Did the Sabean people truly exist?

We have the remains of their cities, including at Ma'rib in modern Yemen, so we can be pretty sure that the Sabean people really did exist.

Where are their descendants today?

After perhaps 2500 years, does that question actually have any meaning? Given 100 generations or so for their descendants to disperse, the Sabean people probably have descendants spread across the globe.

Why does modern archaeology attribute a Semitic, Arabian and Yemeni origin to these people?

Because that is what the evidence tells us. Specifically, the earliest examples of inscriptions in the Sabaean language (which belongs belongs to the South Arabian subgroup of the Semitic branch of the Afro-Asiatic language family) have been found on archaeological sites in Yemen, in South Arabia.

Is there any evidence for their Ethiopian origin, as Josephus Flavius suggests?

We can be reasonably certain that the Sabaean language was an Old South Arabian language. It belongs to the South Arabian subgroup of the Semitic branch of the Afro-Asiatic language family.

We have a large number of inscriptions in the Sabaean language from the Kingdom of Saba, including many from the capital of the ancient kingdom of Saba, Ma'rib in modern Yemen, so we can be pretty sure that the Sabean people did exist.

Josephus was simply repeating the Biblical tradition. Meroë certainly existed, and had its origins in the Kingdom of Kush (although, perhaps unsurprisingly, Josephus seems to have been unaware of this). The Queen of Sheba is more problematic. As the Wikipedia page observes:

"Her existence is disputed and can't be confirmed by historians."

In their 2007 book, David and Solomon: In Search of the Bible's Sacred Kings and the Roots of the Western Tradition, Israel Finkelstein and Neil Asher Silberman go even further and state that:

"The biblical thousand-and-one-nights story of Solomon and Sheba is thus an anachronistic seventh-century set piece meant to legitimize the participation of Judah in the lucrative Arabian trade."

In any event, we have a pretty good chronology of Egyptian kings right from the Third Intermediate Period to the Greco-Roman period - including for the Kushite '25th Dynasty', and we certainly have no evidence to support Josephus' claim of:

... a woman queen of Egypt and Ethiopia;

There is no evidence for a female ruler of Egypt at any point in that period.

The Kingdom of 'Sheba'

However, the possibility of a Kingdom of Sheba cannot be discounted, and many seem happy to equate it with the Kingdom of Saba.

Now, a great many inscriptions in the Sabaean language have also found in Ethiopia, such as these found at Yeha: 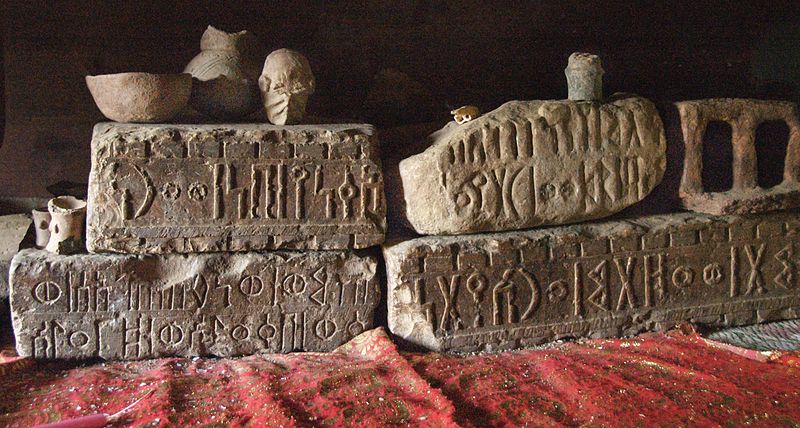 This has led to speculation that the Kingdom of Sheba may have spanned the Red Sea, encompassing parts of modern Ethiopia and modern Yemen. Of course, an alternative possibility is simply that the Sabaean language was adopted by the Ethiopian kingdoms.

However, it should be noted that the Ethiopian inscriptions all date from contexts much later than the earliest inscriptions from Yemen. Thus, the source of the Sabaean language, and so also -presumably - the Sabaean people, definitely seems to be Southern Arabia.

A few things that I think need to be cleared up here.

First: When the ancients said "Ethiopia", they generally meant the territory directly south of Egypt, what we today call Sudan. They were not talking about the territory we call "Ethiopia" today. That usage didn't start until the 4th century AD, well after the entire Bible was written.

Second, there is no real kinship between modern and ancient societies, other than cultural. The best way to track that is language. So if you want to know who are the descendants of an ancient people, the only real meaningful way to do that (in less than 5-volume novel form) is to find what language they spoke, then go talk to the linguists.

In the case of the Sabeans, their language went extinct with no successors in favor of Arabic (which is fairly closely related) around the 6th Century AD. The closest living language is Razihi, which is spoken by about 60,000 people in northwest Yemen. Razhi is the sole survivor of the South Arabian languages. It is sort of a cousin language, while Arabic is more like a third or fourth cousin.

Here's a map showing the historical distribution of the Semitic languages. It shows Sabean and some of its close cousins as dead (with little x's through them) languages in Yemen. If Razihi was on there, it would be a non-xed light blue dot quite near Minean. 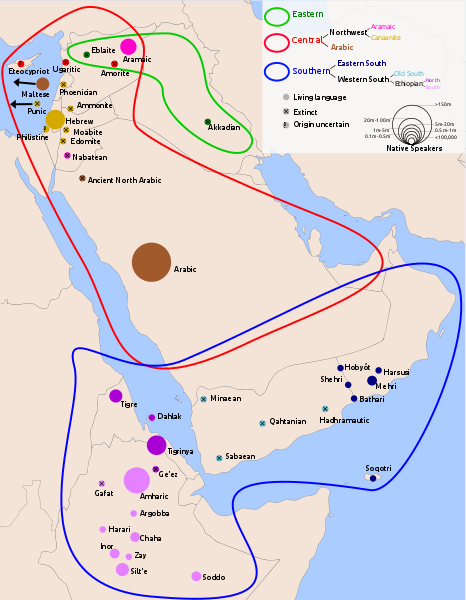 I'm a Soba, a people directly related either to king David or the Levites, My ancestors then were known as Abasuba(Throwers like king David sling) or Makuria(Feed/farmers) or Kuraiza(Feeders) from Jerusalem/Palestine(Suba/Tsuba city) renown for pottery, earthware, spices,deviners, brew making, rain makers and different stuff. First our ancesters fled west to AKsumah-Burahida-Khayaba-Saudi Arabia then stayed in Medina until Prophet Mohammed happened and exiled them to Egypt to a place called Serra through Kurru to Senna(which means Step/Temporary) and passed through various places to reach Uganda what is today Western-Kenya, and throughout our ancestors didn't change their names! We are still AbaSuba,Kuria,Avarimi,Sweta or Maragoli's.

All ancient Jewish evidence in Ethiopia point directly to the Abasuba and many others scattered through out Africa. Since Ethiopians claim they are a descendant of Menelik the son of Solomon and not DIRECTLY related to any of the tribes, even their own city name "GONDAR" is Maragolis ancestral name and was a priest clan that is in Kenya today, they also named Aksumah, and Aksum to AKISUMU where they lived as farmers and Barter trade and at times they used MASANA/MASENO/MUSENO which in Hebrew means "angered".

I know most people won't believe that the original Jews were Black, but it's real and very true, the last ever known relative of king David in Egypt during our exile was called "Shikanda" same name we used to this day. You can Google Shikanda! Same root name that became "Uganda" or Ganda people, also there were another Jewsish tribe called Qaysii which if you replace Arabic "Q" with Swahili "K" is Kisii.

They all prove my ancestors passed through those places to Uganda which was then coalesced into British "East African protectorate" then our side chopped off from Eastern Uganda into Western Kenya so we can be their farm-laborer's!

We were exiled as five clans and 8 subtribes; Meru, Maragols, Kuria, Gisii and Muranga, all this were known as AbaSuba or Tsoba people of Makuria. Our ancestors built THIMLICH OHINGA ruins that are same as ZIMBABWE STONES, we are also associated with Bull sacrifices on several hills found in Uganda and Nubi Mountains in Sudan. 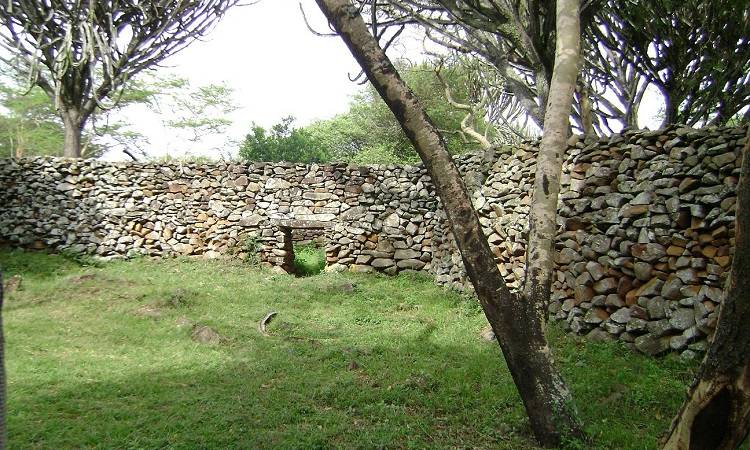 Not the answer you're looking for? Browse other questions tagged ancient-history identification ethnicity historical-accuracy ethiopia or ask your own question.

4
Are the Xibe people the same as the Manchu?
38
What is the origin of the stereotype that Polish people lack intelligence?
11
Did any Ethiopian leaders help the Italians?
2
Are Western European countries more ethnically heterogenous than 100 years ago?
3
Are these Houthi Rebels in Yemen the same people who ran the Mutawakkilite Kingdom of Yemen?
14
Who are the people walking with Hitler?
12
Does modern scholarship accept an Ethiopian or Nubian origin for Egyptian hieroglyphs?
4
On the Ezana Stone, who are the black and red people that the Ethiopian king was referring to?