Why is Franz Conrad von Hötzendorf often refered to by his given name "Conrad"?

I am reading various books and material about the Great War, and in the vast majority of cases, important figures are always referred to by their family names. I.e. Clemenceau, Pointcarré, von Hindenburg, Ludendorff, von Mackensen, etc… Their given names could be added, but they're optional. Also you would never call anyone by their given name only. Nobody could talk about general "Paul" and understand you're talking about von Hindenburg.

What I don't understand is why the Austrian general, Franz Conrad von Hötzendorf is an exception. I can't list where exactly, but I saw him being referred to as "Conrad" at many different places, when he should normally have been referenced to as "von Hötzendorf".

The only other cases of people being referenced by their given names would be outside the western world, such as the Ottoman Empire where family names didn't exist.

"Conrad" is not a given name. "Conrad" is his first surname. Franz is his given name, along with Xaver Josef.

The field marshal, with full name Franz Xaver Josef (since 1910 baron, 1918/19 up to the nobility abolishment count) Conrad von Hötzendorf, was already mentioned during his lifetime as "Conrad von Hötzendorf" or mostly only as "Conrad", which gave the impression that this was his first name. Therefore the following press release appeared in 1914:

We are asked by esteemed parties to draw attention to the fact that the surname of the chief of our general staff is "Conrad", that G. d. I. v. I. Freiherr v. Conrad always signed only "Conrad" and never called himself with his predicate of nobility.

In the Vienna Address Book 1921/22 he was listed as Franz Conrad (with a list of awards received by him, among them two honorary doctorates).

In full the Austrians with their knack for titles would have addressed him at first as "Edler Conrad von Hötzendorf" – indeed not using any given names – and then of course inserting his military rank when he joined the army and then adjusting both according to his rise through the ranks as needed.

His grandfather and his father were already named Edler (title) Conrad von Hötzendorf, as the aristocratic title was inheritable from 1815 onward. Conrad himself was "promoted" in nobility in 1910 to Freiherr (~baron) and then in 1918 to Graf (~count), before being reduced to Franz Conrad in 1919.

Creating a new name for a newly noble in this way was actually the usual procedure for Briefadel and Schwertadel:

In Austria until 1918 it was customary to supplement the name of the new aristocrat with the name of his newly acquired seat of nobility or a new building named after him (e.g. Sigmund Gerstl zu Gerstburg) or – if he did not have one – with a (pseudo-) place name (e.g. "Hofmann von Hofmannsthal"), as is still customary in Great Britain for non-heritable elevations to a lordship today.

Being in the military, he opted for the laconic shortform, just "Conrad", like on this postcard from 1916: 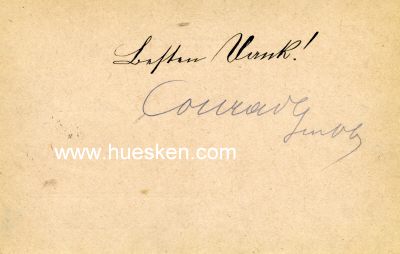 Or when handing out autographs to his fans: 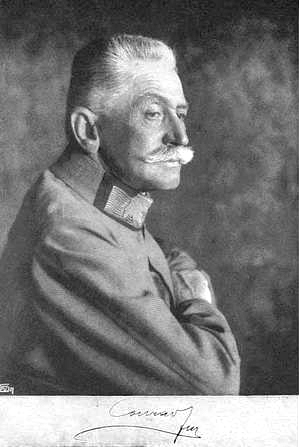 The FM means field marshal. Something he apparently seemed to enjoy quite much. Technically, after the abolishment of the Austrian nobility he was only stripped of the title Graf and the von, making him "Franz Xaver Josef Conrad-Hötzendorf". But he wanted to be listed as just Franz Conrad Field marshal in the phone book:

"Conrad" was his actual surname. "von Hötzendorf" was the nobilary particle his grandfather assumed when he became ennobled, but it was in fact derived from a maternal line (and thus was technically not his patronym, but just his title). That was likely a large part of the reason.

Further complicating matters, he didn't have nobilary particle for the last 6 years of his life. Austria abolished all nobility in 1919, and at that point his legal name (according to today's Wikipedia page) became Franz Conrad-Hötzendorf.

Not the answer you're looking for? Browse other questions tagged world-war-one names austria-hungary given-name or ask your own question.

5
Umar ibn Khattab and Omar as a Western given name
14
When did people stop translating their names when moving from one country to another?
9
Why did Constantius Chlorus decide to become a Flavius?
2
What is known about the origins of the "western given-name-first-surname-last system"?
13
Why is the name "Tecumseh" used for US Navy ships?
11
Why have "classical" given names (seemingly) had greater persistence in American black culture?
28
Why did Peter the Great name Saint Petersburg, Russia with a foreign styled name?
2
Did Martin Luther King, Sr. change his name as an allusion to the Semitic root M-L-K?