Was Erich Ludendorff any form of nobility?

Erich Ludendorff was the most powerful German general at the end of the First World War, achieving practically dictator status from 1916 on. 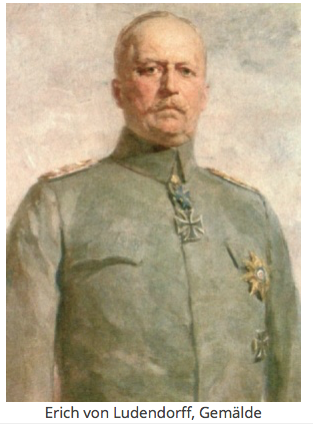 "Expected" here as most of the military officers were indeed members of the aristocracy and carrying a nobiliary particle in their names like the most frequent von or zu etc. His nominally senior partner in OHL leadership Paul von Hindenburg being just the next best example.

Ludendorff never had that von as part of his name. But he was born right into a family that had vast connections into the nobility. Quite a few members were indeed nobility.

Ludendorff was born on 9 April 1865 in Kruszewnia near Posen, Province of Posen, Kingdom of Prussia (now Poznań County, Poland), the third of six children of August Wilhelm Ludendorff (1833–1905). His father was descended from Pomeranian merchants who had achieved the prestigious status of Junker.
Erich's mother, Klara Jeanette Henriette von Tempelhoff (1840–1914), was the daughter of the noble but impoverished Friedrich August Napoleon von Tempelhoff (1804–1868) and his wife Jeannette Wilhelmine von Dziembowska (1816–1854), who came from a Germanized Polish landed family on the side of her father Stephan von Dziembowski (1779–1859). Through Dziembowski's wife Johanna Wilhelmine von Unruh (1793–1862), Erich was a remote descendant of the Counts of Dönhoff, the Dukes of Duchy of Liegnitz and Duchy of Brieg and the Marquesses and Electors of Brandenburg.

He later even married Mathilde von Kemnitz and while the above excerpt mainly lists his maternal lines of nobility, his merchant father also had ties going back to a king of Sweden.

That should make him a (distant?) member or at least descendent of the houses of Vasa and Jagiello.

In a forum someone claims to be a family member and shares the detail that Kaiser Wilhelm II wanted to ennoble Ludendorff, invited him to an audience to discuss the proceedings, but Ludendorff is said to have declined the offer. (War Ludendorff adelig?)

Erich Ludendorff was born to be a soldier: Both his father and maternal grandfather had been officers in the Prussian cavalry. But Erich Ludendorff was not born to be a general. In Prussia (the dominant state in the cluster of Germanic states that would unify into the nation of Germany in 1871) generals came from the nobility. A person of noble birth was marked by the designation "von" before his last name. Ludendorff, born on April 9, 1865, was a commoner, raised in a struggling family that lived in the province of Posen. To reach the top of the German armed forces, he would have to work unrelentingly—and that is what he did.

This is confusing. Now, the von is not strictly necessary for being nobility, just incredibly "common" in those circles (excuse the pun).

Was he not nobility from birth? If not: why not, given the genealogy? Did he have the "title" of Junker, designating a very low rank within the nobility?

There seems to be three different claims as to why Ludendorff should be considered noble in the question:

The first of these is relatively straightforward. Eric XIV had only two legitimate children that reached maturity: Gustav and Sigrid. Gustav never had issue of his own. Nobility in Sweden has only ever been inherited through agnatic lines. Eric had also two illegitimate but recognized children who survived childhood, Virginia and Constantia. Again, being female, they would not themselves have conferred nobility on their descendants (even though they did marry noblemen). Thus, Eric's branch of the family of Vasa is long closed.

(A side note on Eric's genealogy: he was indeed of the house of Vasa, but his only known link to the Lithuanian-Polish house of Jagiello was through the marriage of his half-brother, John III. However, his mother was Catherine of Saxe-Lauenburg, who came from long line of German nobility.)

As for nobles closer to Ludendorff in his family tree, since they all appear to be on his mother's side, they were largely irrelevant; at best, they would be a plus if he was ever himself considered for ennoblement.

Now, for the question about "Junkers". While the word is commonly associated with Prussian, landowning, conservative noblemen, it was in fact not a noble title of its own. At most, it was a courteous title used for untitled nobility. By Ludendorff's time, it had also become attached to the landowning, conservative, Prussian noblemen, who controlled the Prussian state, but it was a socio-political denomination, not a matter of blood status. Ludendorff, or his father, could possibly be associated with them politically, but this would not make them members of the Junker "class".

So, no, Ludendorff was not a noble by birth, exactly as The Encyclopaedia says. To be that, his father would have had to be noble, not just his mother. As he never was ennobled during his lifetime, he was, and remained, a commoner.

On the descendants of Eric XIV, see Sveriges historia 1530-1600. Most encyclopaedias seem to be somewhat vague on what "Junker" meant, I found Nordisk Familjebok most useful; Encyclopaedia Britannica is somewhat less clear, focusing only on the Prussian usage.

Yes, because Military Order of Max Joseph was awarded to him

Ludendorff was recipient of Military Order of Max Joseph (Militär-Max-Joseph-Orden). This is Bavarian award and order, and he only got lowest class (Knight's Cross - Ritterkreuz). Still, any recipient of the award could add to his family name title "Ritter von". For Ludendorff it would be Erich Ritter von Ludendorff.

EDIT: For those doubting Ludendorff was Bavarian subject, he fled to Bavaria, participated in famous Beer_Hall_Putsch with Hitler, and even participated in Bavarian elections with his party and National Socialists .

It was more likely that he refused superfluous title as he was already famous, just like he refused title of Field-Marshal

Not the answer you're looking for? Browse other questions tagged imperial-germany nobility titles or ask your own question.

6
Of which countries was Ludwig von Mises a citizen?
6
What was the order of precedence for ancient China nobility ranks?
8
Jean III de Grailly, captal de Buch's strange title
4
Why was the Titles of Nobility Amendment proposed?
3
How did Hindenburg and Ludendorff lose WWI?
1
How formalised were the various tiers of Russian nobility during the regency of Sophia Alekseyevna?
12
When was the last promotion in the British Peerage?
5
Were there attempts to rename the French language Prussian order Pour le Mérite, why was it never Germanised?
9
How aware was Europe nobility of the danger of consanguinity?