How did historical peoples deal with choking?

These days, the use of the Heimlich Maneuver to deal with choking is so well-known that one might be surprised to learn that it was not invented until the 1970s, so this seemingly simple treatment is as much a product of the modern age as the home computer!

How did people deal with choking without the aid of modern knowledge of medicine and anatomy? For example, if I were in the Middle Ages, dining with my friend, and I started to choke on my food, what would he try in order to save my life?

Dealing with choking would have depended in part on what the obstruction was, where one was and who one was with. As even the surgical procedure tracheotomy can be traced back to ancient Egypt, it's implausible that people in ancient times had not also figured out simpler procedures such as thumping the afflicted person on the back, drinking water and attempting to remove the obstruction by using the fingers.

There were surgical instruments for extracting fish bones from the throat, and evidence that people endured it and survived, or simply died. Incantations, spells and prayers were also used in both ancient and medieval times, not to mention a variety of other methods such as putting bread in the ears.

In addition to tracheotomy, A Companion to Ancient Egypt notes that in the absence of "a sanctioned doctor or priest", for someone choking on a fish bone (for example),

At least two spells have survived that provide the remedy that included reciting a short religious invocation and swallowing a piece of cake to force the bone down the throat.

In ancient Greece, Hippocrates cautioned against tracheotomy, fearing that the carotid artery would be damaged. Instead, he recommended tracheal intubation. Alexander the Great, though, apparently disagreed:

Homerus of Byzantium documented the story of Alexander the Great performing a tracheotomy with his dagger point to save one of his troops from asphyxiation. The soldier was said to be choking, on what we are uncertain, and the long-term outcome is also unsure.

Homeric incantations may also have been used by the Greeks as they were by the Romans (the origins of this practice are obscure), especially during the first four centuries AD.

Galen was said to have experimented with Homeric incantations himself, and to have found them effective in the treatment of a scorpion sting and for dislodging bones stuck in the throat.

a Roman-era recipe recommends that, when someone swallows a fish or bird bone, we should say "Come out in an upward or downward direction!"

Such commands were also used in Christian times, with reference to Lazarus and Jonah (of whale fame).

When a fish-bone happens to stick in the throat, it will go down immediately, if the person plunges his feet into cold water; but where the accident has happened with any other kind of bone, the proper remedy is to apply to the head some fragments of bones taken from the same dish. In cases where bread has stuck in the throat, the best plan is to take some of the same bread, and insert it in both ears.

He also mentions mint as a preventive:

It has the effect of preventing milk from turning sour, or curdling and thickening; hence it is that it is so generally put into milk used for drinking, to prevent any danger of persons being choked by it in a curdled state. It is administered also for this purpose in water or honied wine.

Paul of Aegina (circa 625 to 690), a Byzantine physician, also deals with fish bones and 'other objects' getting stuck in the throat, mentioning removal with forceps (if the object can be seen) or inducing vomiting by sticking a finger or feather in the throat (if the object is deeper).

Bones stuck in the throat were obviously quite common as there was even a medieval patron saint, Saint Blaise, to pray to or to be invoked. This dates back to ancient times and is mentioned in The Book of Blessings (1625); Saint Blaise supposedly cured a boy with a bone stuck in his throat, though how he did it is unclear.

Gregory of Tours (circa 538 to 593 or 594) relates how he had a fish bone stuck in his throat for three days; neither coughing nor hawking (clearing the throat noisily). He attributes its eventual removal to a miracle, but adds

One thing only I know, that I so quickly perceived that I was cured that I thought that some one had put in his hand and pulled out the bone that hurt my throat.

Thus, we have evidence at least of the idea of removing a blockage using the hand.

A more scientific method was using surgical instruments to extract the offending object. The Arabic physician Al-Zahrawi (aka Abulcasis, 936 - 1013) was the first to

use lead for making some of the instruments. Since lead was soft, it was easy to curve and bend an instrument made out of it, during surgical operation. Probes and hooks, therefore, were also especially made of lead for the purpose of extracting fishbone from the throat. 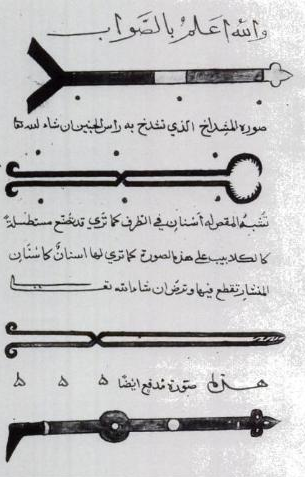 Below is an engraving from 1600-01. Mortality on this procedure was high, though. 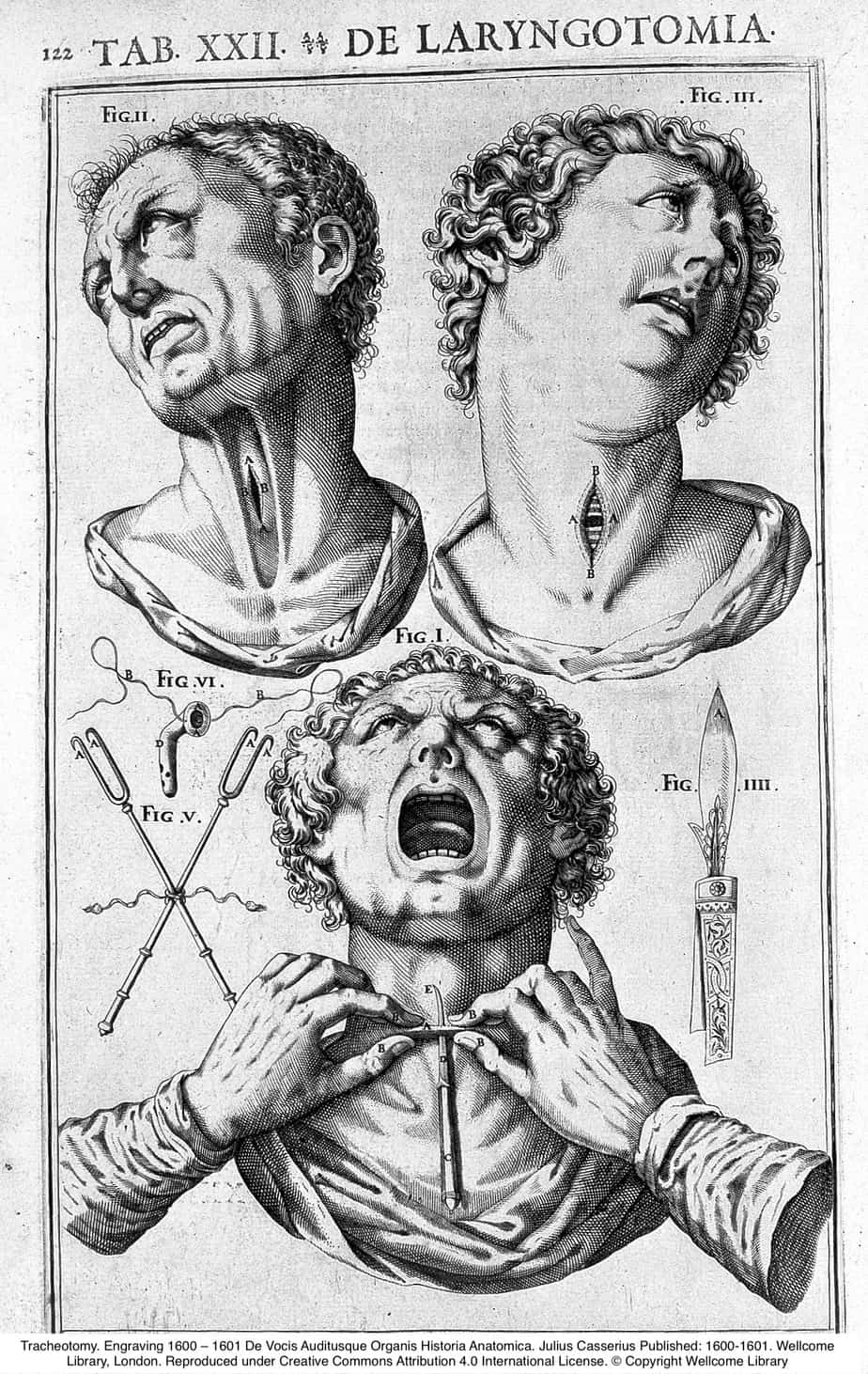 In A Practical Treatise on Foreign Bodies in the Air-passages (1854) by Samuel D. Gross, the author recounts a number of cases of choking. Remedies mentioned include inversion and inducing vomiting through the administration of an emetic. In at least one case the emetic didn't work and the patient died. He also notes a case where

On the 10th of May, 1846, a little boy...while playing with a hammer and some horseshoe nails, allowed one of the latter to slip into the windpipe. He was immediately seized with choking and violent cough. The cough for a time subsided, but soon returned with symptoms of slight pneumonia, which lasted a week. At the end of this period, as the boy was lying over a chair with his head downwards, a sudden clucking noise was heard, as if some substance had been thrown from the lungs up into the windpipe, and was at once followed by a paroxysm of suffocation, threatening instant destruction. Placed erect, the obstruction was removed, and he became better.

In another case, the father of a girl who had swallowed a cowdrie shell "thrust his finger down her throat" and that seemed to solve the choking problem. However, about a year later,

she was suddenly attacked by a violent spasmodic cough and sense of suffocation, followed by the forcible expulsion of the remnant of the shell, the animal substance of which had entirely disappeared.

In several instances the object was simply coughed or thrown up without any external inducement, though sometimes only after a considerable period of time. In another case, patting on the back was seen to worsen the patients condition.

The absence of someone able to perform a tracheotomy and the fact that hitting someone on the back doesn't always work (it can actually make the blockage worse) may well account for some of the less likely 'remedies' our ancestors came up with. It is also worth noting that, even today, people die from choking. In the case of major obstructions in the throat, professional help may be the only way to save someone's life and all our modern technology does not change one simple fact: a complete blockage of the windpipe has to be removed in a matter of minutes.

All highlighting is mine.

Not the answer you're looking for? Browse other questions tagged medicine or ask your own question.

10
Was there any way to deal with infections in pre-modern times?
20
What historical conditions (culture, technology, events, etc.) contributed to China's current lead in population?
9
When did the first organ transplant operation occur?
14
How did the Emperor Titus die?
6
When was acne first recorded in human history and how did it develop?
7
How did society regard identical twins in the 17th century in Europe?
13
Why did physicians recommend curing the “dancing plague” with more dancing?
11
How did Mehmed II die?
0
How prestigious was the medical profession given the inefficacy of most treatments?