Why and how did climate change affect the Mayan civilization?

Why and how did climate change affect the Maya empire? I thought climate change was a modern problem so I'm confused when my World History textbook says that its one of the reasons for the decline of the Mayan civilization.

Is climate change a "modern problem"?

No. Climate change is far from a modern problem, although some of what follows is disputed and is also simplified. The Late Antiquity Little Ice Age from around 536 to 660 AD is one example of climate change. An article in Nature Geoscience argues that, in Europe and Asia, this

...The Baltic Sea froze over, as did most of the rivers in Europe. Winters were bitterly cold and prolonged, reducing the growing season by several weeks. These conditions led to widespread crop failure, famine, and in some regions population decline.

The role played by climate change in the collapse of Maya civilization is a very complex issue and there is no overall consensus as to the extent of that role. However, droughts are generally believed to have played an important role at certain points. Further, these droughts may have been worsened by human activity - deforestation.

The article The Role of Climate in the Collapse of the Maya Civilization: A Bibliometric Analysis of the Scientific Discourse (pdf) looks at 433 research papers from between 1923 and 2016 and shows there is disagreement between paleoclimatologists on the one hand and archeologists on the other:

climate change seems to be a major factor for the downfall, and this is what the paleoclimatic methods (i.e., the analysis and dating of paleoclimatic records) illustrate.

However, many Maya archeologists still argue that the mega-drought theory doesn’t fit their findings, mainly due to the complexity of the process and inconsistencies between the water supplies of different centers and the timing of their collapse....For many archeologists, the collapse of the Maya civilization is not a resolved issue 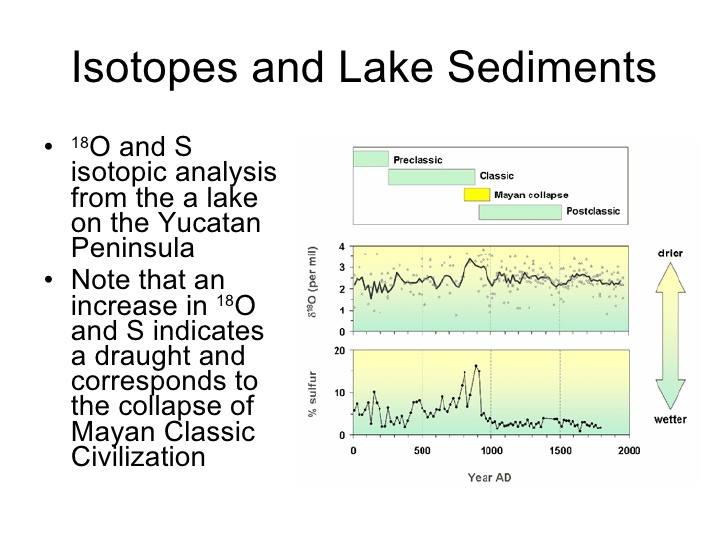 Source, originally from Hodell, et al, 1995 Reconstruction of Caribbean climate change over the past 10,500 years.

This abstract of the article Impacts of Climate Change on the Collapse of Lowland Maya Civilization broadly reflects the views of both sides, conceding that droughts caused by climate change cannot wholly explain the collapse of Maya civilization. At the same time, though, droughts did contribute to the collapse and also hindered later recovery.

Comparison with recent archaeological evidence...indicates an earlier beginning for complex economic and political processes that led to the disintegration of states in the southern region of the Maya lowlands that precedes major droughts. Nonetheless, drought clearly contributed to the unusual severity of the Classic Maya collapse, and helped to inhibit the type of recovery seen in earlier periods of Maya prehistory. In the drier northern Maya Lowlands, a later political collapse at ca. 1000 ce appears to be related to ongoing extreme drought.

This NASA article points to deforestation as being a possible contributory factor to worsening (natural) droughts:

...Mayan activities may have deepened the dry conditions. In an effort to sustain one of the highest population densities in history, the Mayans transformed the land. They removed nearly all of the forest and replaced it with agricultural crops.

Although population density figures are disputed, it is generally accepted that they were high (see some of the links below). Thus, while current concerns about climate relate primarily to human activity, we cannot rule out the possibility that, even over a thousand years ago, human activity also affected the environment, albeit on a much smaller scale. Clearly, further research is required to establish a clearer picture as to the role that climate, and the effects of human activity on the environment, played in the decline of Maya civilization.

In addition to the links above, you may find these articles to be of further interest:

Severity of drought during the Maya collapse (2018)

Why Did the Mayan Civilization Collapse? A New Study Points to Deforestation and Climate Change (Smithsonian Magazine)

Cities of the ancient Maya

Not the answer you're looking for? Browse other questions tagged maya climate or ask your own question.

6
How did the Mayans get cacao?
5
What led to the romantic perception of the Mayan civilization?
5
Did Cahokia have any communication with Mexica or Mayan civilization?
18
How did people in the desert stay cool in the past?
2
How far did climate affect civilisation development in the Americas?
1
Did the Maya civilization recognize that it was into an ecological crisis?
20
Why are some later Mayan scripts unintelligible to archaeologists, while earlier ones can be read?