Why did European writers and artists continue to depict the Moors as being black skinned, even though they were mostly Berbers and Arabs

The Moors were foot soldiers of the Ummayad dynasties of Syria who crossed the straits of Gibraltar into the Iberian peninsula. Later in that period, two new dynasties emerged: the Almoravids and the Almohads. They are said to have come from the Senegal river valley of West Africa.

What surprises me is that even though the Moors were largely Arabs and Berbers, the Europeans seem to have imagined them in a somewhat contradictory and unflattering way. There is a book by John V. Tolan which explains what I'm trying to say. It is titled Saracens: Islam in the Medieval European Imagination.

The Song of Roland is an epic poem based on the Battle of Roncevaux Pass in 778, during the reign of Charlemagne. It is the oldest surviving major of French literature. Below are some excepts that demonstrate the contradictions I'm talking about.

.... Then canters forth with all his great army.

Canters before a Sarrazin, Abisme,

More felon none was in that company;

Cankered with guile and every felony,

He fears not God, the Son of Saint Mary;

Black is that man as molten pitch that seethes;

Better he loves murder and treachery

Than to have all the gold of Galicie;...

... And Ethiope, a cursed land indeed;

The blackamoors from there are in his keep,

Broad in the nose they are and flat in the ear,

Fifty thousand and more in company.

These canter forth with arrogance and heat,

Then they cry out the pagans’ rallying-cheer....

Such discipline of Sarrazins he’ll see,

For one of ours he’ll find them dead fifteen;

When Rollant sees those misbegotten men,

Who are more black than ink is on the pen

With no part white, only their teeth except,

Then says that count: “I know now very well

This is a short documentary of the Moorish contributions to Europe. It also highlights the darkness which surrounds European perceptions of this period and the Moorish people.

Blackamoors is a decorative art form that arose as a result of the 800 year Islamist domination of Iberia. In this art form, Arabs and Berbers seem to be largely missing.

From a historians point of view, what is the reason for the disappearance of the Arab rulers from European imagination (artists and writers) and their replacement with subsaharan African slaves 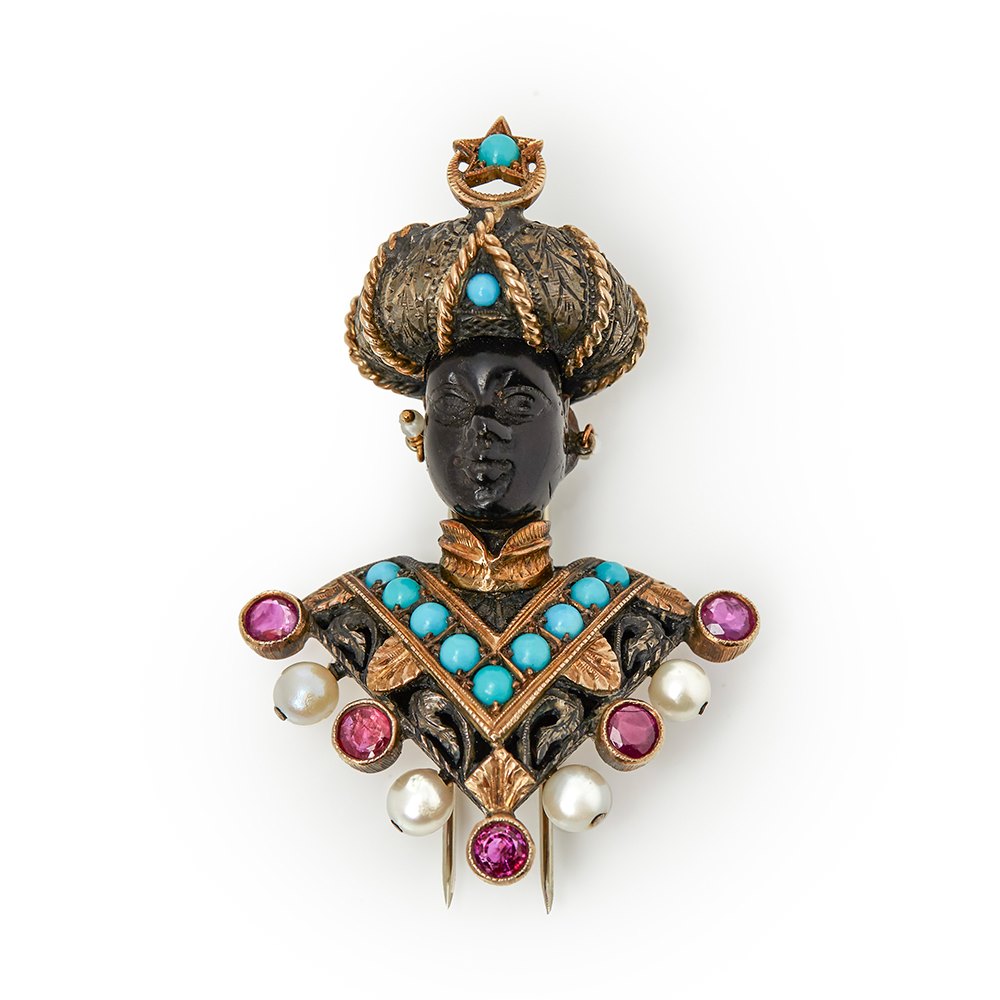 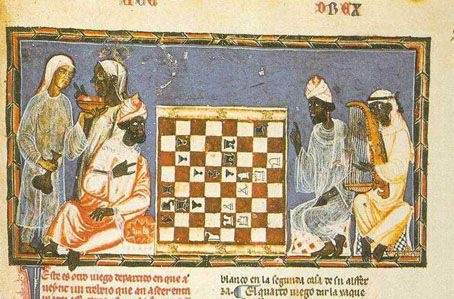 The "Moors" were a very diverse group.

The first invading "Moors" were Arabs and Berbers from North Africa, the Berbers being descended from the Moors of Classical antiquity and thus probably mostly looking like other Mediterranean people.

Muslim invaders and later immigrants intermarried with native Spanish converts to Islam and with Christian and Jewish Spaniards.

Furthermore, rich Muslims including monarchs usually had a number of slave concubines, often imported from thousands of miles away, who usually became the mothers of their sons and heirs.

The movie The Long Ships (1964) features vikings vs Muslims. Sidney Poitier, an African-American, portrays a "Moorish" ruler of a land that might be in Spain and/or in Morocco, since it is not too far from the Pillars of Hercules (Gibraltar). There is a Scandinavian king Harald in the movie who I thought was supposed to be King Harald I the Fairhaired (reigned c.872-932) of Norway but is said in some sources to be King Harald I Bluetooth (r. c. 958/59-958/86) of Denmark.

If by that time an Arab ruler could look like a northern European as Caliph Abd ar-Rahmin III did another Muslim Arab or Berber ruler in that era could have looked like an African-American if he was descended from enough sub Saharan slave women. But I doubt if the filmmakers were thinking about that; they were probably influenced by the stereotype of "Moors" being very dark.

Thus by about 950 AD the Muslim leaders and warriors who interacted with Spanish Christians in peace and war could look like anything from light skinned blue eyed blond northern Europeans to black skinned, black eyed, and black haired sub Saharan Africans.

Many warriors in the later invading Almoravid and Almohad armies were black Africans from south of the Sahara Desert.

I believe it was the exotic nature they were going for. Moor came to equate with foreign and negroid people were the most foreign looking at the time. There is also St Maurice who was depicted as Negroid from at least the 13th century. His depiction varies from Roman soldier to negro dressed as a knight. While the original St Maurice came from Thebes, Egypt, his name was likely conflated with Moorish during medieval times where the word later became synonymous with foreign.

You can also compare Morris Dancing where the word Morris is thought to derive from Moorish though this could be conflating the words due to similarity like Maurice. Morris dances often involved a blackface character so there could be another coincidental link there. The blackface character could share origins with the Zwarte Piete of The Netherlands.

The key is the theoretical term "Imaginary." The imaginary is a post-structuralist influenced term which claims that cultures have, effectively, a collective subconscious. As you note the "imaginary" of the Muslim from North Africa stabilised on a black or dark depiction long before the triangle trade reformed Western European racism on an economic basis. The depiction is entirely unrelated to the reality of people in North Africa and entirely related to what lay in North Western European cultures.

We know from urban accounts in North Western Europe, and from Shakespeare, that "the Moor" or dark skinned people weren't viewed through triangle trade racism. So I'd suggest a combination of traditional saints depictions, "Africa" being distant and indirectly experienced, and an accumulated tradition casting "the Moor" as other.