Who are the three men standing and what are they holding at this University of Paris Doctors' Meeting?

The image below is used on several sites but none of them give much information on this painting other than "Medieval Education in Europe: Meeting of Doctors in the University of Paris" and the source ("Chants royaux" manuscript, Bibliothèque Nationale, Paris). The painting itself is Early Modern but apparently depicts a Medieval scene. 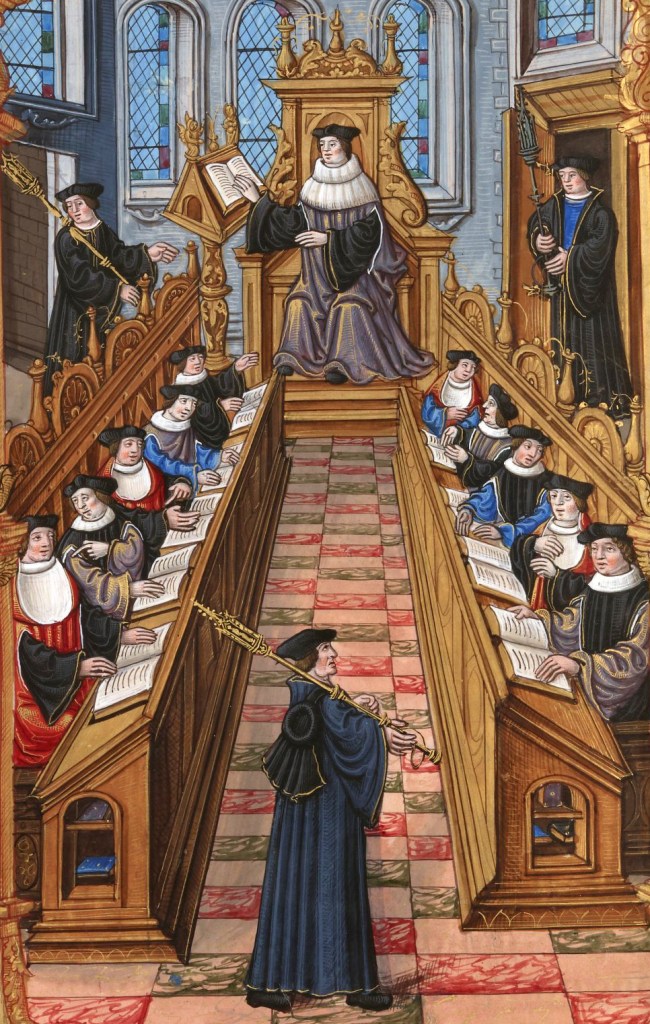 Image source: MEDIEVAL EDUCATION IN EUROPE: A FORCE OF FREEDOM AND SUBMISSION

The same image is also used in the article Contro l’homo academicus. Il corpo vorace delle logiche accademiche, on the Scholasticum site and quite a number of others. The scene depicted may be one of the three Condemnations of 1210–1277.

Who are the three men standing, what are they holding and what is their function at this meeting?

The three man are, also according to the text, the three rectors present at a faculty meeting. The staffs they are carrying are rectorial staffs ("Rektorstab"), symbolising their honour and autonomous power over jurisdiction in matters regarding the university. It seems that in English this is similar to a staff of office and similar to ceremonial maces.

Finding an official and precise English term for Rektorstab seems difficult. This German word, plentiful attested in old books is now not even any longer in the most official German dictionary, the Duden. So for the purpose of this answer, I'll go with a suggestion @Sempaiscube gave in comments: let's call this a "Rector's Staff-of-Office".

The text Chants royaux sur la Conception, couronnés au puy de Rouen de 1519 à 1528 does not really give away much of what the picture transports, as the illuminator Colaud seems to really just provide an illustration for how theological disputations are to be imagined within a university. With authority over what is true or not. Compare the indication that this is about discussing religious doctrine by looking at the full page:

These staffs fell mostly so thoroughly out of use that finding one depicted on the net seems quite difficult. It became even more symbolic in now only mentioning the staff symbolically as in "she takes over the rector's staff" as in "someone takes over the office".

This staff is just like the mortarboard (seen in the picture above in this variant) an integral part of medieval university ceremony. In that time you not only got the hat on graduation but also a baton, increasing in length, thickness and literal beating power as they were dual use: symbolising learned behaviour and beating that into those beneath you.

Baccalaureat or bachelor is related to the bakel or Rohrstock, in later times its usage was reduced to just instrument of punishment: 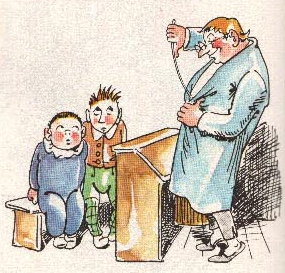 this then increased to the magister's, then the doctor's staff, and ended in this fasces-like looking staff that was usually of men' height.

As it fell out of use, I only found mostly images like the following when it is used in a humorous carnival setting: 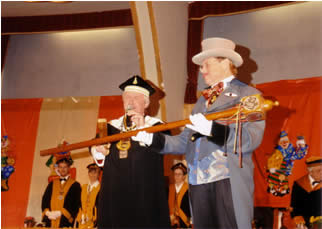 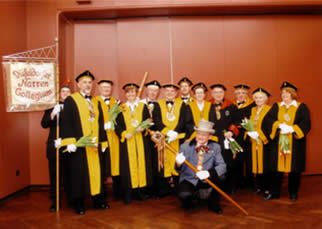 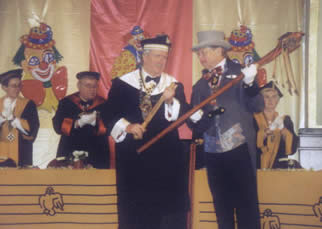 But here is one authentic one: 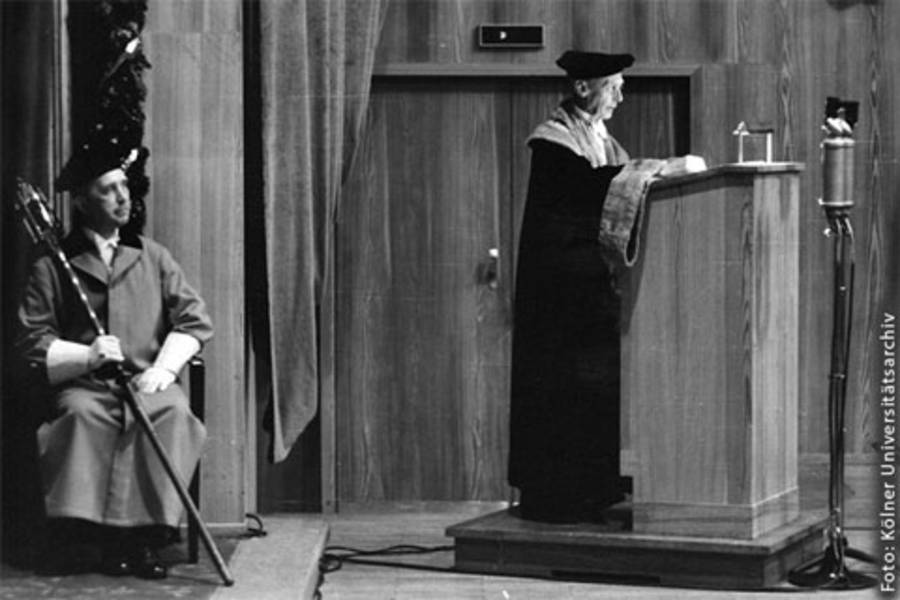 The one with the staff is the bedell, the picture is from University of Cologne, 1938, the staff newly made in 1929.

Note that the bedells varied from country to country and also had their own staffs: 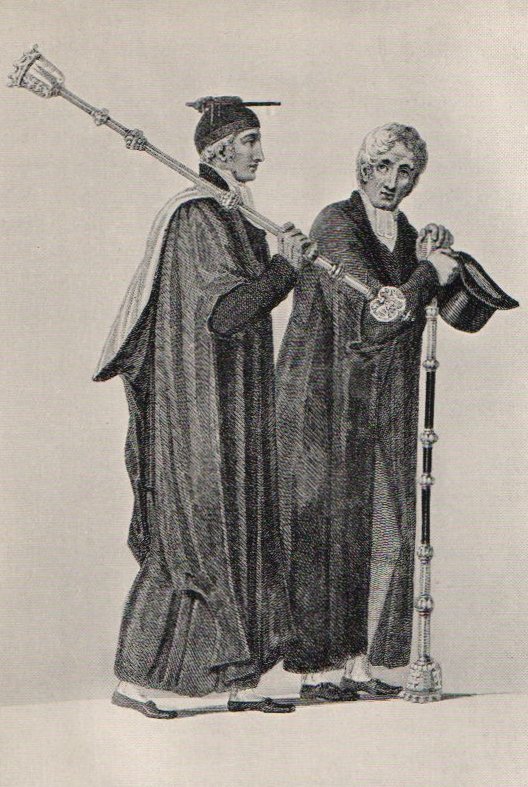 These rector's maces were so important in symbolism that for example the university of St Andrews ensured to buy those first, before they had any books to study or buildings. Some later designs then went indeed more from a staff with a fasces like design to more like mace design.

Commentator @bmaderbacher has found ongoing use in ceremonial fashion in Austria:

By searching for "Inauguration Rektor" I found some Austrian news articles with pictures of a Rektorstab. You might want to edit those in.

Thanks again to @bmaderbacher a synonym for Rektorstab is apparently Universitätszepter (sceptrum universitatis). The Wikipedia article on that gives a nice definition:

Like the seal (Typar), the university sceptre (sceptrum universitatis) is one of the insignia of the late medieval university. They have existed since the 14th century, usually as a couple. In this way the university demonstrated to the outside world its special legal status, namely to be its own corporation with its own jurisdiction and thus its own domain and as a sign of the dignity of the rector. In some universities, the scepters were carried through the pedelle at ceremonial occasions in front of the rector.
It thus leans against the princely scepters both in form and function. They have a long shaft, usually divided by knobs or rings, and a crown as the upper end and a knob as the lower end of a handle. It is not uncommon for university scepters to have been elaborately produced or reworked over the course of time, both through their use, which had not always been careful, and through changing artistic tastes.

Not the answer you're looking for? Browse other questions tagged middle-ages identification education early-modern or ask your own question.

11
Who are all the people in this photo of the signing of the Civil Rights Act, 1964?
9
What universities existed in Dutch East Indies, and how available were they to the native population?
10
What is the earliest evidence for the use of hearing aids?
1
What are the dimensions of the house in this picture?
33
What is the date and original source of this medieval picture?
8
What are the origins of this pendant?
30
In this cartoon from Puck, what indicates the identities of France and Britain?
14
What is the "bag on a stick" Hercules is holding in this picture?
0
What are this uniform and these medals?