What is this war machine shown on Trajan's column?

The most comprehensive visual evidence about Roman army of I-II centuries is the Trajan column. It shows in great detail cloths, weapons, ships, military machines and other equipment of the Roman army. Here is an enigmatic depiction from this column:

The image is taken from this web site: 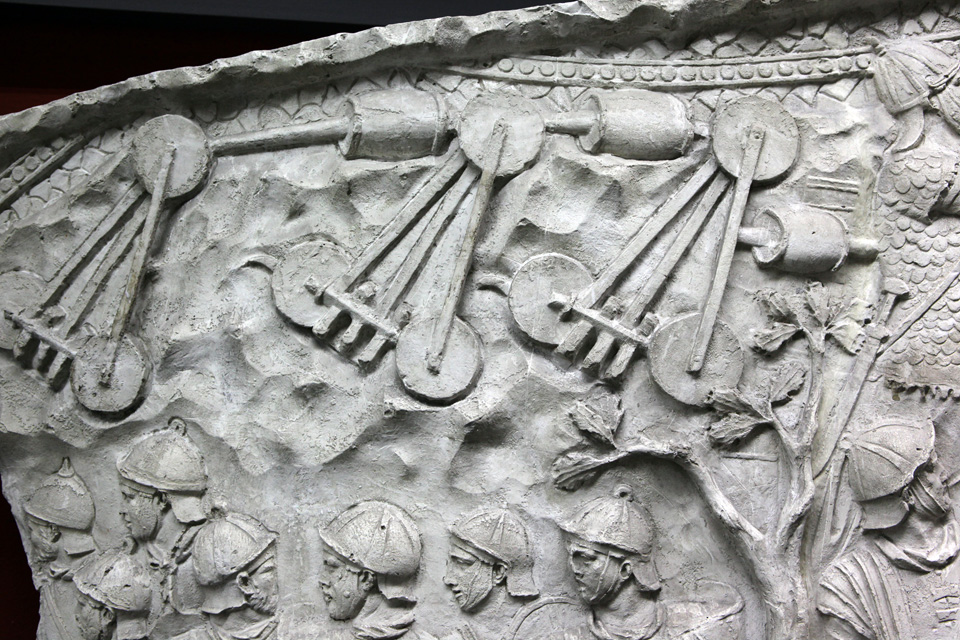 It seems from context that this is some siege equipment. What could this possibly be?

This actually came up in discussion when I was studying the archaeology of Roman Britain.

In fact, as far as I'm aware, nobody knows for certain, but several archaeologists that I have spoken to suggested that they were meant to be three-wheeled plutei, which were screens intended to protect the attacking force besieging a city.

The objects can be seen here in context against the walls of the city: 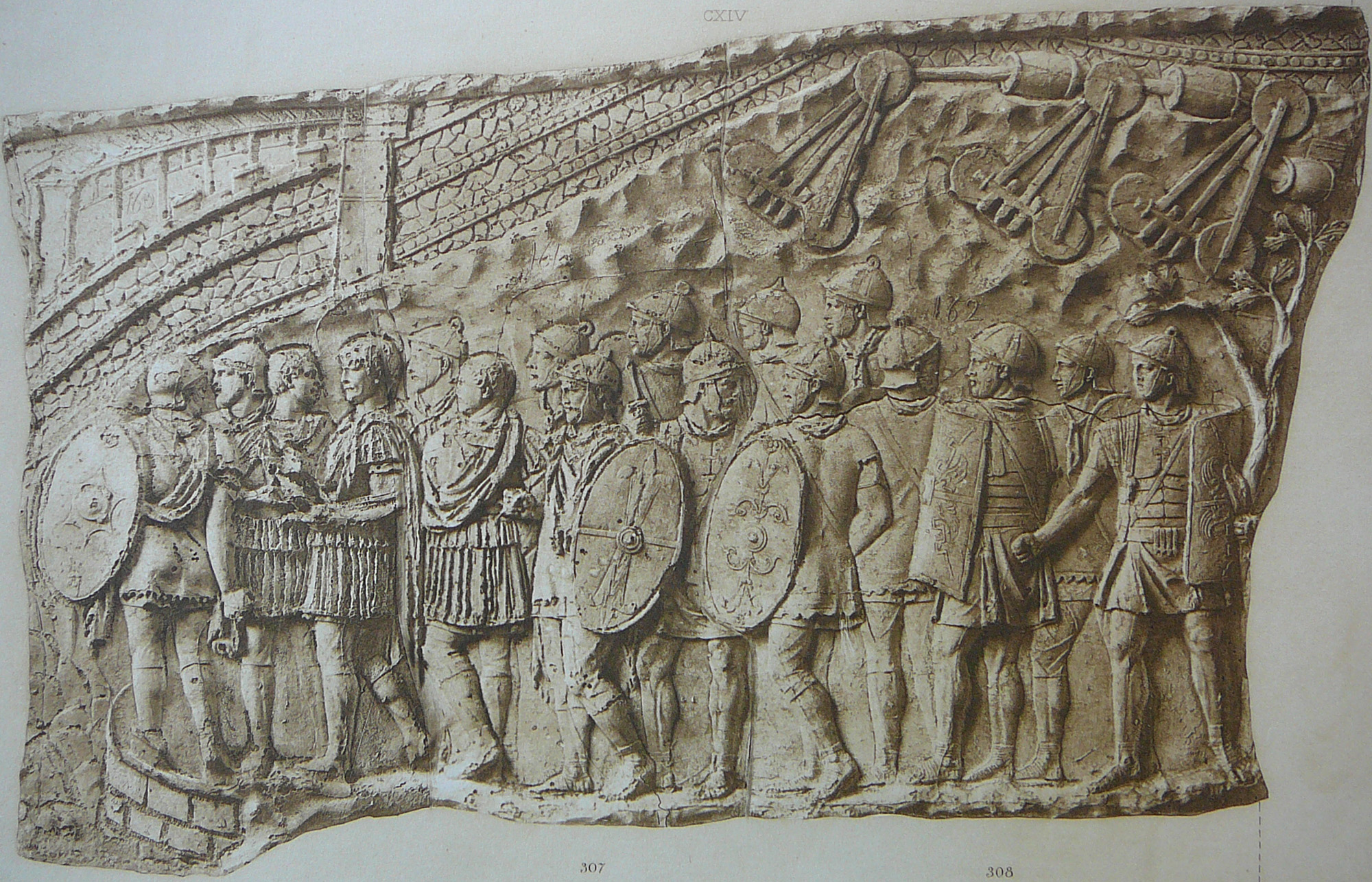 Plutei and other forms of protective shield are described in Vegetius' Epitome of Military Science (pp128-129). In fact, in the linked edition, in the footnotes on page 129 the editor, N.P Milner, notes that:

The triangular chassis with three wheels which are illustrated on Trajan's column, Cichorius Pl. LXXXV scene cxiv, may be intended to represent plutei.

It is worth noting that the archaeologist Ian Richmond, then at the British School at Rome, was of a different opinion. He did not consider that the objects were part of the Roman siege equipment at all.

In his paper Trajan's Army on Trajan's Column, published in Papers of the British School at Rome Vol. 13 (1935), pp. 1-40, he discusses the features of the objects and concludes that it more likely that the objects represented festucae, or 'pounders' used in the construction of the Murus Gallicus, and as such, would have been used by the Dacian defenders, rather than the Romans attacking the city of Sarmisegetusa.

Such devices are mentioned by Vitruvius in Book 3 of his De architectura where he describes the construction of temple foundations:

"The spaces between the columns are to be arched over, or made solid by being rammed down, so that the columns may be held apart."

Professor Richmond went on to argue that:

"... their presence here will indicate that this part of the fortification was newly completed, shortly before the arrival of the Romans."

This interpretation has the advantage that it does at least explain all the visible features of the objects but, as I said earlier, it is not possible to be certain.

It seems to be not entirely clear. But it also seems to represent an unusual depiction of an otherwise well known instrument:

Another view of the relevant picture: 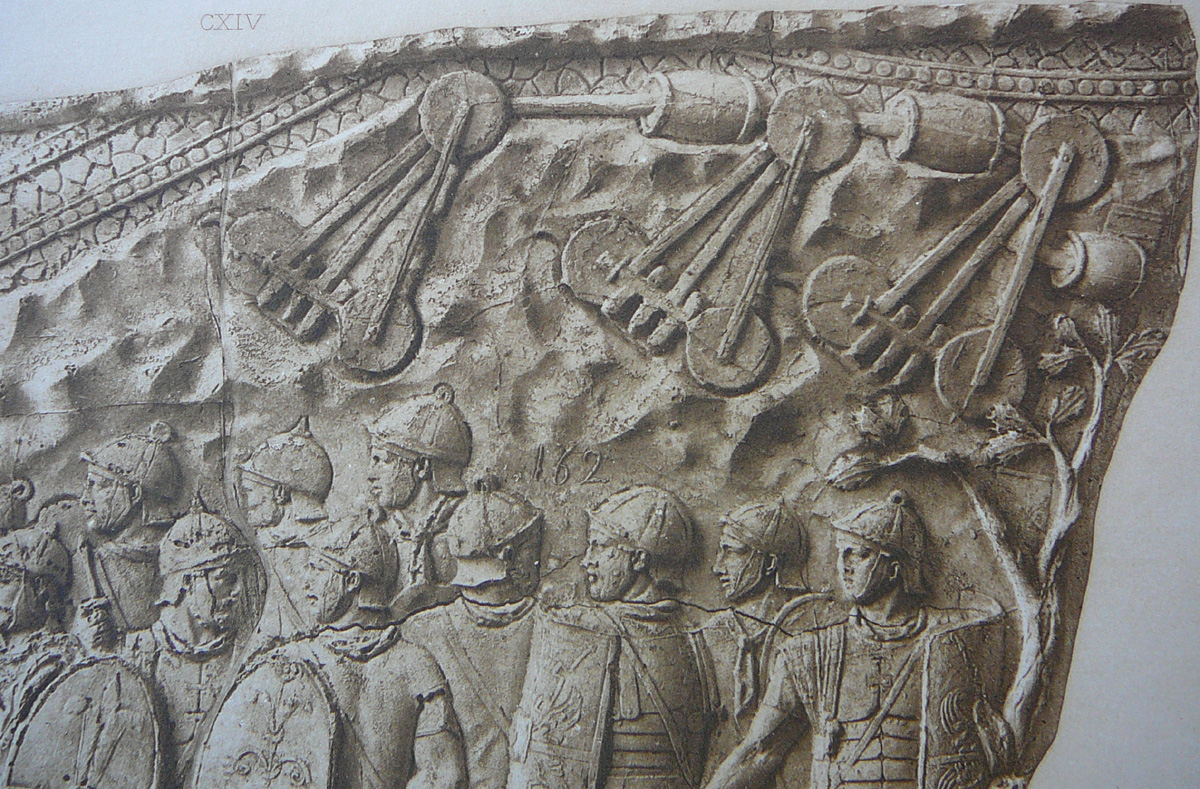 In the original called the Schiffsbugschildkröten of Apollodorus. If true then it would be one of his Poliorketika, another form of testudo or (chelone).

This work of Apollodorus seems to be this one:

Personally, I'd been lead to believe this looks most likely like a crossbreed between an early trebuchet and some kind a wrecking ball, although both are not recognised at such an early date.

The explanatory text given on the site where the picture in the question was found says:

TRAJAN'S COLUMN LXXXV/CXIV (Scene 114): War Machines
Scene 114/CXIV: Close view of odd machines that have been interpreted variously as serving offensive or defensive purposes: "anxious to show these things to the best advantage, the Maestro has raised the line of the wall almost to the top of the scroll, leaving him just enough room to display their component parts, but no room to show how they were operated and by which side" (Lepper/Free 1988: 165).
From cast 308, now in the Museo della Civiltà Romana, Rome. Compare Cichorius Pl. LXXXV, scene 114 and Coarelli Pl. 140. Ref: RBU2011.8203

But the more widespread conjecture is that:

The curious wheeled machine in scene CIV is stylistically very similar to a surviving drawing from Apollodorus' Poliorcetica and may represent another direct input from this architect, *albeit one misunderstood by the sculptor.[…]
The strange device depicted in front of the polygonal masonry wall in scene CXIV has attracted a great deal of scholarly speculation, non of which has solveed the problem of its function. It corresponds with no known form of ancient artillery, wall-batterer, pile-driver or defensive engine. Detached examination reveals no logical explanation of its working parts. Its main compositional role on the frieze seems to have been to fill the empty space above the group of Roman soldiers in the scene and the sculptor himself evidently did not have much idea of what he was depicting. The triangular frameworks of beams with associated circular objects are most reminiscent of the tread-mill cranes which would have been visible around the forum-basilica building site, but this observation only makes the device's obscurity more surprising, given that such cranes were intelligibly depicted elsewhere in Roman sculpture. A surviving manuscript illustration from Apollodorus of Damascus's Poliorcetica pictures a siege tower on little wheels like those in scene CXIV, and employs the same overall perspective style. This again suggests Apollodorus' direct involvement with the frieze and further reveals architect's general knowledge of military engineering. It does not, however, provide enlightenment as to the function of the device in scene CXIV.

Not the answer you're looking for? Browse other questions tagged military roman-empire identification or ask your own question.

5
What is "quarter column"?
6
What uniform is this?
8
What branch of the military wore this uniform?
21
What's the festival shown in this illustration?
8
What are these items in this 16th century plan of an English town?
8
Is this a US Civil War uniform?
32
Did ancient Romans anticipate the fall of Rome?
23
What is the spiral-looking device shown in this wall painting?
9
What is the purpose of this Roman siege tactic as shown in this Illustration?