Where was the site of Mary Seacole's store in Aldershot?

Mary Seacole is best known for running a boarding-house for officers and their families during the Crimean War. I have found a few reliable sources suggesting that on her return to England she briefly opened a canteen at Aldershot, but this business soon failed (see, for example Oxford Dictionary of National Biography, and Mary Seacole Information), but other sources, like the Florence Nightingale Museum fail to mention this;

The Wikipedia article claims she merely considered doing this and never actually followed through, but provides no source for this claim.

We have an opportunity to visit Aldershot in the near future but I can't find any information about where this business was, or even if it was in the town centre or on the army base.

Is there a record of its location?

Although they may have considered doing so, as far as I can make out, Mary Seacole and Thomas Day never actually established their business in Aldershot.

I assume that many people will already be familiar with Mary Seacole's memoir, Wonderful Adventures of Mrs. Seacole in Many Lands, and so will be aware that the sudden end of the Crimean War and the evacuation of the British Army was a financial disaster for Mary Seacole, and she was left virtually bankrupt.

From her memoirs, it seems that she was one of the last to leave the Crimea, departing sometime in July 1856, but she

"... did not return to England by the most direct route, but took the opportunity of seeing more of men and manners in yet other lands."

We know that Mary Seacole arrived back in the UK in August 1856. Again, from her memoirs she says that:

"... we set to work bravely at Aldershott [sic] to retrieve our fallen fortunes, and stem off the ruin originated in the Crimea, but all in vain; and at last defeated by fortune, but not I think disgraced, we were obliged to capitulate on very honourable conditions. In plain truth, the old Crimean firm of Seacole and Day was dissolved finally, and its partners had to recommence the world anew."

However, the bankruptcy notice published in the London Gazette on 28 October 1856 makes no mention of a business, or even an address in Aldershot: 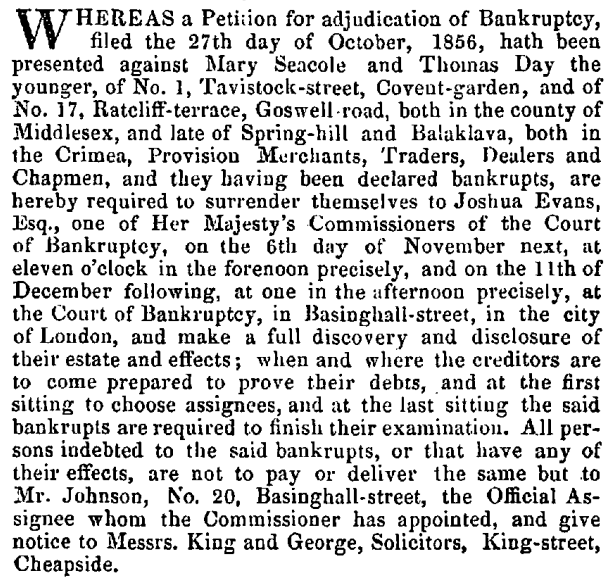 The current addresses for both Mary Seacole and Thomas Day are in London. Their prior addresses were in the Crimea. So I think we have to conclude that they probably attempted to establish a business in Aldershot (as suggested my Mary Seacole in her memoirs), but that they were unable to do so before their creditors filed for bankruptcy against them.

Copies of the bankruptcy notice were also subsequently filed in

The address details for Mary Seacole and Thomas Day are the same in all the notices.

Not the answer you're looking for? Browse other questions tagged 19th-century united-kingdom or ask your own question.

6
Where were the Mormons going?
2
English society in the early 19th century: Was aristocracy including royal members?
2
Two ships named "Mary Celeste" -- concidence or not?
1
Where can you find online the voting records for the both Houses of the UK Parliament?
11
When did the last (non-tourist) commercial stagecoach line run in the USA?
8
Where was the first European electric tramway operated?
7
What was located at the site of Madison Square Garden in 1850?
4
What will be the regnal number of the next Queen Mary in the UK?