Did the Nazis doctor photos in order to make Hitler look as good as possible?

There are people online who swear these photos of Hitler with kids, dogs and the like are real and were covered up. https://donotlink.it/EXJq

Now I already know that Imperial Japan used censorship and doctored photos during the war. So I am wondering how bad was it with the Nazis?

There are a small number of photos featuring Hitler which have been doctored but the practice does not appear to have been as common a propaganda tactic as, for example, staging events, controlling what people saw / read / heard or sometimes suppressing news. Nor does there seem to have been any attempt to make Hitler look physical better.

One example of a probably doctored photo shows Hitler in a crowd, patriotically cheering the outbreak of WWI. The photo (the copies below were first published in 1932) was taken by Heinrich Hoffmann, who was to become Hitler's official photographer and 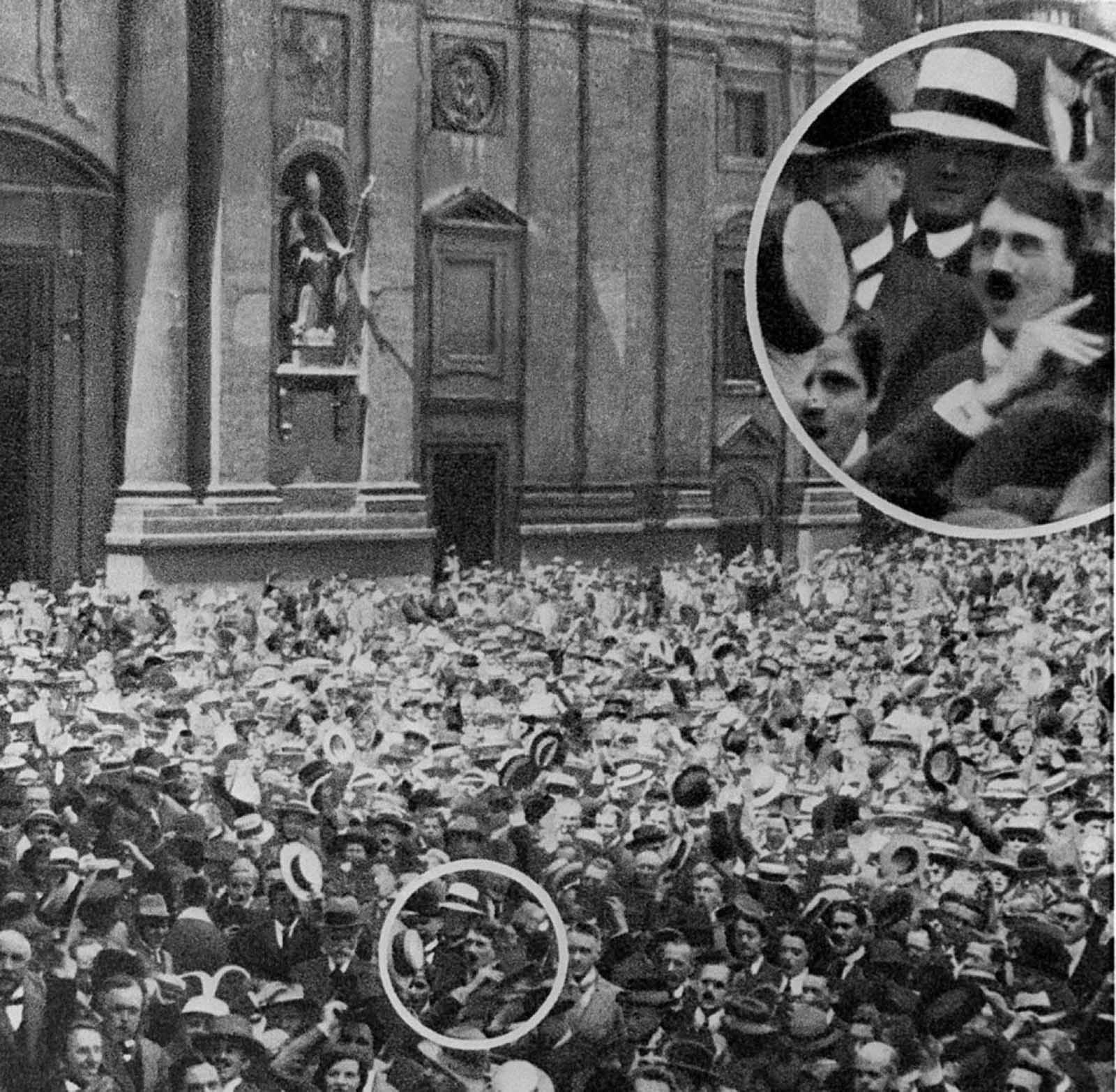 Source: A young Hitler cheers the start of World War One, 1914 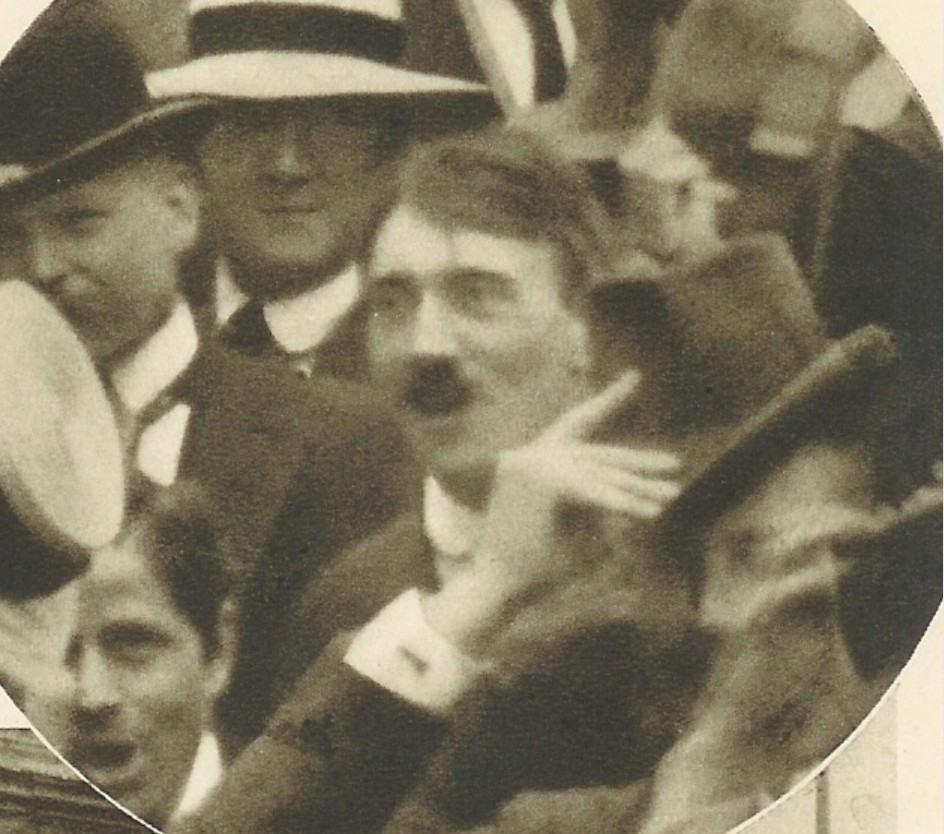 Source: UC Santa Barbara, Hitler and the Outbreak of World War I: A Forged Photo?

There are several reasons why this photo is most likely a fake. First, it is extremely unlikely that Hitler had the toothbrush moustache at this time. Hitler

was only obeying orders when he shaped his moustache into its tightly-clipped style. He was instructed to do so in order that it would fit under the respirator masks, introduced in response to British mustard gas attacks.

These attacks did not start until late 1917. Also, this from an article on Rare Historical Photos

The practice of shaving mustaches down to a “toothbrush” shape seems to have been introduced during the war to allow men to wear gas masks more comfortably; the fashion was unknown before 1914.

If the photograph is correct, then Hitler, almost alone in Europe, wore a toothbrush mustache in 1914, grew a big mustache during the war, and then went back to a toothbrush style after the war, none of which seems very likely.

Below are several photos of Hitler during WWI. Not conclusive proof, but googling shows no sign of a toothbrush moustache in early Hitler photos.

Another problem with this photo is that there is no negative even though there are negatives of six other photos taken of this crowd, but there are

Also, there is a particular motive for publishing this version of the photo in 1932 as

Hitler's patriotism was under fire during the Reich presidential election, because he had evaded service in the Austrian army.

There are a couple of other doctored photos featuring Hitler. One of these shows a cross has been removed from above Hitler's head as he exits a church. Another from 1937 (shown below), was doctored to remove Joseph Goebbels (it is unclear why this was done). 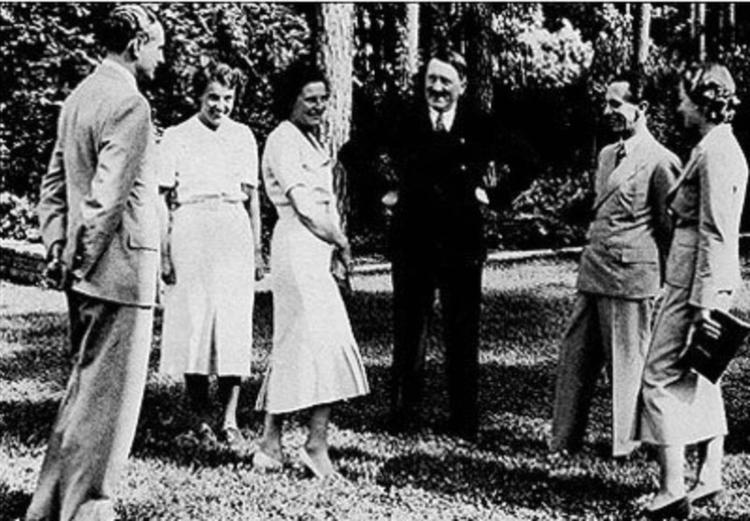 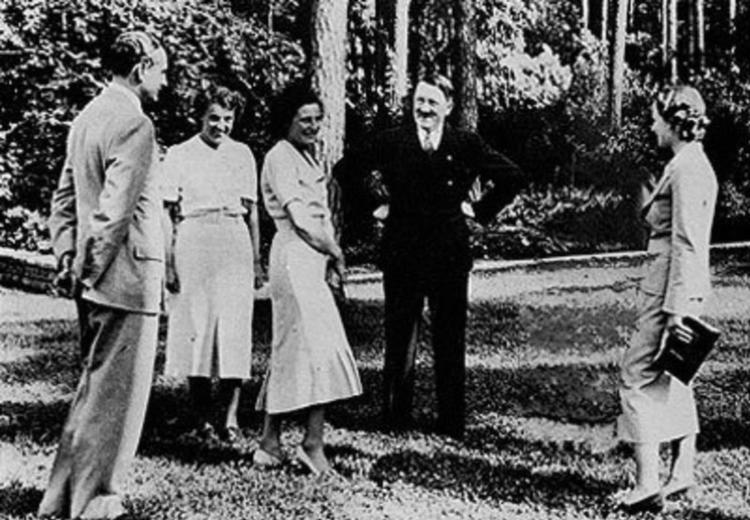 Source: Scientific American: Goebbels Doctored out of Hitler’s Nazi Picture. On Hitler's right is Leni Riefenstahl, director of arguably the most effective propaganda film ever made, Triumph des Willens (Triumph of the Will).

For the most part, though, the Nazis resorted to other tactics to make people believe what they wanted them to believe. The Wikipedia articles Propaganda in Nazi Germany and Themes in Nazi propaganda provide a fair amount of information on this. There is also a book by Aristotle A. Kallis, Nazi Propaganda and the Second World War; this makes no mention of doctoring photographs.

Photographs obviously did play an important role in Nazi propaganda, but this was by careful selection of what to show or not to show. For example, Heinrich Hoffmann

An example can be seen here. There's nothing special about these photos of Der Fuhrer in den Bergen (The fuhrer in the mountains), a booklet given to people who donated to a Nazi charity, but the accompanying blurb includes the propaganda message:

As the mountains remain eternal despite the passing of millennia, so, too, the work the Führer has begun here will live for millennia in the history of his people.

Of the staged events, the most obvious are the Nuremberg Rallies but there is one other staged event worth mentioning as it demonstrates how the Nazis faked what was in photos rather than doctored the photos themselves. The still below is from a Nazi propaganda film Der Führer schenkt den Juden eine Stadt (The Führer Gives a City to the Jews) which is

the only film known to be made by the Nazis inside an operating concentration camp. Germany’s Ministry of Propaganda produced this 1944 film about Theresienstadt, the “model” ghetto established by the Nazis in 1941 in Terezin, a town in the former Czechoslovakia. 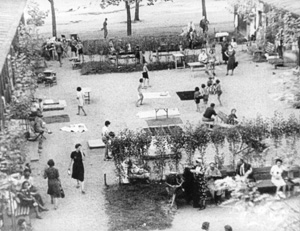 The whole thing was faked:

Gardens were planted, houses painted, and barracks renovated. The Nazis staged social and cultural events for the visiting dignitaries. Once the visit was over, the Germans resumed deportations from Theresienstadt, which did not end until October 1944.

On the issue of covering up mentioned in the link https://donotlink.it/EXJq, there is no evidence. Pictures of Hitler with kids, animals etc. are easily found on the internet, though it may be true they were hard to find before googling (as were a lot of other things). The author of the document in your link is a Nazi apologist who, on the basis of a few photos showing Hitler smiling at kids, argues (by Belgian Nazi collaborator Leon Degrelle) that "it was not in his [Hitler's] nature to be cruel". Right...

Lars BosteenLars Bosteen
96.6k1717 gold badges431431 silver badges496496 bronze badges
15
|  Show 10 more comments
-5
Want to improve this post? Provide detailed answers to this question, including citations and an explanation of why your answer is correct. Answers without enough detail may be edited or deleted.

Not the answer you're looking for? Browse other questions tagged world-war-two nazi-germany hitler or ask your own question.

15
Who was Frau Dr. Ebersberg?
15
What did the average German citizen know about the war?

50
Is the claim that Hitler came to power democratically justified?
8
Was Japan really part of the Axis?
76
Why, in the US, is Japanese brutality ignored compared with the Nazi brutality in WW2?
11
How much of Nazi iconography came from Hitler?
46
How did the Nazis plan to defeat America during World War II?
2
Did the militarists in Japan look to the Nazis as a model during their takeover?
5
Does any evidence exist that suggests Hitler’s primary reason for declaring war on America was an attempt to draw Japan into his war with Russia?
9
Why did the Nazis guillotine criminals but mostly hang political enemies, and why were the White Rose group an exception?
12
Did the Nazis identify as being Fascists? How exactly did they view themselves?