When has the U.S. refused to pay its debts?

In the late 1700s the U.S. refused to pay a large debt to France for money loaned during the American Revolution. (In this instance Congress decided. I do not know if the President had the ability to veto this act.) Have there been other times where the U.S. decided not to pay a debt? Has it been a decision that Congress made or the U.S. President?

In the late 1700s the U.S. refused to pay a large debt to France for money loaned during the American Revolution. (In this instance Congress decided. I do not know if the President had the ability to veto this act.)

Correct, in the 1780's, the United States defaulted on it's debt to not only France, the Netherlands, but to domestic creditors after the Revolutionary war when the country was organized under the Articles of Confederation. This was not because the United States disputed the debt, or refused to pay, but because the country was broke. The net result was the same though, the country's credit rating was such that it was impossible to get credit, the currency was not respected, and even American businesses had to be coerced to extend credit to the federal government. The Articles of Confederation did not provide a reliable way for the federal government to raise money, so the Federal Government had no money. The Federal Government was dependent upon the states for revenue and upon this required unanimous consensus. The Federal Government at that time also could not afford to pay Revolutionary War veterans salaries and war costs provided to it's armies by domestic creditors. These are some of the reasons that George Washington and James Madison first met to propose a new stronger association for the states. The United States Constitution. With James Madison being one of the primary organizers of the constitutional conventions and George Washington eventually being the President of the ratifying convention.

The President wasn't in a position to intercede because under the Articles of Confederation there was no office of President. That office and the executive branch of the government came about in the Constitution.

Constitutional Topics: Articles of Confederation
The United States had no independent power of taxation(under the articles of confederation), relying on the good faith of the states to pay bills sent to them for the maintenance of the national treasury. In several instances, such notices were ignored, and since the national government had no power of enforcement, there was little that could be done about the defaults.

Poor credit due to defaulting on debt was also an important reason why the capital of the United States is located in Washington DC and not the original Philadelphia or New York where General George Washington took the oath of office. 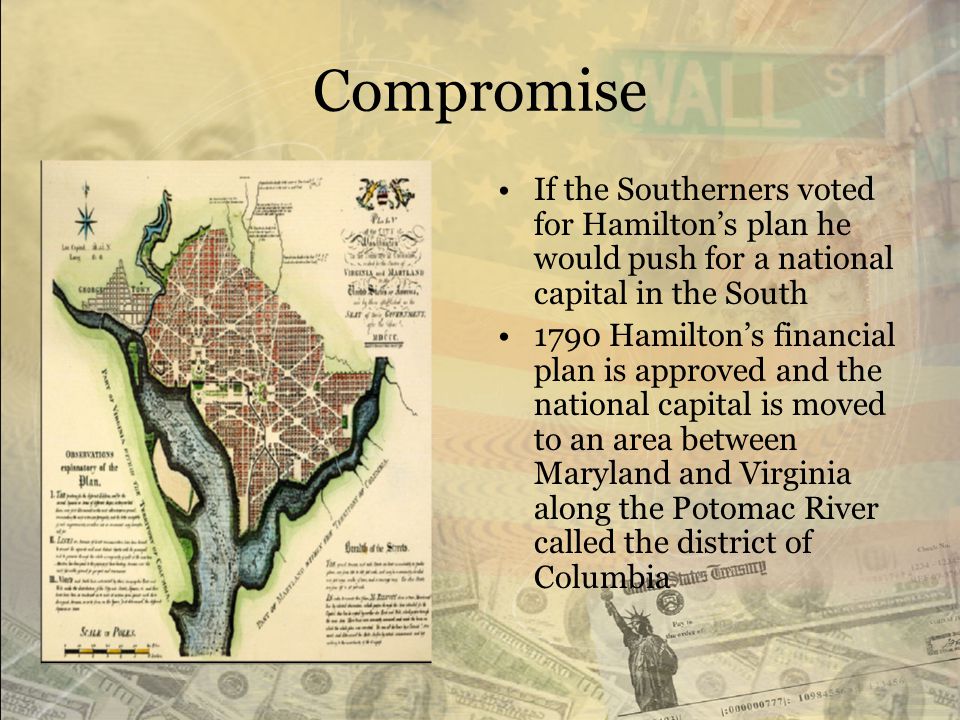 The Compromise of 1790. The best way to establish credit worthiness after such an abysmal record of repaying debt was to be in debt and pay that debt off. Since nobody would loan money given the poor credit, the debt needed to be assumed. After the Revolutionary war much of the war debt was broken up and divided among the state governments. In 1790 with the ratification of the Constitution, Alexander Hamilton the first secretary of the Treasury wanted to jump start the nations credit worthiness by re-assuming this revolutionary war debt from the states. Only southern states like Virginia had already paid off all their debt over the previous decade, and their representatives in congress were not motivated to have the Federal government assume what amounted to Northern war debt. In order to get agreement from southern states, Alexander Hamilton (of New York) and Jefferson(Virginia) brokered a compromise. The nation's capital would move from the north to the south, to Washington DC situated between two southern slave states, Virginia and Maryland; and the South would agree to allow the federal government to assume the war debt.

Yes, without including the revolutionary war era defaults, some say once, but technically 3 times all occurring within about 2 weeks of each other in the spring of 1979.

Under Jimmy Carter, The United States defaulted on treasury bills because Treasury’s Dept, was unable to pay due to a congressional budget limit showdown and various other reasons. The US paid a significant cost for these short lived defaults which has been estimated in Billions of dollars in increased interest payments.

Washington Post: Delayed payments in 1979 offer glimpse of default consequences
“You hear lot of people say, ‘The government never defaulted.’ The truth is, yeah, they did . . . It might have been small, it might have been inadvertent, but it happened,” said Terry Zivney, a finance professor at Ball State University who co-authored a paper on the episode entitled “The Day the United States Defaulted on Treasury Bills.”

Financial Review: The Day the United States Defaulted on Treasury Bills
Investors in T-bills maturing April 26, 1979 were told that the U.S. Treasury could not make its payments on maturing securities to individual investors. The Treasury was also late in redeeming T-bills which become due on May 3 and May 10, 1979. The Treasury blamed this delay on an unprecedented volume of participation by small investors, on failure of Congress to act in a timely fashion on the debt ceiling legislation in April, and on an unanticipated failure of word processing equipment used to prepare check schedules.

Some say even more: 5 times. Although I would cite the source I just gave… but perhaps you can back that up? – LangLangC

Interesting and thought provoking as always LangLangC. I think a few of those "default" examples reflect personal beliefs and biases of the author more so than history as interpreted without a political agenda. Having said this I do want to read up more on the Monetary Default #2.

Thank you for sharing the source.

Never has the US refused to pay its debts.

This is one of the many reasons why the US enjoys such a good credit and actually pays negative real interest rates (government borrowing actually saves taxpayer money and improves creditworthiness) since 2010 (and for 35 years after WW2).

The fate of the US debts had been the subject of much fight in 1790, and, thanks to Alexander Hamilton, the issue was settled.

(The link in the question does not indicate debt repudiation, but rather reflects souring the relationships with France due to its interference with US trade with Britain).

Not the answer you're looking for? Browse other questions tagged united-states economy foreign-policy or ask your own question.

5
When did the incident happen when bounty on rats led people to farm rats?
35
Was slavery really on the way out in the antebellum USA?
21
When was the American War of Independence first called a 'Revolution'?
8
Free states and slave states - how did that work?
12
How were new states admitted to the Union?
2
Was there a time when George Washington discovered some of his soldiers absolutely refused to swear loyalty and obedience to the Continental Congress?
3
Has any G7 country deliberately defaulted on sovereign debt to punish a certain country?
12
How close did the US come to removing the Electoral College in 1970?
7
How did East Indies oil lose its "top billing" in the Pacific War as the war went on?