Did Paul Robeson wash the US flag in protest?

I vaguely remember a story where the world-famous singer Paul Robeson, probably during an anti-war protest demonstration in the 60s, washed the US flag drenched in blood as a result of the policies of US administration.

Can someone confirm this and hopefully point to a source of information please?

My source of information (not recalled unfortunately) or I might perhaps have got the name wrong though. Perhaps somebody else performed this protest act...

Note: Thanks to the comments made below by justCal and sempaiscuba, we have so far found out the following that implies probably something like this did happen:

There is indeed one such record of protest action except the name of the US singer who performed it is not Paul Robeson, but Dean Reed, as seen here: 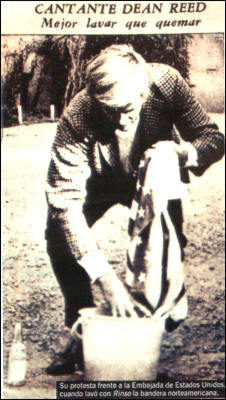 The famous US singer, songwriter, actor and director Dean Reed washed the flag of the United States (stained with the blood of millions of people in many countries, he said) in front of the US Embassy in Santiago de Chile on 1 September 1970, a week prior to the election of Chilean president Salvador Allende.

He was arrested by the Chilean police immediately there and then, but the world-renowned Chilean poet Pablo Neruda helped him to get out of jail. Some believe this played some part in the victory of the Unidad Popular (coalition of socialist and communist parties of Chile) led by Allende during that presidential election by a narrow margin of less than 1% which was overthrown by a bloody military coup d'état heavily backed by Washington in 1973.

Note: Thanks to Herbert Griessig for this answer offered on Facebook. Apparently I confused the name of the singer probably because I heard about this through a poem written for Dean Reed (which also mentioned Paul Robeson).

Not the answer you're looking for? Browse other questions tagged political-history or ask your own question.

5
Why did Thomas Jefferson almost lose the 1800 presidential election to Aaron Burr?
1
How long did historical sessions of the US congress last?
4
Did Friedrich Engels support the Chartist movement?
3
Did Luxemburg have a constitution in 1890?