Was there someone popularly labeled by public as “Lord Mum”?

My teacher said in a motivational speech that there was a person (some king or duke etc) who had to make a speech/sermon after assuming his hereditary office. But when he appeared before the public he couldn't say a word because he was afraid of public speaking. So the people jokingly named him Lord Mum, for his speech was nothing but silence ("mum" sound). Then he worked on his fears and delivered great speeches later.

I tried searching it on Google but found nothing. So can anyone tell if this story is true? My teacher told me this a few years ago so I cannot go back asking for references.

Your teacher was quite correct that the term 'Lord Mum' was a nickname given to James Harris, 1st Earl of Malmesbury, as applied, for example in this political satire from 1796, relating to his peace mission to France, now held in the collection of the British Museum: 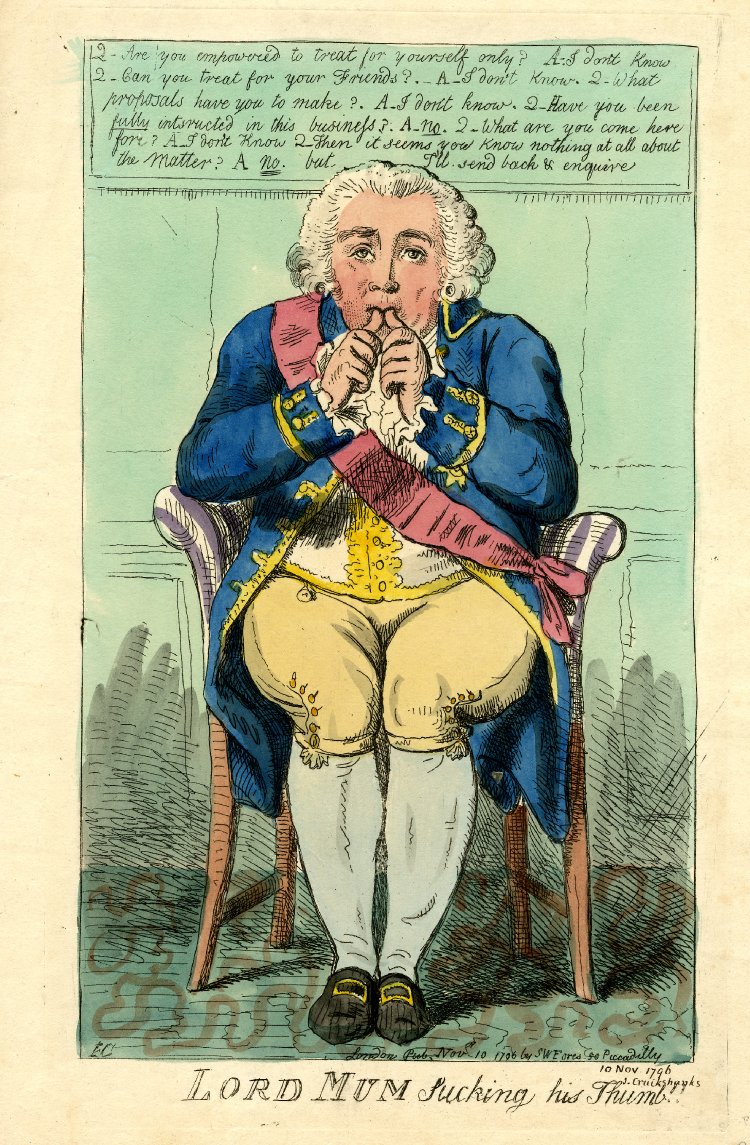 The text above Malmesbury in the picture reads:

or this example, Lord Mum overwhelmed with Parisian embraces, also dated 1796, and also from the British Museum collection: 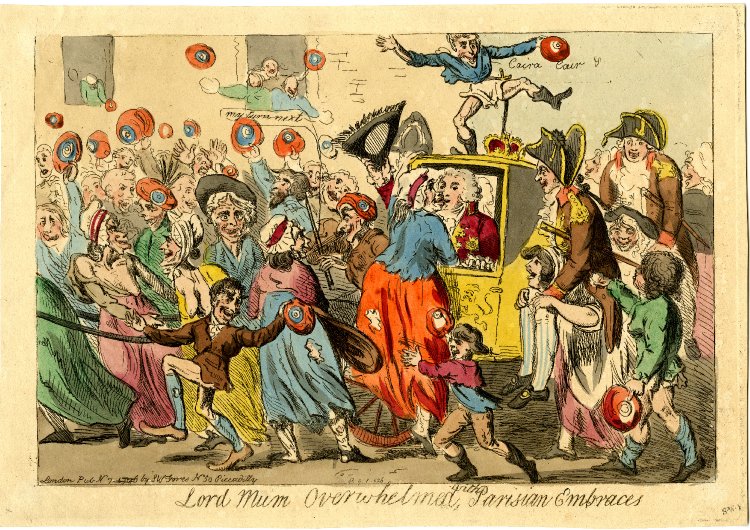 However, there doesn't seem to be any evidence that the nickname related to any fear of public speaking.

In fact, it seems to have been simply a play on his title. The 'l' is silent, so Malmesbury is pronounced "m AA m s - b er - ee", or more simply "Mumsbury", which reduced to the simpler 'Lord Mum', for the purpose of satire.

Interestingly, another contemporary satire (in the Lancashire dialect) titled Whistle Pig and Tom Grunt, by Tim Bobbin, esq (a pseudonym) uses a different play on Malmesbury's title, referring to the Earl as 'Lord Mumblebery':

Not the answer you're looking for? Browse other questions tagged british-empire or ask your own question.

16
Was there a social stigma for British born/living in India prior to WW2/Indian independence?
8
Was there a policy of preemptive attack on foreign fleets in the British Empire?
1
Is there any book depicting British rule in India from the eyes of British?
0
Was there intermixing between Brits and Hong Kongers during Britain's control of the territory?
1
Is there evidence to suggest the British Parliament was reluctant to deal with the Nassau Pirates because they made a convenient bogeyman?
3
When did $10,000 banknotes become available to the public in the British colonies of South East Asia?