Did the Soviet Union hand over thousands of Jews to the Nazis in the spirit of the Molotov–Ribbentrop Pact?

The most recent episode of the Italian documentary TV series Ulisse - Il piacere della scoperta (Ulysses - The pleasure of discovery) covered the deportation of Jews from Italy, and at some point it was stated that

before the outbreak of World War II, Stalin's Russia handed over thousands and thousands of Jews to the Nazis, in the spirit of the Molotov–Ribbentrop Pact.

Emphasis mine, but the way the host put it, he meant to specify that there weren't instructions for this action in the documents, but it was still done to please the Nazis - for what it's worth, the Italian phrase used by the host was in omaggio al Patto.

Is this true, in any way, or is it blatantly false?

It has been suggested that what the commentator said might have had a figurative meaning, as in handing Poland, and thus its Poles and Jews, to the Nazis. I also thought of this interpretation at some point, but it is not possible. Here is the transcript of the complete passage, in Italian:

I already paraphrased above the bit about Stalin's Russia, I'll consider the previous part:

What happened in Europe 70 years ago is certainly due to Nazi Germany, but it was often aided locally. Fascists in Rome and the rest of Italy helped the SS; elsewhere the same thing occurred, but in an even more organized way, because in Vichy France the police captured and handed over Jews to the Nazis.

And in the case of Stalin's Russia there is another example: before the outbreak of the war, it was the Russians themselves who delivered to the Germans, the Nazis, thousands and thousands of Jews, let's say in homage to an agreement that Germany and Russia had made, the Molotov-Ribbentrop agreement, which had established, so to speak, a kind of peace between the two nations.

In this context, it is clear that the host is going through instances of concrete collaboration, not figurative.

No - the Soviets did not hand over thousands and thousands of Jews to the Nazis before the outbreak of World War II. The claim is inaccurate. 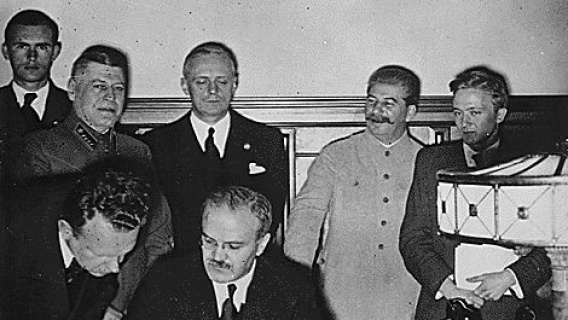 The pact was signed by Molotov (seated) and Ribbentrop (standing 3rd from left). Source: WW2History.com

The Molotov-Ribbentrop Pact was signed 23 August, 1939. World War II started 1 September, 1939 with Germany's invasion of Poland. This means there was one week between signing the Pact and the start of WWII. The Pact was only in force one week before the war started, so the Soviet Union, logistically, could not have

handed over thousands and thousand of Jews to the Nazis

in that one week after the signing of the Pact

before the outbreak of World War II.

Because there are some complexities involved in this issue which should be considered, three additional points for more context around the topic are included below.

The first point is added in case the documentary intended to imply a cooperation before an outbreak of hostilities between Germany and the USSR (22 June, 1941) rather than the outbreak of the War (1 September, 1939).

The second point is added to illustrate that while the claim in the Question is incorrect, and instead many Jews fled Nazi territories to the relative safety of the Soviet Union, that relative safety was not long enjoyed.

The third point below is added to lend support to the overall theme of the documentary cited in the Question, that many nations and territories cooperated with the Nazis in their murderous goal of purging Western and Eastern Europe of the Jews (including many local citizens and authorities in some Soviet territories).

1) From the signing of the pact in 1939 to the breaking of the pact in 1941 there is no documentation to support any Soviet-sponsored deportation of Jews from the USSR into Nazi controlled territories. In fact, to the contrary, Yad Vashem's article on the Soviet Union declares:

Following Hitler’s rise to power, Germany and the Soviet Union behaved as mortal enemies. One month prior to the outbreak of World War II, however, the two countries surprised the world by signing a "non-aggression pact" (Nazi-Soviet Pact), in which they agreed to abstain from attacking each other. This pact allowed the Germans free reign to invade Poland without Soviet intervention. In exchange, the Soviets were given the eastern parts of Poland and the Baltic countries of Latvia, Lithuania, and Estonia. Over the next year the Soviets also annexed Bessarabia and Bukovina, which had been under Romanian rule since World War I. Altogether, these new territories had a Jewish population of about 2 million. Additionally, about 250,000—300,000 Jewish refugees from German-occupied western Poland had fled to the Soviet Union after the war broke out. Jewish populations in these territories did not live under the best conditions but at this point, they were spared the systematic extermination suffered by Jews under the Germans. [emphasis added]

Thus we see, rather than Jews being handed over from the Soviet Union to the Nazis, an opposite effect was taking place: Jewish refugees were fleeing to the Soviet Union from Nazi expansion eastward into Poland.

2) No, the Soviets were not innocent of atrocities of their own against the Jews and Poles and other ethnic minorities. As the World Affairs Journal article on Soviet-Nazi Collaboration and World War II states:

Completely indefensible is the secret protocol that led to Poland’s partition in September 1939 and the subsequent Soviet attack on and incorporation of Estonia, Latvia, and Lithuania...

... during the two years the Soviets ruled Western Ukraine (the former eastern Poland), they destroyed civil society, dismantled all political and civil rights, deported hundreds of thousands of Poles, Jews, and Ukrainians to Siberia, and then, to top things off, massacred some 20,000–30,000 political prisoners in the week after the Nazis attacked in June of 1941. (About 70 percent were Ukrainian, 20 percent were Polish, and over 5 percent were Jewish.) ...

3) Yes, there was local collaboration and cooperation in some Nazi-occupied territories of the USSR. When Operation Barbarossa began, the fate of the Jews in the Soviet Union started to change (due to the presence of the Nazis). Yad Vashem's Soviet Union article continues:

The relatively good status of Jews in the Soviet Union did not last long. In mid-1941 the Germans decided to betray their pact with the Soviets and secretly planned to attack the Soviet Union in Operation "Barbarossa." In preparation for their invasion, the Nazis ordered the extermination of all Jews living in those areas annexed by the Soviet Union in 1939--1940. The Germans attacked on June 22, 1941. After the invasion, more than 5 million Jews came under Nazi rule, constituting over half of Europe's Jewish population. Einsatzgruppen followed the advancing army and with assistance from local collaborators and various police and regular army (Wehrmacht) units, they quickly massacred most of the Jews of the Baltic States, Belorussia, and the Ukraine by shooting into open pits. The remaining Jews were put into ghettos, and most were murdered within 12--18 months.

As indicated above, after the Nazis broke the Pact and invaded the Soviet Union and expanded into the western reaches of the Soviet Union, there was direct cooperation and Nazi collaboration among the locals in several areas, for example in the Ukraine and in Byelorusia, with the Einsatzgruppen in rounding up and murdering Jews (refer to The Holocaust in the Ukraine and The role of the Belarusian Auxiliary Police). But this was not a Soviet policy (local dissidents in some areas who viewed the Nazis as Liberators collaborated with the Nazis and were viewed as Traitors by the Soviet Union) and had absolutely nothing to do with the (now broken) Molotov-Ribbentrop Pact. 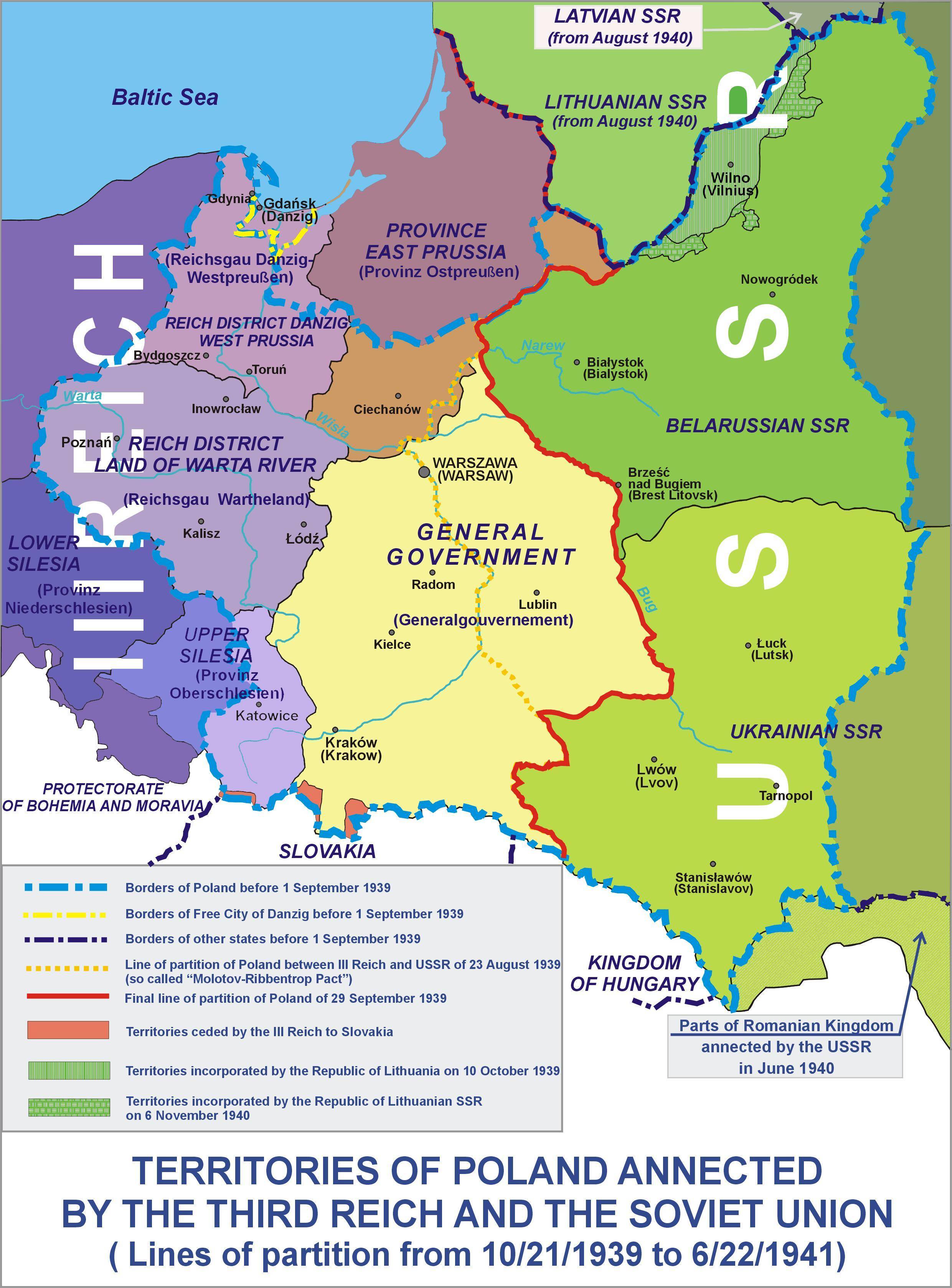 I believe the writers of the documentary are referring to the final negotiation of the Ribbentrop-Molotov Pact. Amongst other 'spheres of influence' the original version of the proposed agreement gave Lithuania to Germany and an area of Poland between the Vistula and Bug rivers to the USSR. The latter included the entire Voivodeship of Lublin and parts of the Voivodeship of Warsaw as far as the Bug. Stalin proposed a swap of this territory to Germany in return for Lithuania and Hitler agreed. (Source: 'Germany in the Second World War Volume IV' p.104.) Based on the 1931 census figures for the Lublin Voivodeship and the Warsaw Voivodeship , well over 300,000 Jews resided in these parts of Poland. By 1939 this figure would have been increased by population growth and the inflow of Jewish refugees from Germany, Austria and Czechoslovakia in the years following 1931. By comparison around 160,000 Jews lived in Lithuania, the result was that many tens of thousands of Jews could be said to have been 'handed over' by the Soviets.

Not the answer you're looking for? Browse other questions tagged world-war-two 20th-century nazi-germany soviet-union jews or ask your own question.

2
Was "Blitzkrieg" at least partly intended for trapping the Jews?