Who was Frau Dr. Ebersberg?

At a 1937 housewarming party held by German filmmaker Leni Riefenstahl, a Dr. Ebersberg appears in three photos with the hostess, Hitler, Goebbels and a few others. 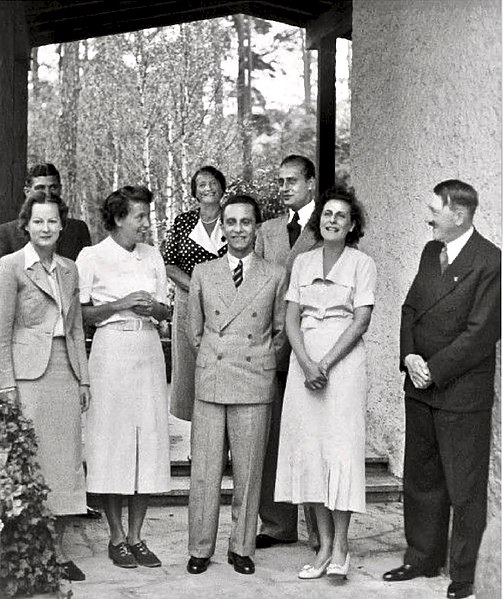 In the photo above, Dr. Ebersberg and Hitler are possibly sharing some witticism while the others are (more or less) paying attention to the photographer. There do not appear to have been any other people at the housewarming other than Hitler's photographer, Heinrich Hoffmann, who took the photos (but I could be wrong on this).

At the same event, Dr. Ebersberg also appears among a smaller group in the photo below. 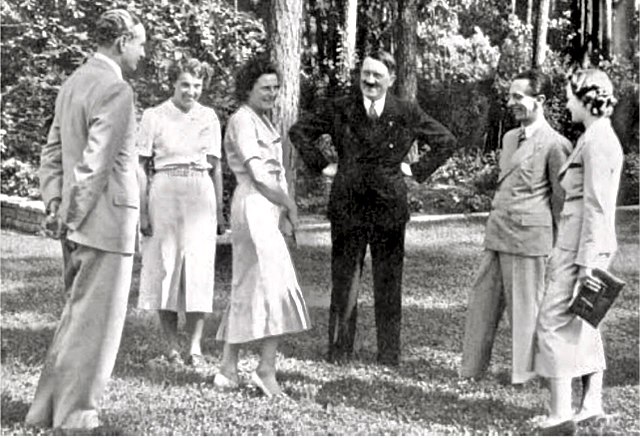 There are a few other photos from this party (see also this better quality one here) but none show any other people other than those already mentioned.

At this event, the presence of the Riefenstahl family is self-explanatory. Of the others, Hitler was a great admirer of Leni Rienstahl's work and Goebbels was obviously associated as Minister for Propaganda. Wiedemann was not only Hitler's personal adjutant but had also served with him in the First World War, while Hoffmann was also close to Hitler.

That leaves the Dr. Ebersberg. I've been unable to find out anything more about her, or why she was in such high-flying Nazi company. In a comment on another post, LangLangC observed that Dr. Ebersberg is not mentioned once "in 900 pages of LR's memoirs". She may have been the wife of the lawyer and judge Heinrich Ebersberg but (even if she was) this doesn't seem to explain anything as he does not appear to have had any connection with anyone at the housewarming party.

Who was Dr. Ebersberg? Other than in these pictures, was she connected to any of the principals (Hitler, Goebbels, Leni Riefenstahl) and, if so, how?

It seems a bit, but not totally, unlikely that "Frau Dr Ebersberg" was indeed the wife of Heinrich Ebersberg. As she was noted for being a very close friend of Riefenstahl. And she had a son: Horst Ebersberg, born in Kitzbühel, known for playing a Nazi in Hogan's Heros.

In an interview with Horst it is said:

Horst Ebersberg, born 1932 in Kitzbühel, talks to Christof Thöny about his eventful life and the history of his family. His father was friends with Hannes Schneider and his mother was in close contact with Leni Riefenstahl. For this reason his brother Lother got an important child role in the movie "Der weiße Rausch". As a pupil at the Stella Matutina in Feldkirch Horst Ebersberg was several times Vorarlberger pupil and youth ski master. A sports scholarship led him to the University of Denver/Colorado in 1955. Later he worked as an advertising photographer and copywriter. In the 1960s Ebersberg played in numerous Hollywood movies. After a variety of activities in the USA, he returned to his hometown Kitzbühel in 1990.

That there is only mention of having "had a father", without naming him, might indeed indicate a high ranking Nazi whose name is not to be mentioned. But in another interview Horst describes another incident, far from Berlin, when his father drew the architectural plans for a house in the alps "himself".

But that is probably misleading.

In a local newspaper, the "Kitzbühler Anzeiger", a more complete bio than on IMDB and others is to be found:

Horst Ebersberg was actually supposed to follow in the footsteps of his father, the well-known Kitzbühel physician Lothar Ebersberg.

Horst Ebersberg was born 75 years ago in Kitzbühel on 8 May 1935, the son of Dr. Lothar and Annette Ebersberg. His father was not only a well-known doctor, but also a well-known alpinist and skier. His mother learned skiing from the legendary ski pioneer Colonel Georg Bilgeri.

Not really relevant to the question, but interesting: Doktor Lothar Ebersberg is known for being a doctor in Kitzbühel and for fighting in the First World War:

In September 1914 the later Wahl-Kitzbühler Lothar Ebersberg was taken prisoner of war by the Russians on the Eastern Front - for the Austro-Hungarian Emperor the beginning of a voyage around the world. Officer the beginning of a world trip. Suddenly there are Russians in the village and around us. There is no escape to think of." Lothar Ebersberg, assistant doctor in the 3rd Battalion of the Rainer of Salzburg, the 59th Infantry Regiment of the Imperial and Royal Army, is in charge. Army, takes care in the first days of September 1914 of the numerous wounded who drag themselves from the fighting near Uhnow to the Galician village -Poddubce. Ebersberg is disarmed by the Russian troops, captured and transported with the injured soldiers to Uhnow, about 70 kilometres north of Lemberg in today's Ukraine. At the beginning he still worked there in an Austrian field hospital taken over by the Russians, believing that the captivity would only be of short duration. "Around this time the value of so-called international agreements was still believed and we doctors were of the opinion that this situation would only last as long as the battle situation made it possible to exchange us according to the provisions of the Geneva Convention," Ebersberg noted in his memoirs after the war (the manuscript is in the possession of his son Horst Ebersberg). But it comes differently. On 15 September the Feldspital is demolished, the prisoners are transferred with 170 wounded to Lemberg.
After three weeks Ebersberg is transported with other captured doctors to Kiev, then direction Ural, over the mountains to Asia. Packed together in wagons, they continue east to Nikolsk-Ussurisk in the far east of Russia. About 200 officers - mainly Austrians, but also Germans - and crews are accommodated there in a camp. The officers enjoy certain privileges, are allowed to go to Nikolsk-Ussurisk with permits. Ebersberg uses these city visits, because in his head matures a thought - escape. He learns a few chunks of Chinese, collects provisions and equipment, borrows money, gets a compass and a spirit stove, but above all clothes. He wants to flee dressed as a Chinese. A cap to which he sews a braid, a jacket, wide trousers and panties - heels without heels, lined with beaten grass, the customary footwear. Ebersberg also finds an escape companion, a Dr. Meier from Vienna. But he has to fit because of a sore throat. The Viennese doctor Karl Kassowitz reports to Ebersberg. He wants to join in. On 19 December the time has come. The backpacks are packed, the disguise is put on, head and face are thoroughly shaved and tinted with ochre. When the air is clear, the two Austrians crawl through the front yard, make it into the ditch, crawl quietly past the guards, and smuggle themselves out of the camp. But suddenly two Russian guards. Russians and Austrians approach, hesitantly, slowly. The Russians ask if they had seen Tungus, an ethnic group living in this area. Ebersberg denies his bad Russian, so the guards are even more convinced that they have Chinese in front of them and let them go.
Ebersberg and Kassowitz set off on their way, Ebersberg determined the route with the help of an atlas he had stolen in Lemberg. Heading west into China, about 600 kilometres on foot. 35 kilometres are planned for the first stage, but after just a few kilometres Kassowitz has chafed his feet. At seven o'clock they set up camp, wearing sweaty clothes, the cold soil penetrates the bones - sleep is out of the question. In the evening the journey continues, on a wide road a Cossack suddenly stands opposite them. "A choking feeling creeps up on me, I feel how my heart begins to beat more violently. Just at the right moment I catch my braid and hang it over my left armpit to the front." The deception succeeds, the two refugees drag on. On the road for 24 hours, about 50 kilometres, no sleep, no food. They are at the end of their journey, stop for a rest, sleep, go on, rest at dawn, eat, sleep and decide to continue in the afternoon. They are ignored by several hikers, only an older, suspicious Chinese speaks to them. Ebersberg replies in Russian, reveals himself as a fled German prisoner of war, curses the Russians - and thus gains the sympathy of the Chinese. For a small fee he agrees to carry a rucksack and take them to the border. In the evening they reach the border, with the help of their companion they find shelter - and a new helper. A young Chinese with the name Kojuangfung - Ebersberg and Kassowitz call him, however, after a short time only Zankerl - promises to bring them to Beijing. Auf der Flucht, Echo-online

In an Austrian archive, more of Lothar is found: Kriegsbilder No 3, General von Gallwitz, einer der erfolgreichsten deutschen Heerführer. (PURL) So this is "Dr Ebersberg": 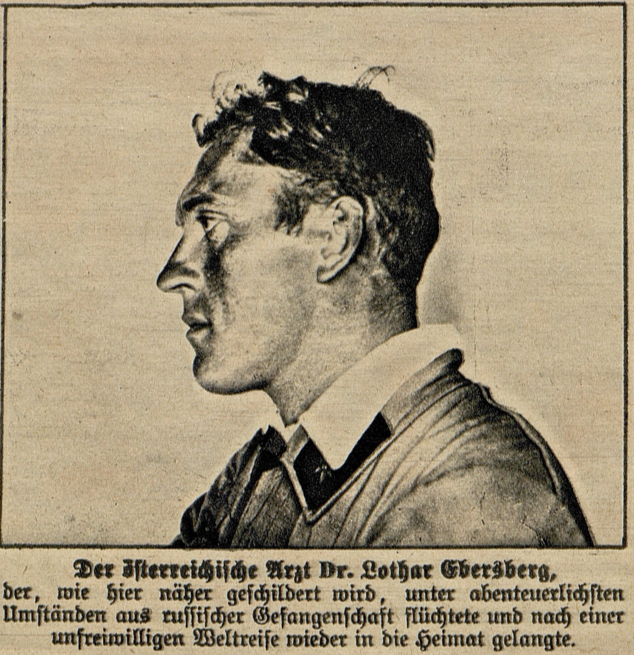 His other son, Lothar junior, also plays a role as "Little Lothar" in Riefenstahl's mountain move "White Ecstasy". His only film with Riefenstahl, perhaps.

So, in all likelihood it looks a bit less like nazi-connection but private friendship related to movie making, mountains and skiing.

More detail for the exact picture in question may be available behind an incredibly ugly paywall: Was in feinen Dahlemer Villen geschah (2005)

In summary, it looks as if Doctor Lothar Ebersberg and his wife Annette, who herself had no academic degree, were often guests at Riefenstahl's. Annette seems to have left not that much which google finds interesting. What is interesting however, is that Riefenstahl's memoirs have zero mentions of any Ebersberg, Annette or Lothar. The villa itself is just mentioned once and the event captured in pictures not at all.

I know. She was my dear grandmother.

She and Leni were merely friends.

The last OP is correct in his inferences, that she was Dr. Lothar Ebersberg's wife.

Not the answer you're looking for? Browse other questions tagged nazi-germany identification or ask your own question.

1
Did the Nazis doctor photos in order to make Hitler look as good as possible?

7
Was Jud Suss a veiled criticism of Hitler?
10
Considering what was known about Hitler in 1933, why would German bishops declare that Catholics could cooperate with the new State?
23
What was the planned line of succession for the Nazi Party in the event that Hitler died?
12
Were the events in Nemmersdorf a PR stunt of the Nazi propaganda?
7
Can anyone confirm the identity of these WWI uniforms?
11
Who is this, probably royal, teenager?
12
Did the Nazis identify as being Fascists? How exactly did they view themselves?
8
What regiment is this (~1826-1861) French cuirass cavalry uniform?