As newly independent countries after WWI, why didn't Baltic states have sovereignty dispute and war each other like other Eastern European countries?

After the WWI, many independent countries emerged and the borders between these countries, and also the existing Eastern European countries, were not clear, leading to territorial claims, disputes and large scale conflicts, including:

There were the Lithuanian Wars of Independence:

Newly independent countries East of the Baltic Sea
After the First World War the term "Baltic states" came to refer to countries by the Baltic Sea that had gained independence from Russia in its aftermath. As such it included not only former Baltic governorates, but also Latgale, Lithuania and Finland.[15] As World War I came to a close, Lithuania declared independence and Latvia formed a provisional government. Estonia had already obtained autonomy from tsarist Russia in 1917, but was subsequently occupied by the German Empire; they fought an independence war against Soviet Russia and Baltic nobility before gaining true independence from 1920 to 1939. Latvia and Lithuanians followed a similar process, until the Latvian War of Independence and Lithuanian Wars of Independence were extinguished in 1920.

Update after question was edited:

The two borders now in question were disputed as well. That means that historic Livland (Livonia) was settled by Estonians and Latvians who did try to wrest as much control over territory. The German solution for this dispute would have been the United Baltic Duchy with multiethnic population. But not only were those ideas and those who had them unpopular, the idea came also too late, as the independence movements were already fighting against the Germans, the Russians, the Poles and each other.

From Wikipedia War of Latvian Independence: 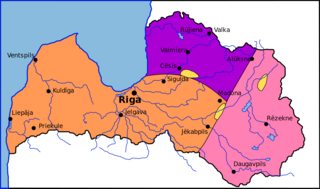 The British solution had something else on offer: Stephen Tallents helped to avert open warfare after independence, and he was instrumental in a treaty that partitioned for example Valka from Valga.

The border started to exist in 1918, when independence was declared by both states. There were some disputes on the exact location of the border but these were settled after a few years. These disputes related to places where the old Russian province borders did not follow the language distribution, and to railways.

Then it might be instructive to define what "dispute over sovereignty" actually means. All Baltic states might as well be described as suffering various degrees of civil war during the time…

Now we might still wonder why those conflicts and disputes between Baltic states appear to be relatively small. Border conflicts tend to be instigated by right wing politicians, nationalists and "patriots". But the population was quite war-weary and considered their chances in winning in violent confrontations weak at best. The reasoning in favour of an independent state had also to contend the extremely weak position an independent Latvia and Estonia had on the international scene

Only right wing extremists and students could be incited:

Once the Bolshevik forces had been expelled from Estonian territory, elections were held for an Estonian Constituent Assembly in April 1919. The results showed that the key issue for the majority of the electorate was land reform. The largest number of seats were won by the Social Democrats and Labour, parties who favoured swift and radical land reform – the immediate liquidation of the estates through division of the land. Without a just redistribution of land it was less likely that the common soldier at the front would have been motivated to risk his life for the Republic. (p10)

While the establishment of an independent Estonia was made possible by the profound changes in the international balance of power caused by the simultaneous collapse of Russia and Germany, Estonians were keenly aware that no state had been in favour of the formation of an independent Estonia. Thus they saw their own efforts and resolve as having been decisive. (p12)

Not the answer you're looking for? Browse other questions tagged europe world-war-one or ask your own question.

14
How did Churchill and Stalin intend to translate the percentages in the "Percentages agreement"?
4
Typology and the cause of difference between European medieval kingship?
49
How was Germany able to hold itself together, while Austria-Hungary could not?
4
Why were the continuity states of Imperial and Royal Austria-Hungary disunited, while the continuity states of Imperial Russia were united?
3
What is meant by "state people" in this context? (Governments of new Balkan states post-WWI)
6
Was Russia ready for amphibious invasion of Istanbul in 1914?
2
Were there any attempts at a federation or commonwealth to save Austria-Hungary from breaking up after ww1?
19
Have Germans expelled from Eastern Europe been re-enfranchised?
4
Why do Eastern European countries have the greatest female-to-male ratio?
0
How would an Allied promise to "supply" Romania sway that country?