Did the US quarter shrink in size?

I am confused by the size of a current US quarter. It is not a major problem, but it is baffling.

It is smaller than a shilling, yet 5 shillings make a crown and 4 quarters make a dollar —crowns were originally re-minted thallers/dollars/pesos de a ocho, so are all the same size (a Morgan dollar is 26.73 grams, a Maria Theresa thaller is 28 g and a crown is 28.27 grams etc).
A pre-1920 shilling (0.9) is 5.66 grams, while a silver quarter is 6.25 grams, so the latter ought to be bigger if both at 0.90-0.95 purity. I got these numbers off the web and the ratio is off for the dollars/quarter using both trade and Morgan dollars over a quarter, so a fourth of a US Trade dollar should be 6.8 grams.
I have never seen a silver US quarter, but the modern cupronickel one is not 20% larger than a shilling/old 5p coin, instead it is smaller and thinner. On the other hand, I cannot find any reference that states US quarters shrunk in size. 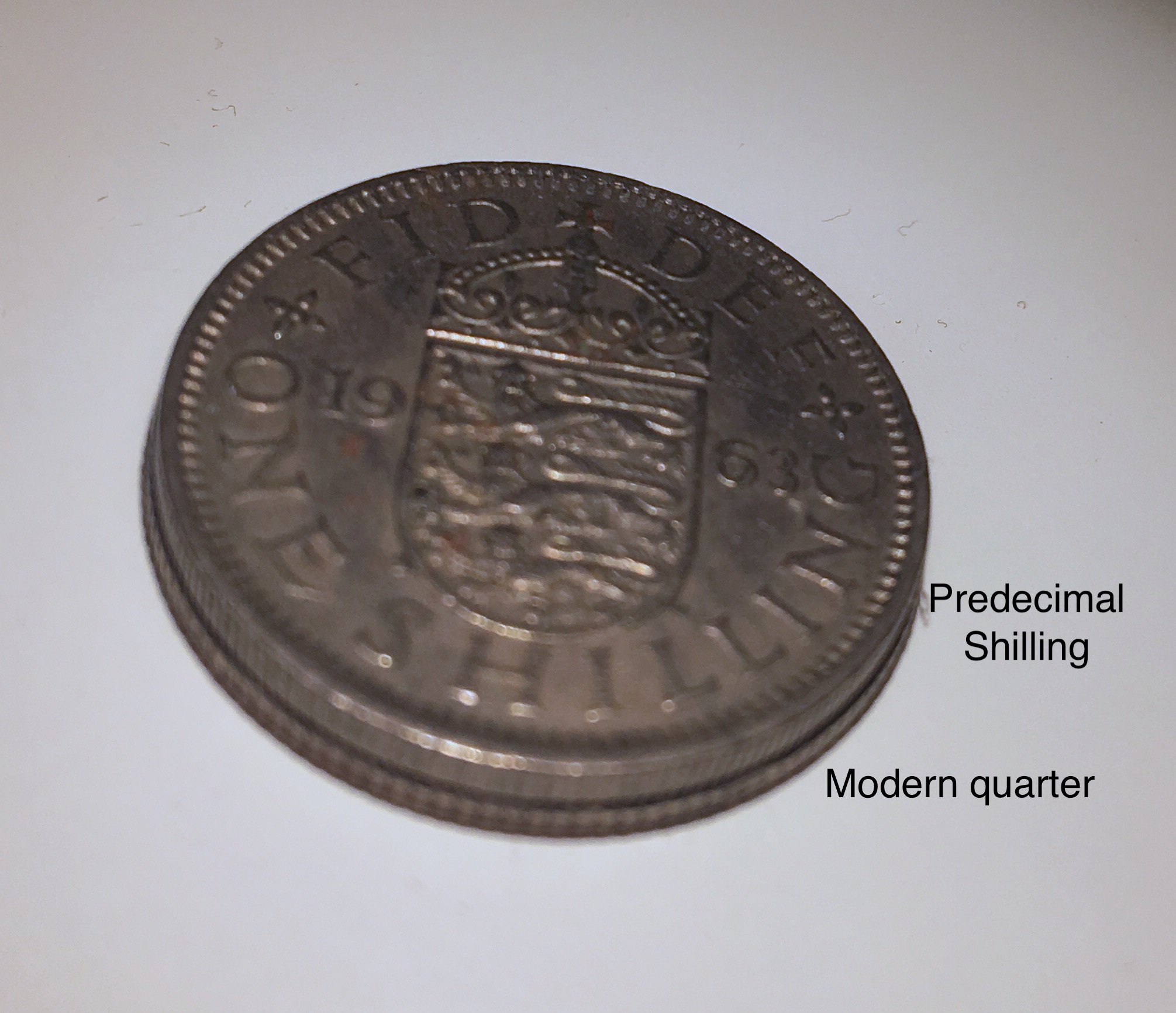 The risk of this system was that if the global price of silver increased relative to gold, silver coinage would flow out of the country because would be worth more melted and sold on the global market than as coinage. Gold rushes in California and Australia significantly increased the global supply of gold, creating precisely this scenario.

In response to the disappearance of silver coinage, Congress thus decided to change the size of the silver coins (5c to 50c) in 1853. But the silver dollar was left unchanged: the size change was a intended to be temporary measure, and it was felt important to send the signal that the currency still had inherent value through its silver content. In practice, the change was permanent and the silver dollars basically disappeared.

There was another slight change to the sizes of the coins again in 1873, and the silver dollar was discontinued at the same time. After the 1873 Act, a quarter weighed 96.45 grains or 6.25 grams.

The 1873 Act - more controversially - also removed the right of holders of silver bullion to have their silver turned to coins. This made it possible for silver coinage to have an intrinsic value lower than face value, pushing the US away from bimetallism and toward the gold standard. The Morgan Dollar was authorised five years later largely due to opposition to this policy: the Bland-Allison Act required that the government buy large amounts of silver to turn into silver dollars at the 1837 16:1 weight ratio.

The British history is less involved. From 1816, the weight of British silver coins was based on the assumption that 1 troy pound of sterling silver (92.5%) was worth 66 shillings. As a troy pound is about 373.24 grams, that gives you 5.66 grams for the shilling and 28.28 grams for the crown. As the equivalent value for a troy pound of gold was £46/14/6 (934.5 shillings), the implied ratio at that time was about 14.16:1. This significantly overvalued the silver.

I think a key point when you compare the two is that the amount of silver didn't matter, because the exchange rate was principally set based on the gold standard. After 1816 in the UK, and 1873 in the US, the melt value of silver coins could be - and often was - significantly below the face value. It should thus not be surprising that coins from different countries in this era might not have silver content in proportion to their relative value. After all, a modern quarter is about the same size as a modern UK 10p coin, but is not worth the same.

Sources: Wikipedia (particularly Silver Standard, Coinage Act of 1873, Great Recoinage of 1816), and the Guide Book of United States Coins ("Red Book") by RS Yeoman (I have the 2004 edition).

14
Why did the USA stay out of the League of Nations?
5
Did the American Founders Debate on the Relative Size of the Government?
8
What is the largest hoard of coins ever found?
9
When and why did round coins become a practical standard?
8
Why did the coins of England minted under Richard I and John bear the name of Henry?
7
When did Dei gratia/fidi defensor first appear on British coins?