Is the story about Mussolini and Oliver Hardy apocryphal?

There is a story that Mussolini wore bowler hats until someone told him that he looked like Oliver Hardy. Is this true? Is there any evidence for it or is it apocryphal?

The times I have seen the claim (once on a history blog, once when I was a kid in a horrible histories book), they have been totally unsourced. I know that Mussolini was a fan of the duo, and I know that their producer danced with Mussolini’s daughter at least once. And there are photos of young Mussolini in bowler hats, which is a style he appears to have dropped as he aged. I am hoping someone will have a specific reference or at least know where the claim originated.

The story isn't true. It most likely stems from an inaccurate account by the English writer A. N. Wilson. It is also possible that Wilson's version has been 'blended' with a piece of fiction by a Dutch writer, Dick Raaymakers.

There is also at least one other false 'version' of the 'Mussolini, Laurel & Hardy & bowler hat' story.

The source of this apocryphal story is most likely the English writer A. N. Wilson's biography of Hillaire Belloc. Alan Brien's Diary in the London Review of Books cites it as

a precise example of stretching the evidence, pushing the novelist’s licence to caricature beyond its legitimate limits, in non-fiction.

‘Mussolini had in fact modelled his style of dress on that of his favourite film stars, Laurel and Hardy, whose sartorial distinctiveness he regarded as the embodiment of trans-Atlantic chic. He only abandoned it when he was informed that Laurel and Hardy were generally appreciated, not as models of sophistication, but as clowns.’

Wilson, by a Lytton Stracheyish sleight-of-hand, has turned the story upside down for an easy laugh.

For evidence, he cites Denis Mack Smith’s Mussolini in which the author writes that Mussolini:

‘discarded his bowler hat when he noticed that in American comedy films (for which he had a passion and installed a projector) they were no longer worn except by his favourite stars, Laurel and Hardy.’

J. Kenneth Brody, in The avoidable war: Lord Cecil and the policy of principle, 1932-1935, also notes that Mussolini

gave up bowler hats when he noticed that in American movies, which he adored, only Laurel and Hardy seemed to wear them.

Also, it is easy to prove that Mussolini did not model his style of dress on Laurel and Hardy: Mussolini was already using a bowler hat before 1914 when he was editor of Avanti!. This is at least seven years before Laurel and Hardy even made their first film together, and at least 13 years before a bowler hat was worn in one of the comic duo's films (Laurel wears one in the 1927 short Duck Soup, but Hardy has a top hat). 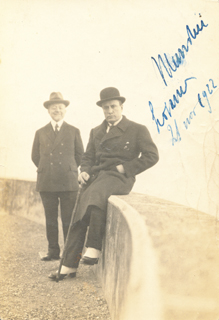 Mussolini and bowler hat in November 1922. Source: History for Sale 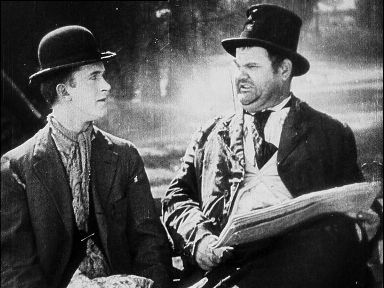 The first appearance of the bowler hat in a Laurel and Hardy film (Duck Soup, 1927). Source: The First Pairing of Laurel & Hardy: On the OTHER “Duck Soup”

Mussolini was somewhat notorious for his dress sense (or rather, lack of): for example, he often wore spats (which, again, were not copied from Laurel and Hardy) "long after the fashion had changed".

A. N. Wilson’s apophrycal story may have got mixed up with Dutch composer and essayist Dick Raaymakers’ fictitious 1984 story The Fall of Benito Mussolini: A Forgotten Hollywood Project of 1930, which was turned into a 1995 theatre production. Raaymakers’ story concerns an obscure director who tries to interest Hal Roach studios (makers of the Laurel & Hardy films) in a film on the fall of Mussolini using clips from the comic duo’s 1930 film Night Owls. This fictitious propaganda film contains the following:

In the Park scene at the beginning of Night Owls, it wouldn’t be Laurel and Hardy who would awaken on the bench but Stan Laurel and Mussolini, played by Oliver Hardy

The story was probably partly inspired by an attempt in 1937 by Mussolini’s son Vittorio to persuade Hal Roach to participate in a film project. The project never got off the ground as Vittorio’s visit quickly ran afoul of the Hollywood Anti-Nazi League, forcing Hal Roach to drop the idea.

continued to wear bowler hats until the admired Laurel and Hardy ceased to do so in the silent American films he enjoyed watching.

This is patently false; Laurel and Hardy wore bowler hats in their last film, Atoll K (aka Utopia, 1951), six years after Mussolini's death (and they stopped making silent films in the late 1920s).

Not the answer you're looking for? Browse other questions tagged italy fashion mussolini or ask your own question.

6
Is it true that Mussolini agreed to implement anti-Jewish laws in exchange for expulsion of Germans from Northern Italy?
13
Why was Villa Gaggia chosen as the setting for Hitler & Mussolini's July 1943 meeting?
13
Did Mussolini know that Hitler was going to attack Poland?
10
Lenin Jacket Picture: What's the story?
13
When Lenin met Mussolini, what was Mussolini's impression of Lenin?
2
Who did Mussolini meet after Hitler, on arrival to Germany after rescue?
1
Did Stukas support Schmalz Panzer corps and what about air interdiction?
1
What type of ancient Chinese headgear is this and what more do we know about it?