What does “setting up a trophy” mean in ancient Greece 5th century B.C.?

I'm reading Thucydides' The Peloponnesian War and time and a gain armies are said to "set up a trophy" on a site.

What does that mean? What was concretely done at the site where a trophy was set up? Was it a religious event, did it have any legal or military significance? They don't seem to always be set up after a decisive victory, but sometimes just before a fleet leaves an island, for example.

There are two kinds of τρόπαιον (tropaion) the battlefiled tropaion and the more permanent trophy, like an arch built to commemorate a military victory. The latter are then public buildings in a city.

The battle field tropaion of that period was

In the Greek city-states of the Archaic period, the tropaion would be set up on the battlefield itself, usually at the site of the "turning point" (Gk. tropê) at which the routed enemy's phalanx broke, turned and ran. It would be dressed in the typical hoplite panoply of the period, including (at different times), a helmet, cuirass (either of bronze or linen), and a number of shields, etc., would be piled about the base. It remained on the battlefield until the following season's campaigns (since battles were often fought in the same, relatively few plains amid Greece's numerous mountains), where it might be replaced with a new trophy.
In later eras in the Greek world, these tropaia might be vowed at the battle-site, but in fact erected at pan-Hellenic sanctuaries such as Olympia or Delphi to further increase the prestige of the victorious state.
The significance of the monument is a ritualistic notification of "victory" to the defeated enemies. Since warfare in the Greek world was largely a ritualistic affair in the archaic hoplite-age (see Hanson, The Western Way of War for further elaboration of this idea), the monument is used to reinforce the symbolic capital of the victory in the Greek community.
Ancient sources attest to the great deal of significance that early Greek cities placed upon symbols and ritual as linked to warfare – the story involving the bones of Orestes, for example, in Herodotus 1 which go beyond the ritualistic properties to even magically 'guaranteeing' the Spartan victory, displays the same sort of interest in objects and symbols of power as they relate to military success or failure.

These are now all vanished, by design:

Normally these trophies were quite crude in their construction, often consisting of nothing more than a post or pole with a set of armor affixed to it. One problem that presents itself when looking into this war monument is that there are no extant battlefield trophies. These were by convention intended to be temporary and were allowed to decay and vanish on their own. While we have no actual trophies at our disposal to view and touch the way one would an excavated set of armor or shard of pottery, we do have the image of a trophy as it appears on coins to provide us a glimpse into these somewhat obscure monuments.

Unlike the Panhellenic sanctuaries, at Athens the first monuments commemorating the victories of Marathon and Salamis were not dedications to Athena on the Acropolis but consisted of marble trophies erected on the battle field. It was normal practice in Greek warfare for the victorious army to erect a trophy at the spot where its phalanx had turned the enemy to rout; but these battle trophies were temporary affairs consisting of armor and weapons captured from the enemy and hung about a post or tree trunk. Quite different was the permanent memorial that the Athenians erected on the field at Marathon nearly thirty years after the victory. is took the form of a freestanding marble column of the Ionic order that probably supported a marble replica of a battle trophy, possibly decorated by a figure of Nike. Several unfluted drums and the monumental capital of this column were later built into a medieval tower in the northeastern part of the plain of Marathon, where they were seen and mentioned by various early travelers in the nineteenth century, but only received formal study by E. Vanderpool in 1965.

For better visibility, a Roman variant: 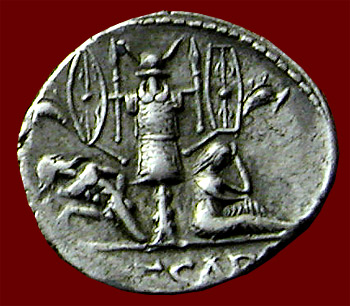 Not the answer you're looking for? Browse other questions tagged war ancient-greece or ask your own question.