Can anyone provide pictures or credible descriptions of clothing as a modest musician anywhere in Europe might have worn between 1500 and 1700? I realise that my question spans 200 years and many countries. Feel free to restrict it if you need. I have searched a lot of paintings by myself, but I suspect they tend to depict musicians in extremely fancy clothing.

If you can show that the examples below are not of rich musicians or that the clothing of musicians didn’t significantly differ from that of others, you are welcome to do so.

It seems easy to find examples of musicians painted by Dirk van Baburen 1622: 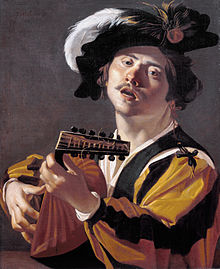 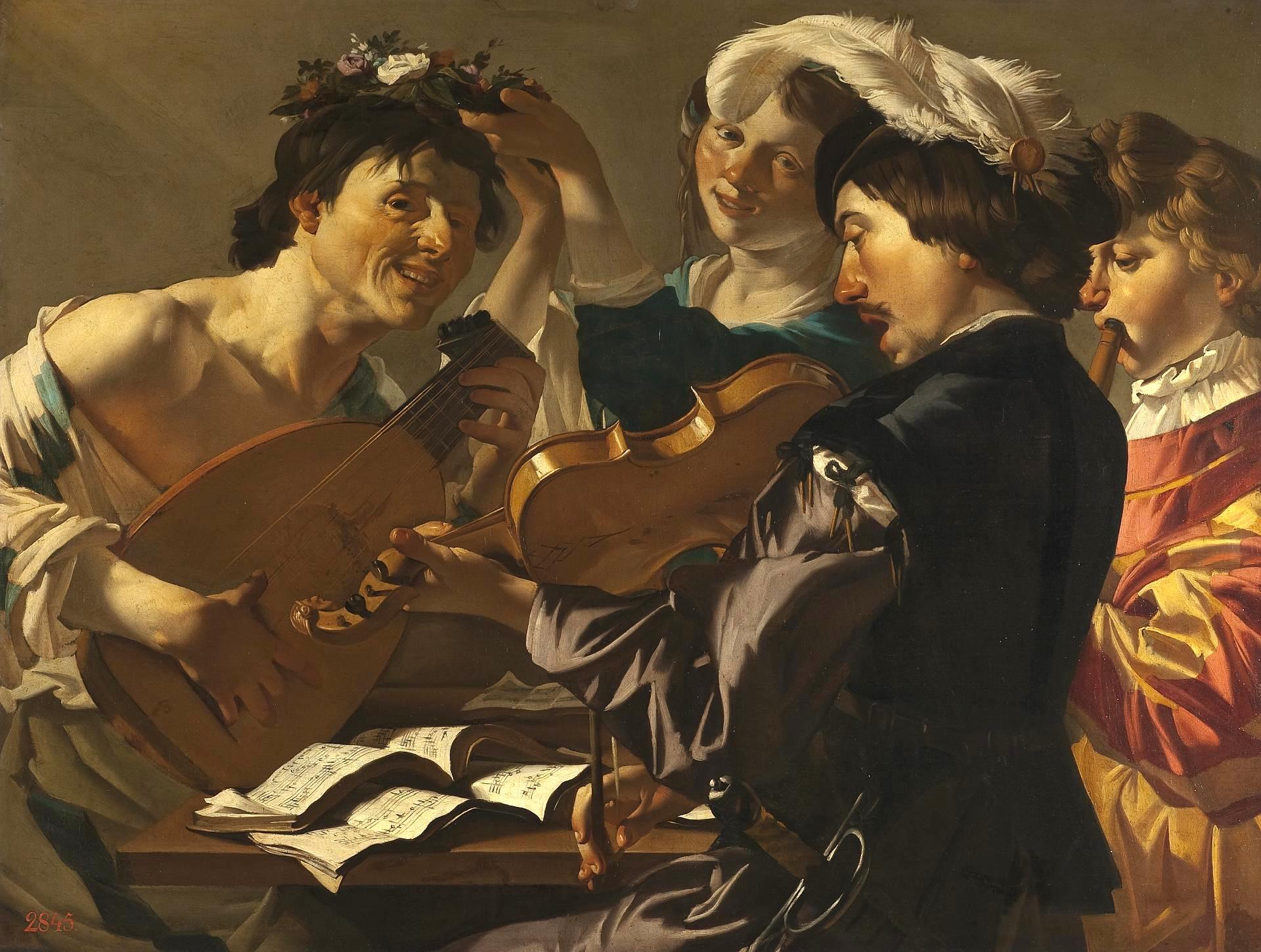 Unfortunately, they are not full body pictures and seem to my untrained eye to depict rich people. If the latter assumption is wrong, I will be delighted to know! To me such feathers and hats certainly look expensive.

Caravaggio 1596 also shows cloth that looks rich and luxurious to me. I assume such pigment was expensive, but I am just guessing: 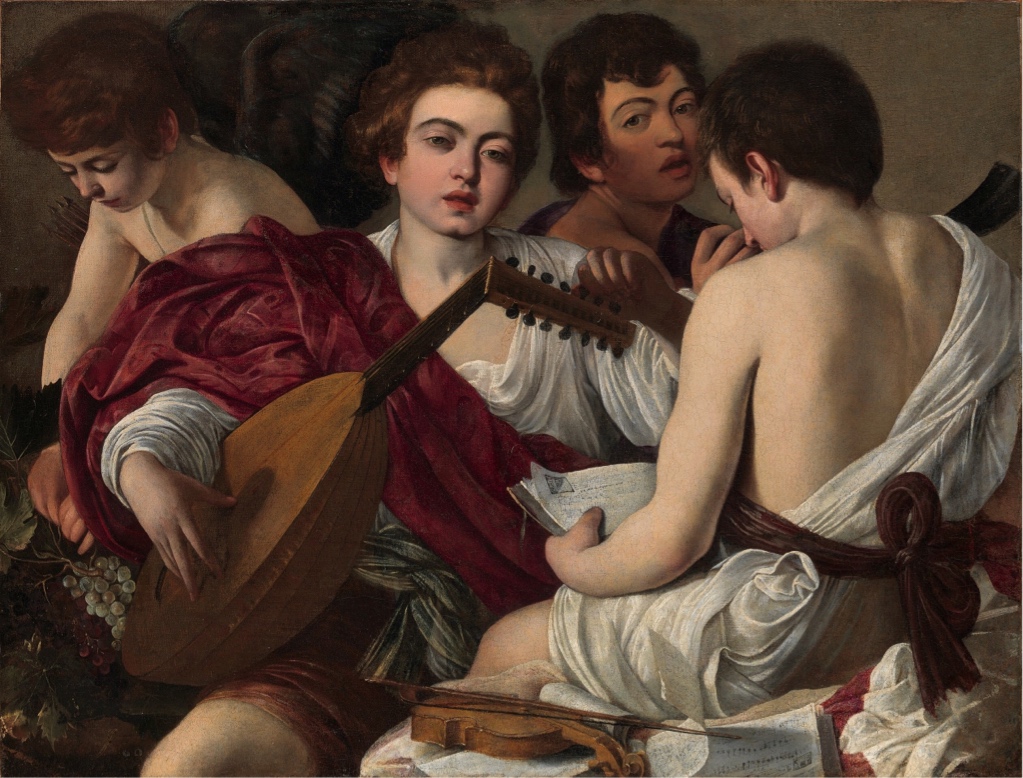 The only somewhat modest(?) picture that I could find was Dürer 1504: 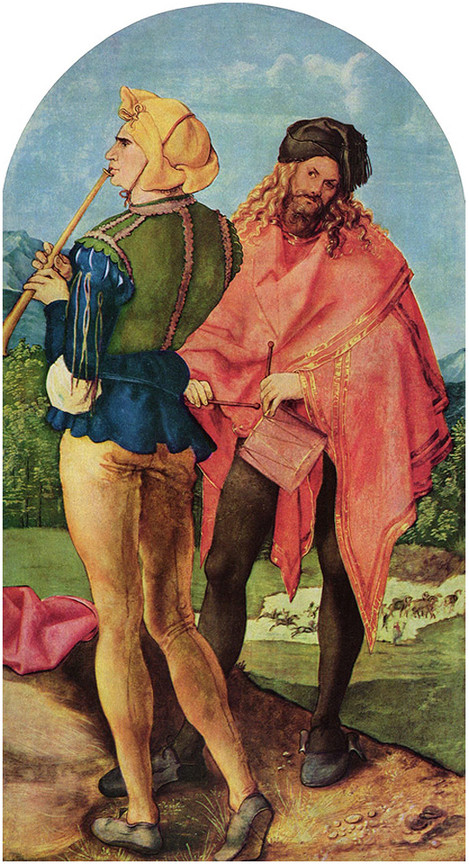 For genuinely poor musicians, you probably need to look at street musicians. As the The Cambridge History of Seventeenth-Century Music notes,

The relative wealth of musicians is hard to determine, partly because hard currency was not the most important economic measure in the period. Moreover the fortunes of individuals could fluctuate markedly...Some musicians died paupers. Others, however, left substantial estates...

This source goes on to give an idea of income compared to other occupations:

For London, Ian Spink has estimated that a rank-and-file court musician might expect to be paid the same as a better-off member of the clergy, a military officer, or someone in the liberal arts. Lesser musicians such as town waits were closer to shopkeepers or minor tradesmen in their income, while a street musician might be indistinguishable from a beggar.

Starting at the bottom end of the financial spectrum, the etching below by Jacques Bellange from Lorraine (c. 1575–1616) shows a beggar musician. 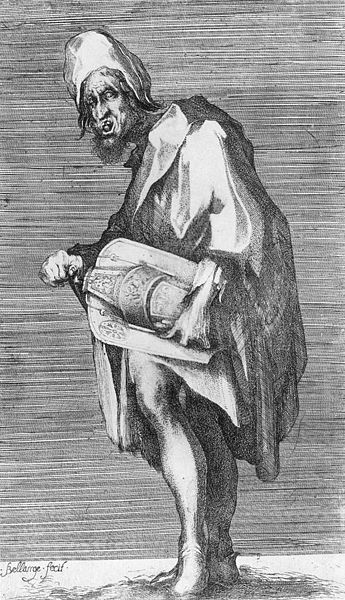 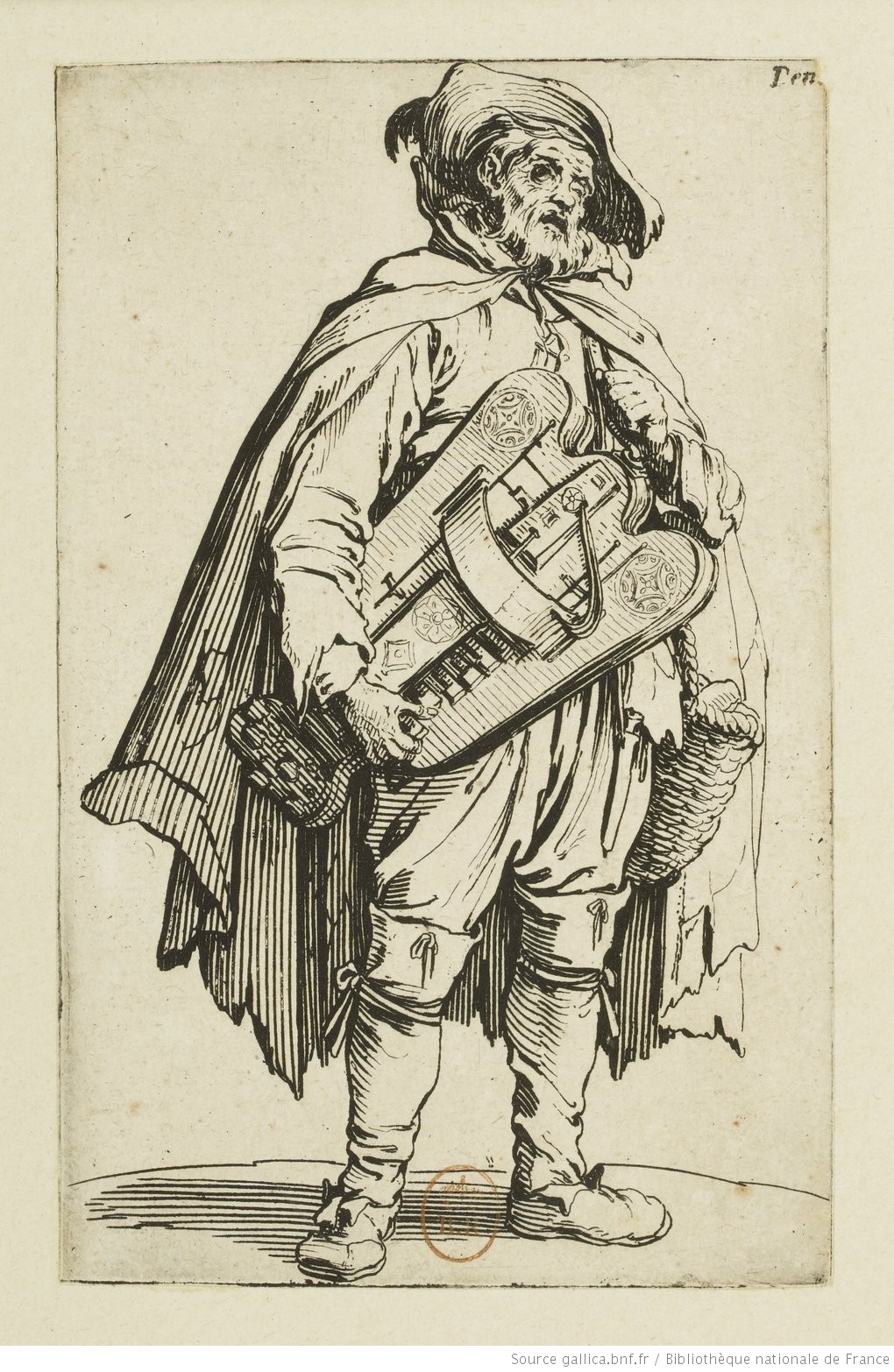 Street musicians were looked down upon and were sometimes prosecuted for vagrancy. London attracted large numbers of such vagrants, making the streets noisy places as musicians, ballad singers, street hawkers and others plied their trades, sometimes dishonestly (working with pickpockets) and sometimes prone to violence (many were armed). Scenes such as the one below (also by Jacques Bellange) wouldn't have helped their reputation. 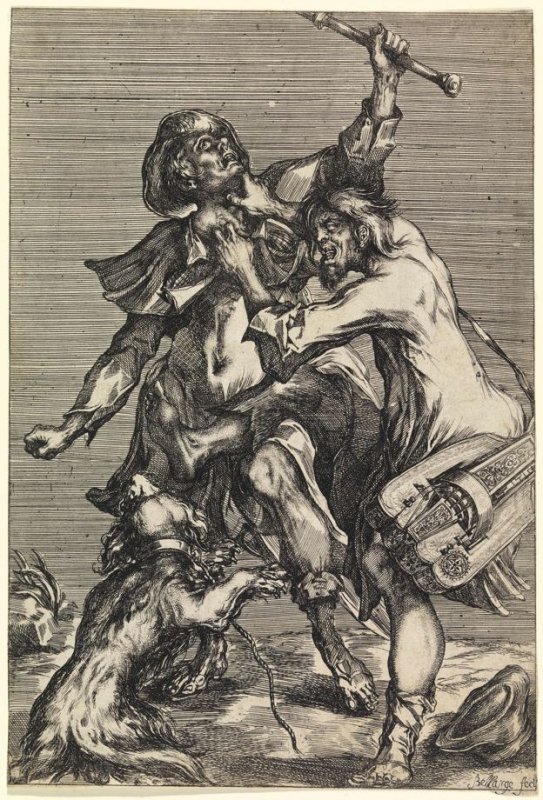 "A hurdy-gurdy player clutches at the throat of his angry ragged opponent. an agitated dog, claws exposed and unleashed in the foreground." Source: Fine Arts Museum of San Franciso. 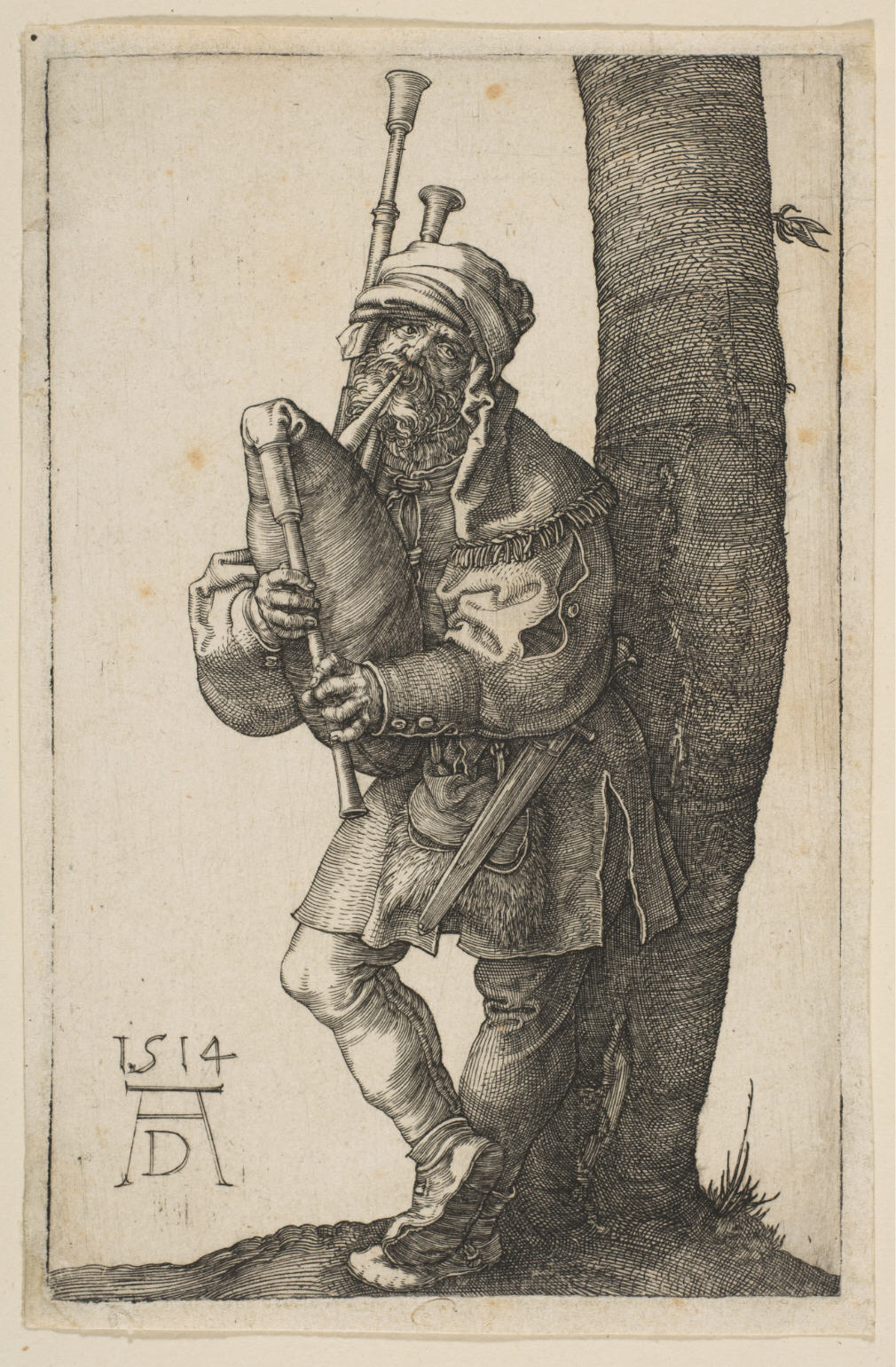 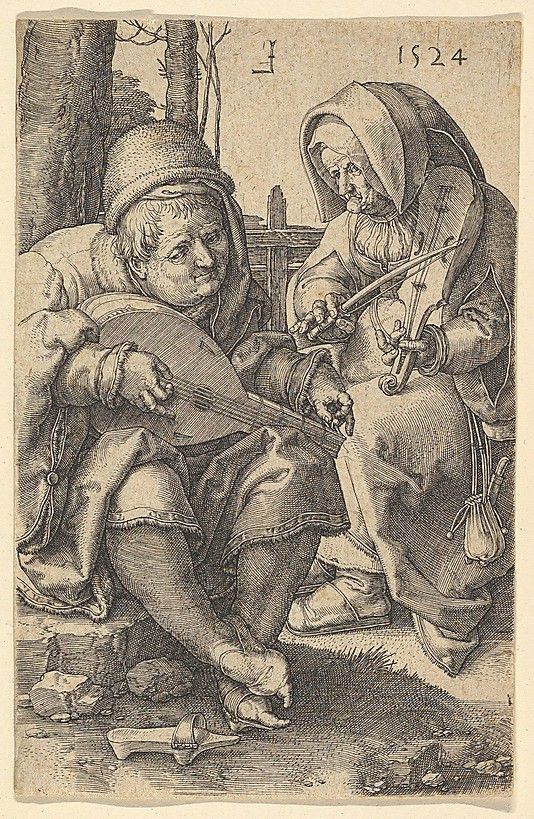 The Musicians, by Lucas van Leyden (1524). Source: The Paupers and Peasants of the Renaissance

The colours of poor people's clothes tended to be more muted than they are today, with yellow, brown and blue being more common than most. These were by no means the only colours used, though. The article Colors for Lower-Class Elizabethan Clothing has more on this.

The Flemish painter Pieter Brueghel the Younger's (1564 - 1638) picture below shows a better dressed musician playing for the Egg Dance in a peasant village. The Egg Dance was

a traditional Easter game involving the laying down of eggs on the ground and dancing among them whilst trying to break as few as possible...the pastime is associated with peasant villages of the 16th and 17th century... 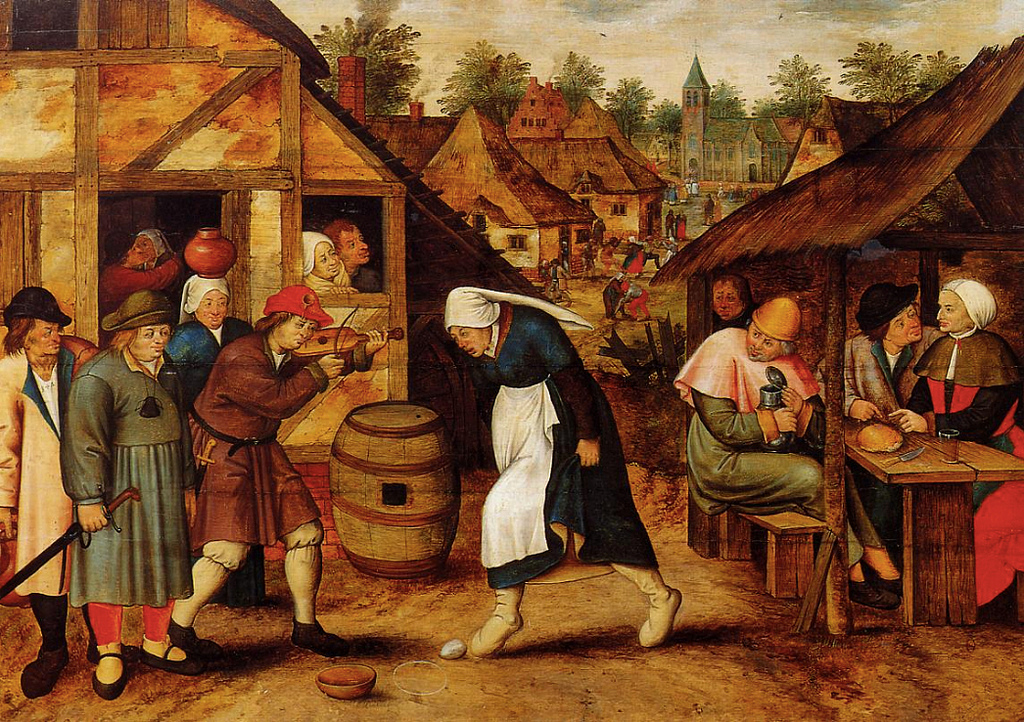 Another picture, this by Dutch painter Jan Steen (circa. 1626 - 1679), also features the Egg Dance and shows two musicians (bottom right). 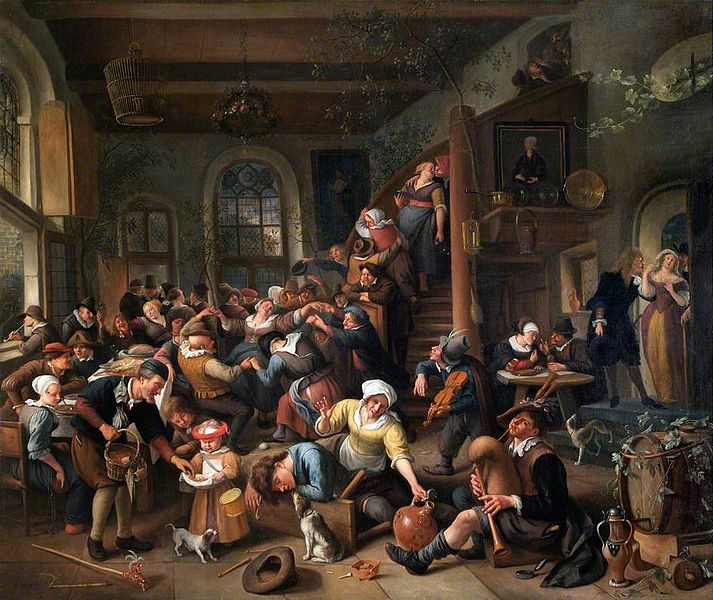 Musicians in Taverns, as in the picture above, were often employed by the Tavern owner and may thus have had a steady income, though probably not a very substantial one. Likewise, waits (bands of musicians in towns and cities) were salaried and often had clothing provided (so they may not qualify for your question). Among other responsibilities, they played at town feasts and fairs. More information and some pictures can be found on the Waits Website. It is also worth noting that, in Elizabethan England at least, fiddlers could earn well by playing at village feasts and fairs, but their fortunes could fluctuate and it was not uncommon for musicians to die as paupers.

Traditional Music and Dances in the Time of Vermeer

Music in the Elizabethan era

Until the time of Beethoven musicians had a low social status. They were basically servants. Like other servants, they were dressed up in fine livery while serving their masters. This is what you see in most of your pictures. When not serving they probably looked as in the Dürer picture. Or like this:

Not an aristocrat, but at best lower middle class.

Not the answer you're looking for? Browse other questions tagged clothing early-modern music or ask your own question.