How many javelins would a Thracian Peltast carry into battle?

According to the Wikipedia page on Thracian Peltasts, they carried several javelins with them. I am just wondering how many could they realistically carry into battle. Also, would they run back to their supplies to carry more? How would the battle play out for a peltast as the battle wore on?

On the number of javelins, the short (and safe) answer is at least two for those peltasts who used them – not all did, and weapons changed over time. Unfortunately, there do not seem to be any ancient written sources which give a number and, even if one source did, we could not assume that number to be true in all circumstances or in different centuries.

Although archaeology has provided new evidence, the ancient literary evidence

offers sparse details about the weapons, combat formations, tactics, and strategy of the Thracians...

The pictorial evidence shows that:

Peltasts are always illustrated with only two javelins, but it is clear from battle accounts that more were carried, the number depending on their length (between 1.1m and 2m)... 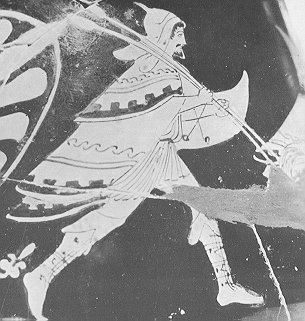 May have lacked shields, carried curved knives instead of swords, and carried a large bundle of smaller shorter javelins than the peltasts.

before continuing (citing John Lee, A Greek Army on the March: Soldiers and Survival in Xenophon's Anabasis)

but I see no reason to assume this was necessarily the case; Lee estimates that each javelin was roughly 1 kilogram, and three would have been the normal limit. This is more reasonable, as a peltast reasonably could have carried one javelin in his throwing hand and either held two or three more in his other hand (if his shield had an armband) or kept extras wedged between his arm and his shield. In any case, multiple javelins would have weighed 2 to 4 kilograms; the machaira was another 1.5 kilograms, bringing the total burden for weapons and shield to 5.5 kilograms (just over 12 pounds, with two javelins) or slightly more (depending on the number of javelins).

Fred Eugene Ray, Jr., in Land Battles in 5th Century BC Greece: A History and Analysis of 173 Engagements, states

Javelin heads could be either tanged (fitted into a notch in the shaft) or socketed (pulled over the end of the shaft). In contrast to contemporary war arrows, these were not barbed. It was much easier to withdraw an unbarbed point from the body of a fallen foe, an important feature in a weapon carried in very limited quantities (often no more than two at a time) and sometimes used hand to hand.

In summary, it is reasonable to conclude that these seemingly conflicting opinions may simply be a reflection of the presence of different types of peltasts in different time periods. Peltasts were primarily used as skirmishers or to pursue fleeing enemy troops, but they were also able to use their greater mobility to defeat heavily armed hoplites, especially on uneven terrain.

Not the answer you're looking for? Browse other questions tagged warfare ancient-greece weapons or ask your own question.

3
Nymphodorus of Syracuse
29
Why didn't Alexander invade India?
15
Mystery of the many-loaded muzzles
14
What is known about how many Ulfberht swords exist?
9
Why did Helots fight alongside Spartans?
11
How much gunpowder could the average Napoleonic ship of the line carry?
12
Why would a rifleman have his bayonet fixed to the rifle in a non-combat situation?
21
Did Henry V’s archers at Agincourt fight with no pants / breeches on because of dysentery?
7
What was the aftermath of a battle in the Middle Ages? How did wounded soldiers proceed?
7
What sort of maps did the ancient Greeks make and distribute?