Why wouldn't an ASDIC work immediately after a depth charge attack?

I'm reading about the WW2 North Atlantic submarine war. In particular about the anti-submarine weapons availbale to the allies.

This article includes a statement that I'm trying to understand.....

When a depth charge explodes it can take 15 minutes before the disturbance can settle down enough that sonar becomes effective.

What was the nature of the 'disturbance' that could effect sonar for 15 minutes? I assume it's a reference to some form of underwater echos and/or shockwaves, but if so why so long? I know that sound travels much faster and further in water than air, but does that not mean that any echos should die down more quickly?

Or maybe the ASDIC was very sensitive and needed re-calibration (or even repairs) after a nearby explosion?

Or is there some other phenomena that I've missed?

Your expectation "does that not mean that any echos should die down more quickly" is largely inaccurate for that portion of the explosive energy directed vertically, or near vertically.

Precisely because sound travels so much faster in water than air, and that water is much denser than air, the transmission coefficient from water to air for sound is very close to zero even at an incident angle of zero degrees (vertical).

Here:
- c is the speed of sound for the medium
- ρ is the density of the medium
- subscript l represents the second medium (air), no subscript the origin medium (water)

A similar analysis will show that a very small transmission coefficient also occurs with respect to the sea floor.

Therefore in the immediate vicinity of sub and destroyer/corvette, where the incident angle of the sound blast is very close to zero in respect to both sea surface and sea floor, the echo of the sound blast reverberates in a nearly vertical pattern until that echo slowly migrates off of the vertical or is absorbed by the water through heating.

Most of the Atlantic is between 3000 and 4000 metres deep, averaging about 3600 metres. This means that the echos of a depth charge explosion are racing back and forth between sea surface and seafloor in 2 -3 seconds each way. With near zero transmission to both air and bedrock, a loud reverberation would echo around the vicinity of the explosion, typically the immediate vicinity of both sub and hunter. Yelling out in a cave system with strong echos, and then waiting for enough silence to hear a pin drop, would be an analogous situation.

Typical frequency for sonar in WW2 was 20kHz to 30kHz. The wavelength for a 25kHz signal would be ~ 6 cm given the sea water properties above, so all features of sea surface or sea floor < ~3 cm would be invisible.

The claim is made in another answer:

For ASDIC to work best the water should be homogeneous, with laminar flow only.

While true, this is never the case. Rather there are always three thermoclines affecting the transmission, except in waters so shallow that one or more are squeezed out. 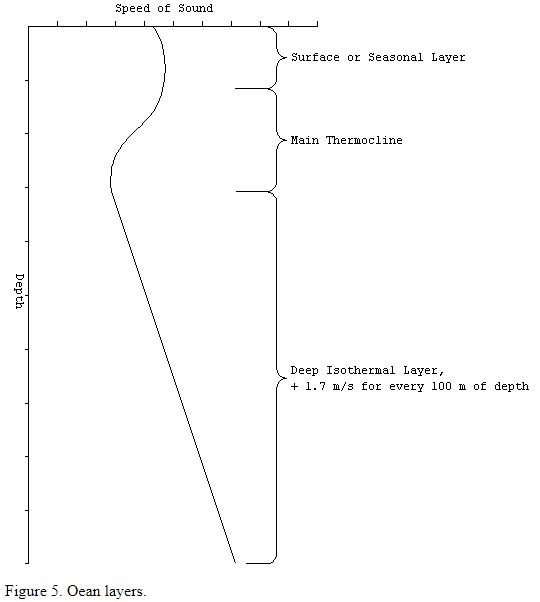 Therefore the notion that waiting 15 minutes or so for a return to homogeneity of the sea is absurd. What actually happens is that any great disturbance of the water will disturb the "lamination" of the ocean that facilitates the sonar shadow effect illustrated here, that occurs when a positive thermocline gradient closest to the surface lays above a negative one: 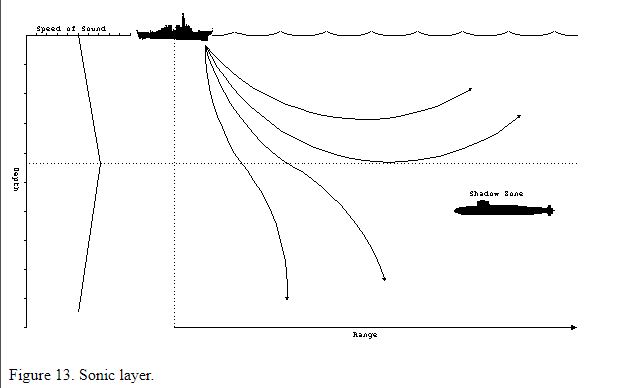 Other more complex propagation patterns must also be allowed for by the experienced sonar operator, as described in the reference.

An underwater explosion creates turbulence in the water, creates bubbles, and perhaps mixes waters of varying temperatures or salinities, all of which affect the refraction of sound in water. For ASDIC to work best the water should be homogeneous, with laminar flow only.

I think that the key to this is considering the reflected waves and their interactions with the environment and each other.

The initial explosion will send out shockwaves in all directions. These shockwaves will bounce off any surface, especially the sea floor and the surface with the air. Importantly, these reflected waves will also reflect as they hit any surface (for example, the initial reflection from the seabed will bounce up and reflect from the surface) and those reflections will do the same. As these surfaces are generally going to be irregular so the reflected shockwaves will very quickly become a jumble of noise.

The initial explosions are orders of magnitude stronger (i.e. louder) than the ASDIC sound waves, and although each reflection loses energy, it takes time for the reflections to lose sufficient energy that they become insignificant in comparison to the ASDIC signals.

Sonars (or ASDIC in British terminology) were relatively simple in WW2. Sound would be sent in one direction, it would propagate trough the water, and would bounce back from any underwater object in its path (submarine for example). Knowing the speed of sound in the water it was possible to roughly calculate range and bearing of that object. But if the object gets to close to the sonar, it could not detect it. The article about Hedgehog you posted explains that :

The system was developed to solve the problem of the target submarine disappearing from the attacking ship's ASDIC when the ship came within the sonar's minimum range. Due to the speed of sound in water, the time taken for the 'ping' echo to return to the attacking ship from the target submarine became too short to allow the human operator to distinguish the returning audible echo from that of the initial sound pulse emitted by the sonar – the so-called "instantaneous echo", where the output sound pulse and returning echo merge. This "blind spot" allowed the submarine to make evasive manoeuvres undetected while the ship was out of range for depth charge attack. Hence, the submarine was effectively invisible to the sonar as the ship came within the sonar's minimum range. The solution was a weapon mounted on the foredeck that discharged the projectiles up and over that carrying ship's bow, to land in the water some distance in front of the ship while the submarine was still outside the sonar's minimum range.

Depth charges on the other hand were more cumbersome weapons. As you can see from the link, they were usually dropped in the wake of the ship. This means that attacking ship had to cross over submarine, i.e. loose contact for some time. Unlike hedgehogs, depth charges would explode every time (at predetermined depth). Attacking ship would lay pattern of them, wait till they explode, get out of the minimum range and then try to reacquire target providing the cavitation has settled down.

Providing all necessary steps, the fact that sonars rarely worked at speeds above 15 kts and range under 300 yards, plus limitations of sending pings at intervals that lasted around 5 seconds in 5 degree arc (to allow sound to return back) , it could really last up to 15 minutes before you could start search again if first depth charge attack was unsuccessful.

The quote may be referring to the physical systems implementing ASDIC. Shock and vibration shielding are major issues in naval architecture. Insufficiently shock shielded systems may have required maintenance after being shocked, for example by being near a recently executed depth charge attack. At least some British commonwealth WWII vessels lacked full shock protection on their ASDIC systems from the shocks induced by their own depth charge attacks.

"KALGOORLIE" made an attack on a possible contact at 1808, and two minutes later "WARRNAMBOOL" had an echo on the bear­ing reported by "KALGOORLIE", range 700 yards. Four charges were dropped, the starboard thrower again misfiring. The concussion of the last charge put the Asdic set out of action. One valve had been jarred from its socket and the heterodyne condenser had moved from setting "E" to setting "B".

Not the answer you're looking for? Browse other questions tagged world-war-two submarine asdic or ask your own question.

24
Why didn't Germany attack Turkey during WW2?
11
In WW2, how long could a submarine stay submerged if it wasn't moving?
1
Did Japan ever attack Vladivostok in WW2? Why or why not?
11
Why didn't the discrepancy in the Kursk casualty ratio work against the Soviets?
85
Why did the British scuttle the u-boats surrendered after WWII?
2
Why didn't Japan attack communist China in WW2?
3
British ship movements immediately after the armistice of 22 June 1940
11
Why did Yamamoto reprimand Nagumo after Pearl Harbor?
4
What military power would ever pre-announce an attack to give the enemy time to work up a defense?