Was the option of setting up a Jewish state in defeated Nazi Germany ever considered?

Since there were a lot of Jews pre WW2 in Germany, and Germany was responsible for the many deaths of Jews during the Holocaust, it seems logical to suggest, that a new Jewish state should maybe be created in Germany. Arab leaders, like the house of Saud at the time seem to have suggested this specific solution (citation: The documentary The House of Saud).

Was something like that ever discussed? Did it gain any traction? Why / Why not?

It seems that at least some Western leaders have thought about it, but no such proposal came to the fore because Zionist and Jewish leaders were not interested at all.

According to Jonathan Frankel:

In London in the summer of 1941 to meet with Lord Moyne, the newly appointed secretary of state for the colonies, Ben-Gurion made the question of the millions of Jewish refugees the focus of his discussions. Lord Moyne suggested allotting the refugees a territory in East Prussia once the German were expelled in the wake of victory over Hitler. Ben-Gurion, arguing that, "the only way to get Jews to go [to East Prussia] would be with machine guns", insisted that the only real solution to the problem of the Jewish refugees was to bring them all to Palestine.

Indeed, the statement in the question that "there were a lot of Jews pre WW2 in Germany" isn't correct: about 500.000 Jews were living in Germany in 1933, which amounts to about 3% of worldwide Jewish population at the time, and most of them emigrated before 1939:

On the other hand, most Jewish leaders were already tied to Palestina (see Dan Lenski's answer).

As Evergalo says, Jewish leaders were not at all interested in this idea. Even if they had been (which makes no sense), such a hypothetical state would have been treated as an enemy by the Germans.

There was a common belief in Germany during the latter part of WWII that the Allied bombing was purely revenge for German treatment of the Jews (Source: Germany and the Second World War, volume IX/I, pp. 364-8). This was completely incorrect, but widely believed. Expelling the German population from a significant area of Germany and populating it with Jews would have confirmed that belief in the view of the Germans, making denazification more or less impossible.

There would also have been a continuous conflict, much like the historical Israel-Palestinian conflict, between the Jewish state and the Germans expelled from its territory. Those Germans would have seen an underground Nazi party as their saviours. Really, this wasn't a good idea at all.

The reason that the expulsions of Germans from the east didn't cause such a conflict was that the conflict would have been between German partisans and the Soviet bloc. The partisans would have faced the same fate as the Anti-communist resistance in Poland, but with no potential help from the west.

Did [the idea of setting up a Jewish state in defeated Nazi Germany] gain any traction? Why / Why not?

One of the reasons why this idea could not have gained much traction is because Palestine had already become a major center of Jewish population, society, and power by the time the Nazis came to power in Germany.

There was significant demographic momentum and political will to establish a Jewish state in Palestine before World War II and the Holocaust, and these only increased with the flood of survivors who wanted to get the hell out of Europe during and immediately after the war.

Per demographer Sergio DellaPergola (screenshotted from this Wikipedia article), the Jewish population of Palestine had reached about 175,000 in 1931, before the Nazi takeover: 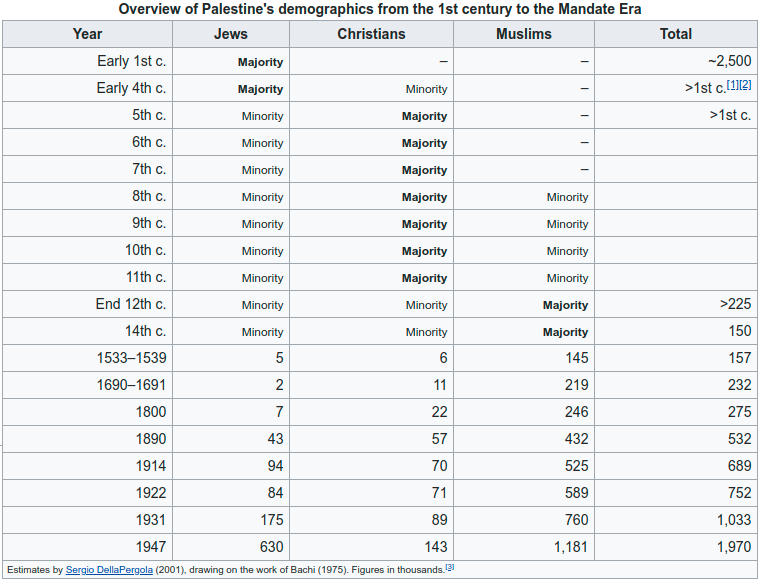 At the end of WW2, Tel Aviv (founded 1909) had an overwhelmingly Jewish population of about 200,000, the ancient port city of Haifa was almost 50% Jewish, and Mandate Palestine was dotted with kibbutzim and moshavim — many of them founded during a wave in the 1920s, but some older.

Basically all of the prominent political and military leaders of post-independence Israel had roots in Palestine extending well before WW2: David Ben-Gurion immigrated to Ottoman Palestine in 1906, Levi Eshkol immigrated in 1914, Moshe Dayan was born on a kibbutz in 1915, BenZion Netanyahu — father of Bibi — immigrated in 1920, Yitzhak Rabin was born in Jerusalem in 1922, Ariel Sharon was born on a moshav in 1928, Shimon Peres immigrated in 1934… and President Yitzhak Navon's ancestors had lived in Jerusalem for 2-300 hundred years before he was born there in 1921. I point all of these out as evidence that there was a well-established power structure and political establishment of Jews in Palestine before WW2. If there hadn't been, we would expect to see a lot more wartime and post-war immigrants to Israel among its early leaders… but we simply don't.

Obviously, no one was talking about establishing a Jewish state in Germany as Jews were being murdered en masse by Nazis. It's hard to figure out exactly how many Jewish refugees immigrated to Palestine during the war, but 100-200,000 seems like a good guess. The British Mandate severely restricted Jewish immigration starting in 1939, leading to armed rebellion by Jews in Palestine and organized, clandestine networks to bring Jews there.

Following the liberation of the Nazi death camps (1944-1945) and V-E Day (May 1945) still nobody was thiking about establishing a Jewish state in Germany. The western allies, to a large extent, were consumed with finishing off the war in the Pacific, and confronting Soviet expansion. Many survivors of the Holocaust returned to their homes in Eastern Europe, but were soon confronted with renewed violence at the hands of their erstwhile neighbors; this was particularly severe in Poland, culminating in the 1946 Kielce pogrom in which over 40 Jews were killed. After these events, Jewish survivors felt unsafe throughout Europe, and immigration to Palestine accelerated, aided by the clandestine Bricha movement which brought around 250,000 Holocaust survivors to Palestine in 1946-48.

So, to summarize, no one with a significant stake in the outcome or political clout considered setting up a Jewish state in defeated Nazi Germany because…

This is more a comment, but the question is vague and it's hard to discuss things which did not happen.

Such a state built on grief and revenge would have been incredibly weak and would have soon fallen prey to the Soviet Union. The scenario is similar to the Morgenthau plan which was already dismissed in 1944 because of this.

In contrary, the Western Allies needed a strong, heavily millitarized front state against communism. That was the motivation to rebuild West Germany as quick as possible, promote the local weapons industry and make it join the Western Allies as quickly as 1952.

The Soviet Union mirrored the move and ended their revenge politics on East Germany shortly after the war for the very same reason. They also needed a strong front state.

Not the answer you're looking for? Browse other questions tagged world-war-two nazi-germany israel or ask your own question.

10
Did Jewish families feel Nazi oppression was exceptional?
3
How influential was the Jewish boycott against Nazi Germany?
4
Why did Franklin Roosevelt promote Nazi sympathizer/eugenicist Frederick Osborn to high levels of office?
2
What was the area of Nazi Germany at its height?
11
Synagogue Scene in Der Ewige Jude: Looking for more information
0
Did anyone ever escape Nazi Germany through KdF trips?