How did messages get back and forth between ship and shore during the Battle of Cherbourg?

In volume 3 of Shebly Foote's book on the American Civil war, he mentions that once out to sea, Winslow got a message from France about Semmes's intentions. Does that mean there were boats going back and forth from ship to shore before the battle? I know there were some Yachts near the battle so they could watch. Would they have been the source of communication?

I'm confused by the phrase "once out to sea," and I don't know what Semmes' intentions were, other than to fight, but I suspect Winslow received the message on shore, after taking a boat to shore from his ship the Kearsarge.

According to the Kearsarge's logbook, Winslow sent a boat ashore but the boat was not allowed to land; a second boat with a more senior officer was permitted to land (p.309). On the 15th, Winslow "went ashore... himself to find out how things stand" (p.310) and returned with news that Alabama was planning to fight. The author of the logbook reports that Winslow "had received an abstract of a letter sent by Capt Semmes to the Confederate Agent" stating he planned to fight ("if the Kearsarge would wait for him he would not detain her but a short time," as the logbook's author put it).

On the 19th, Kearsarge saw Alabama leaving port; both ships sailed out to international waters (to ensure the fight didn't happen in French waters, Alabama was escorted by the French ship Couronne) and battled for about an hour.

After Alabama was sunk, Semmes escaped aboard an English yacht, the Deerhound, which had putatively sailed out to watch the battle but turned out to be an accomplice of Semmes that spirited away Semmes and 40 of his officers and crew, preventing Winslow from taking them prisoner.

I don't know what was used in this particular case, but I can tell you what was available at that time. Besides a courier sent by boat.

a) on small distance: flag communication (a person with two flags in his hands, see Flag semaphore. Used on short distances.

c) Communication with special lights: a searchlight specially constructed so that you can dim it or open quickly with a kind of the blind in front of it. Morse code or some other similar code can be used. Advantages: it is more secure, because you direct your searchlight narrow beam at the recipient. Works especially well when it is dark. (I don't know English name of this system, in Russian it is called "ratier", probably after the name of the inventor.) The range is limited only by the horizon, but you can place the searchlight high, for example on a top, to achieve quite a long distance. This system has the longest range of all optical systems. 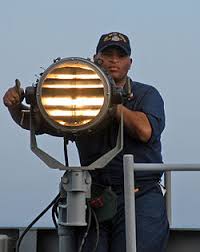 To increase the range, sometimes a signal was transmitted through a chain of ships, two nearby ships or boats within the range of any of the previously described system.

Remark. A searchlight does not necessarily use electricity. Lighthouses exist since very ancient times, but I don't know whether non-electric "ratiers" were ever used.

Not the answer you're looking for? Browse other questions tagged naval american-civil-war or ask your own question.

4
How did Farragut know he could get his fleet through the Confederate line of "torpedos" at Mobile Bay?
11
How did galleys battle?
15
How much did a ship cost in Ancient Greece?
2
What were the casualties and ship damage on each side of the Battle of Plum Point Bend, Tennessee?
6
An American Civil War battle where a general was ordered to advance to a certain point and wait . . . so waiting was all he did?
6
How did the design of the hull differ between an Indiaman and a frigate?
43
In the Battle of the Coral Sea, how could two Japanese scouts grossly mis-identify two American ships?
10
What did the Baltic Fleet do in Reval in 1904 and when was it there?