Why does the CIA report on the assassination of Reinhard Heydrich refer to it as “Operation Salmon” rather than “Operation Anthropoid”? 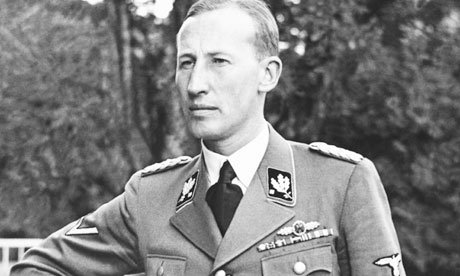 I have been researching Operation Anthropoid (the assassination of SS-Gruppenführer Reinhard Heydrich on 27 May 1942 in Prague, Czechoslovakia by Czech operatives Jozef Gabčík and Jan Kubiš with British assistance from SOE). All of the reference material I have found to date (some listed below) indicate the Czechs’ mission was called Operation Anthropoid (as I would expect) - except one.

The CIA's Secret report (declassified September 1993) on The Assassination of Reinhard Heydrich refers to this as Operation Salmon (both in the sub-title and in one footnote). In no place in this report is the name Anthropoid found.

Was Anthropoid part of a larger operation (Salmon), or vice-versa? I have not found any references to this effect anywhere. Neither have I been able to find any other source calling this mission Operation Salmon. Why does the CIA report indicate Salmon as this operation's name?

The only reference I can find to an operation called Salmon within the context of WWII is this codename reference to a 1943 British and US operation against U-boats operating in the North Atlantic. Additional Google searches have yielded no other Operation Salmon (during WWII).

As the author of the CIA article, R. C. Jaggers, does not cite any sources, it is difficult to establish with certainty why he used the name 'Operation Salmon'.

The most likely reason may be that Operation Salmon was an earlier designation for Operation Anthropoid (which raises the question as to why he preferred one over the other), but - amidst a fair quantity of literature - there is only one clear reference to this. Therefore, two other possible reasons cannot be entirely discounted, namely that Jaggers used bad or misleading sources, or he did not know the name of the operation and thus invented one.

'Salmon' as an earlier name

It is not unknown for the names of operations to be changed so it is possible that 'Salmon' was the original name for what later became known as 'Anthropoid'.

The only reference I've found for this is an article by the journalist Gian Paolo Pellizzaro on an Italian website Europa Orientale. Unfortunately, there is no clear citation, though some sources are given in the main body of the article. Google translates the relevant section as (my highlighting):

Anthropoid's initial planning was developed by the 2nd Department of the Czechoslovak Defense Ministry in exile, in collaboration with Baker Street specialists (named after the Special Operations Executive headquarters) and the Intelligence Service. The original name assigned to the operation was Salmon and as a date to carry out the assassination of Heydrich it was initially thought up to October 28, 1941, the 23rd anniversary of the Czechoslovak independence. But something went wrong and the plan was postponed ...

Pellizzaro's article does not seem to contain any obvious errors and that 'something went wrong' is corroborated by Michal Burian (2002) in Assassination — Operation Arthropoid, 1941–1942. The drop into Czechoslovakia was originally scheduled between 7 and 10 October 1941 but had to be postponed when one of the men selected for the mission, Karel Svoboda, was injured in training.

Pellizzaro's source for 'Salmon' may be one of two books mentioned in the text shortly before he mentions 'Salmon'. One of these is the Diaries of Sir Robert Bruce Lockhart, but very limited searching is allowed on Google books.

The other possibility is The Unseen War in Europe by John H. Waller. This is also hard to search but, interestingly, the index gives Salmon, Operation, 234 while another page mentions Anthropoid Team, 234-35. Not definite corroboration, but interesting.

If Salmon was indeed an earlier name, why did Jaggers use it instead of Anthropoid? This probably can't be known for sure without asking him, but there are a number of possibilities:

(1) he didn't know Anthropoid was the name finally settled on,

(2) he felt it sounded better in an article which clearly has one eye on 'entertainment' (see below), and / or that Anthropoid might have some of his readers reaching for a dictionary,

(3) 'tradecraft' (as mentioned by NonCreature0714) in his comment, perhaps with particular reference Churchill's instruction on using names "which do not suggest the character of the operation" or

(4) a careless error - there are lots of them in the article (see below) so this may well be the explanation.

On the second possibility, Marakai's answer has already noted the numerous and obvious errors made by Jaggers. Whether these came from Frantisek Moravec is, though, unclear at best. Moravec's book, Master of Spies, was not published until 1975 while Jaggers' article is dated 1960. The book was in progress when Moravec died, and was completed by his son. Also, some of Jaggers' biggest errors (date of Heydrich's death, the ages of Gabcik and Kubis) are not in the book.

According to the son (in the foreword to the book), Moravec (who was deeply involved in Operation Anthropoid) started making notes on his experiences (in Czech) shortly after he arrived in the US in 1948; he also made recordings and wrote various articles during his time working at the Pentagon. These were used to complete the book.

It is therefore possible that Jaggers somehow had access to Moravec or to something he had written in the 1950s. If Jaggers knew that Moravec was at the Pentagon, it would have been natural to try to consult him given the subject material. Moravec's son might have edited out errors in his father's material before publishing the book, and this could explain why some of the errors in Jaggers' article do not appear in Moravec's book.

The final possibility is that Jaggers, for one reason or another, simply made up the name 'Salmon', just as he made up the dialogues. At this point, it is worth taking a look at where Jaggers' artcle apeared, namely Studies in Intelligence: The IC’s Journal for the Intelligence Professional (vol 4).

This journal contains a number of articles where authors seem intent on displaying literary pretensions by using a writing style clearly not suited for a straightforward report. One article in volume 4 (The Defections of Dr. John) begins with:

Rain streaked the streets of Berlin, splashed on darkened houses, glistened in the light from an east-west border check point. A sedan rolled up, its tires singing on the wet pavement.

Clearly, imagined situations were OK with the editorial board. Perhaps this was because of the $500 prize on offer for the best article, one of the two criteria being "literary qualities". Thus, it is possible that, not knowing the official name 'Operation Anthropoid', Jaggers simply made it up (as he did the dialogues, though these may also have come from or been inspired by conversations with Moravec - assuming Jaggers even met him). It is worth noting that some details on Operation Anthropoid were still classified until around 1995; if Jaggers was junior at the CIA, he may not have had access to such classified material.

Interestingly, Moravec does not reveal the name 'Operation Anthropoid' in his 1975 book (though he must have known it given his role in selecting and instructing Kubis and Gabcek).

Curiously, after a bit of research I found this - a comment on the Amazon Kindle entry for the "book" The Assassination of Reinhard Heydrich Kindle Edition

Make of it what you will, but possibly it is simply a CIA screw up, or at the very least by its author R.C.Jaggers.

The commenter goes by the handle of Kallisto and writes:

First of all, you can get this document free of charge on the C.I.A. website. But why bother? It is a mind-boggling puzzle why this mess of false information was even written, let alone published.

Nothing in it - not even the DATES of the assassination and Heydrich's death! - are correct. It says the assassination took place on the 29th of May and that Heydrich died on the 6th of June. Wrong: the correct dates are May 27th and June 4th. (Mind you, this was written cca 1960, so the dates were available in any encyclopedia.)

The same goes for the date of the parachute drop (it happened in December 1941, not in April 1942), the personal details of the assassins - and so on and so forth.

Admittedly, some of the data are hilarious (the operation is called "Salmon" instead of "Anthropoid") [emphasis mine], but one can find worthier types of amusement.

The document seems to rely heavily on Moravec's book Master of Spies (or the material included in the latter, anyway), witness some of the mistakes, which replicate exactly those in Moravec's book, going as far as relating private conversations that the author clearly could not have witnessed. It is all incredibly childish and amateurish, especially considering it was made for the C.I.A.

The most alluring thing about this puzzling document is wondering about its purpose (this was supposedly a "secret" document up to 1993 when it was released) - and about the quality of C.I.A.'s "intelligence" in general if it employed personnel like the author of this oddity.

Zero stars for content, eleven stars for entertainment value - but only if you're familiar with the actual story.

P.S. If you want a good laugh, be sure to read the same author's review of Burgess' book "Seven Men at Daybreak". https://www.cia.gov/library/center-for-the-study-of-intelligence/kent-csi/vol5no3/html/v05i3a06p_0001.htm

If you are familiar with the actual story, Jaggers' badmouthing of Burgess' book will have you in stitches.

It goes without saying that simply because of the source my answer has huge disclaimers and caveats - but in light of what you found, namely that there simply is nothing else that links the name "Salmon" with the assassination of Heydrich, it seems we're talking about a case of bad intelligence and historical research on the side of the CIA.

EDIT: I just looked the CIA review of the mentioned book Seven Men at Daybreak, which indeed the same R.C.Jaggers savages. Seeing as that book is otherwise reviewed and rated as an excellent account of the Heydrich assassination, it adds fodder to the thesis that this "Jaggers" may simply be a vindictive, clueless hack, yet one employed by the CIA.

The "CIA's secret report" by R. C. Jaggers reads like a "as told by" version of some primary document originating outside the CIA. The CIA of course did not exist in 1942, and its predecessor, the OSS, had nothing to do with the operation. So this report might be a version of an account appearing in the Czech press, or a memoir by a Czech official of some sort.

The quotations of direct dialog such as

They glanced at each other. "No," said Gabcik. "We want to do it." Kubis just nodded.

So, I suppose, it was written by a Czech, who probably didn't know or care what codename SOE used for the operation. Possibly "Operation Salmon" is what the Czechs called it?

Not the answer you're looking for? Browse other questions tagged world-war-two espionage assassination czechoslovakia cia or ask your own question.

7
What were the six Mubarak assassination attempts?
27
Was there an assassination attempt against Xerxes in the battle of Thermopylae?
22
Was the assassination of Franz Ferdinand in 1914 captured on film?
9
What documented criteria (if any) did the CIA use to determine targets for political assassination during the Cold War?
8
Is there evidence to suggest the CIA didn't want Reagan to end the Cold War?
9
What transit restrictions were in place in Occupied Germany limiting military and civilian movement between the four occupation zones?
4
What was the purpose of Lt. Gen. Frank M. Andrews' flight when he was killed in the Iceland crash on May 3, 1943?
2
How many crew for the LT vz 38?