Do we have any authentic Native American flute music from the 18th century or earlier?

Just wondering if any actual music from Native Americans was recorded (written record, transcribed to some kind of sheet music) by Europeans, in the 18th century or earlier. I'm especially interested in flute music.

They did have bone flutes for a long, long time, some going back 60,000 years. Source

If you try to google for this, it seems all the results are just modern recordings, impossible to tell if it was really an original song, or if it was contemporary in the "style" of Native Americans that Hollywood has embued. This is why I asked for 18th century recordings or earlier, because I figure that 19th and 20th century, by then a lot of European style music could very well have influenced things.

No, the Europeans did not make sound recordings of Native American flute music (nor did anyone else, of any other sounds, for that matter) in the 18th century or earlier. Sound recording devices were not invented until the phonautograph in 1857 (France) followed by the phonograph in 1877 (USA). Thus, no sound recordings of any kind were made prior to the middle of the 19th century.

It is not well known how the design of the Native American flute developed before 1823.

So Native American flutes made since 1823 may not be crafted in the same fashion or with the same materials as those made in earlier centuries, making it difficult to know if the same sounds and tonal qualities and ranges of those flutes of earlier centuries can be reproduced with fidelity.

The Music section of that Native American flute article contains this information (which also indicates a reproduction of the styles and not necessarily the authenticity of the recordings as indicated in the Question).

These recordings capture traditional styles of playing the instrument in a sampling of indigenous cultures and settings in which the instrument was used.

However, the legal and ethical issues surrounding access to these early recordings are complex. Because of incidents of misappropriation of ethnographic materials recorded within their territories, Indigenous communities today claim a say over whether, how and on what terms elements of their intangible cultural heritage are studied, recorded, re-used and represented by researchers, museums, commercial interests and others.

It also says this:

During the period 1930–1960, few people were playing the Native American flute. However, a few recordings of flute playing during this period are commercially available. One such recording is by Belo Cozad, a Kiowa flute player who made recordings for the U. S. Library of Congress in 1941.

If Transcriptions are acceptable, I found Membertou's Three Songs - Sheet Music for Native American Flute which includes this information:

Marc Lescarbot (1570-1641) provided us with the oldest existing transcriptions of a songs from the Americas — three songs by Henri Membertou (-1611), sakmow (grand chief) of the Micmac First Nations tribe.

Lescarbot was a French lawyer with a passion for exploration and adventure. He readily accepted an assignment for a client in the Canadian Maritime Provinces, and arrived in May of 1606 ([Reid 2010]). He was based in Port Royal, present-day Nova Scotia until the summer of 1607 and took an interest in the lives of the region's native peoples. He became keenly aware of the tension between colonization and the desire for quick profits versus the realities of harvesting a colony's natural resources in a responsible manner — sentiments he published in 1609 in his Histoire de la Nouvelle-France ([Lescarbot 1609]).

Sometime during Lescarbot's stay in North America, he transcribed three songs of the Micmac (Souriquois) healer and chief Henri Membertou.

Here is a sample: 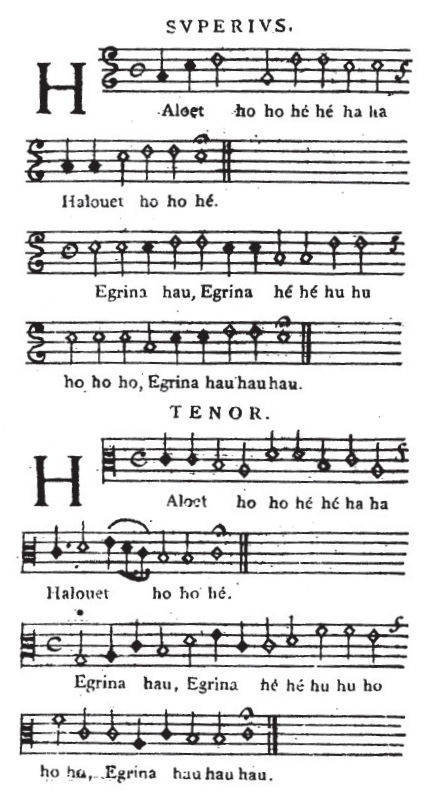 Also, I found Death Song of the Cherokee Indians which is dated back to 1760. This information is found on the linked page:

In the 18th century, F. W. Marpurg, the German music historian, published Remarks on Three Songs of the Iroquois (Berlin, 1760), and an early attempt at adaptation of an actual Indian melody, called Alknomook or Alkmoonok (“The death song of the Cherokee Indians”), was first published in London in 1784. In America, James Hewitt included Alkmoonok in the score he arranged and composed for the ballad opera Tammany (1794). 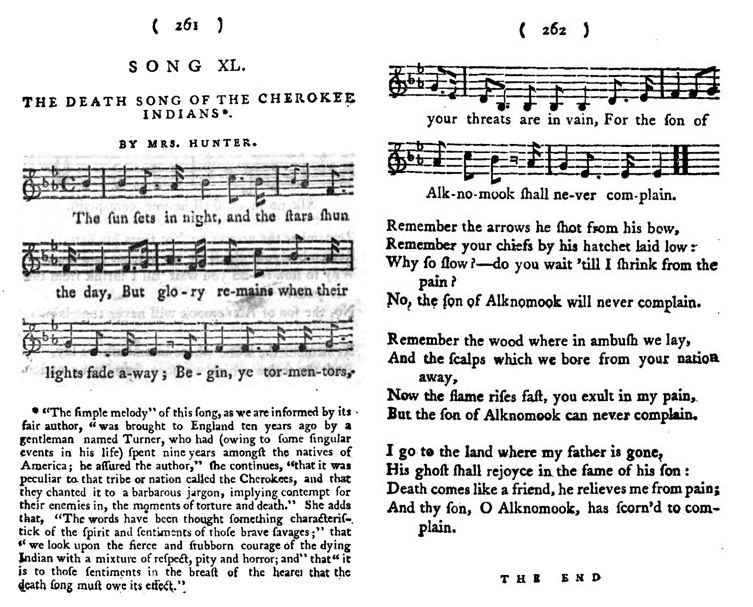 There are more to be found on the Native American Flute Song Book web page.

Not the answer you're looking for? Browse other questions tagged 18th-century 17th-century native-americans 16th-century music or ask your own question.