Which types of tank are on this photo?

One of the more iconic photos of the Prague Spring is this: 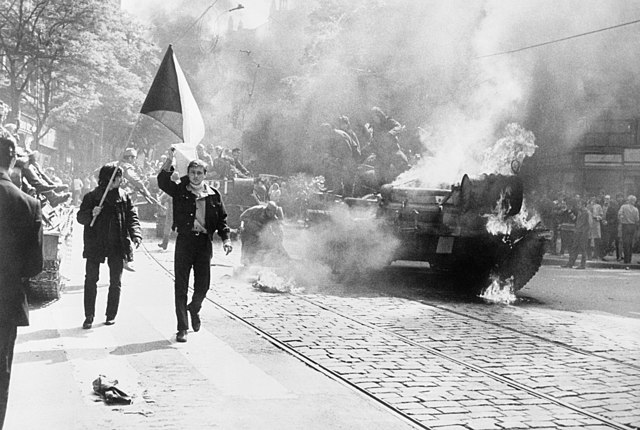 A high Res version is on wikimedia, who took it first from a CIA flicker post. It is labeled there as "1968. During the Soviet invasion of Czechoslovakia, Czechoslovaks carry their national flag past a burning Soviet tank in Prague."

After reformation attempts in Czechoslovakia spearheaded by the KPČ under Dubček to attempt a "socialismus s lidskou tváří" (Socialism with human face), the Warsaw Pact troops marched in on 21st of August 1968 after pressure by DDR, PRL, HPR and PRB on the USSR. The troops in action were coming from the Soviet Union, Poland, Hungary and Bulgaria, DDR troops stood in waiting at the border but never crossed.

Most of these armies were armed with several tank models designed in Russia, though sometimes modified.

I have trouble identifying the two armored vehicles - the one in the background left with the text on the side and the burning one on the right.

Which model of (supposedly Russian) tank is this?

The tank on fire is most likely a T54 Soviet tank, prepared for longer range with the horizontal beam attached to the back and one of the two barrels still in place.

It looks like the tank on fire could have had a second barrel on the left side next to the barrel that is on fire.

Here is a picture in Prague where the mounted beam on the back of the tank is better visible and can be compared with the one on the photo in the question. The number of wheels corresponds too, with a bit more space behind the first of the bigger 5 and 2 small ones front and back. Alsothe angle of the track going up on the hind side matches.

This picture of the same tank in the samelocation is almost identical totheone in the link above but with a man walking past the tank and a second turret of another tank that pulled up beside the first. You may research the unit from the markings.

Not the answer you're looking for? Browse other questions tagged identification tanks 1960s czechoslovakia photograph or ask your own question.