How did the news of the reality Nazi concentration camps reach the United State's mainstream? What were the waves of awareness and when? [duplicate]

I just watched a documentary (I think it was called "We Were There" or "I Was There") featuring interviews of US soldiers that were Jewish and had helped liberate Nazi concentration camps. I was struck with how many of them mentioned they had no clue the Nazis were burning, gassing, torturing, and starving Jews. They were in many cases approaching the gates of these facilities with the label "concentration camp" in mind and expecting a more standard military detention center or jail.

I guess I had wrongly assumed that soldiers and even the broader American public knew what was going on during the Holocaust and that it had been part of the US mainstream accepting the need to go to war. Certainly people were escaping these camps and telling their stories to international media. How can we characterize US citizens' awareness of the full horror of the Holocaust in 1940, 41, 42, 43, and on? When did people become broadly aware? And how were the horrors explained by escapees or loose-lipped guards disregarded or acknowledged but only in a small segment of the population?

On November 23rd, 1938, the Arizona Republic was one of several papers to carry this stark headline: 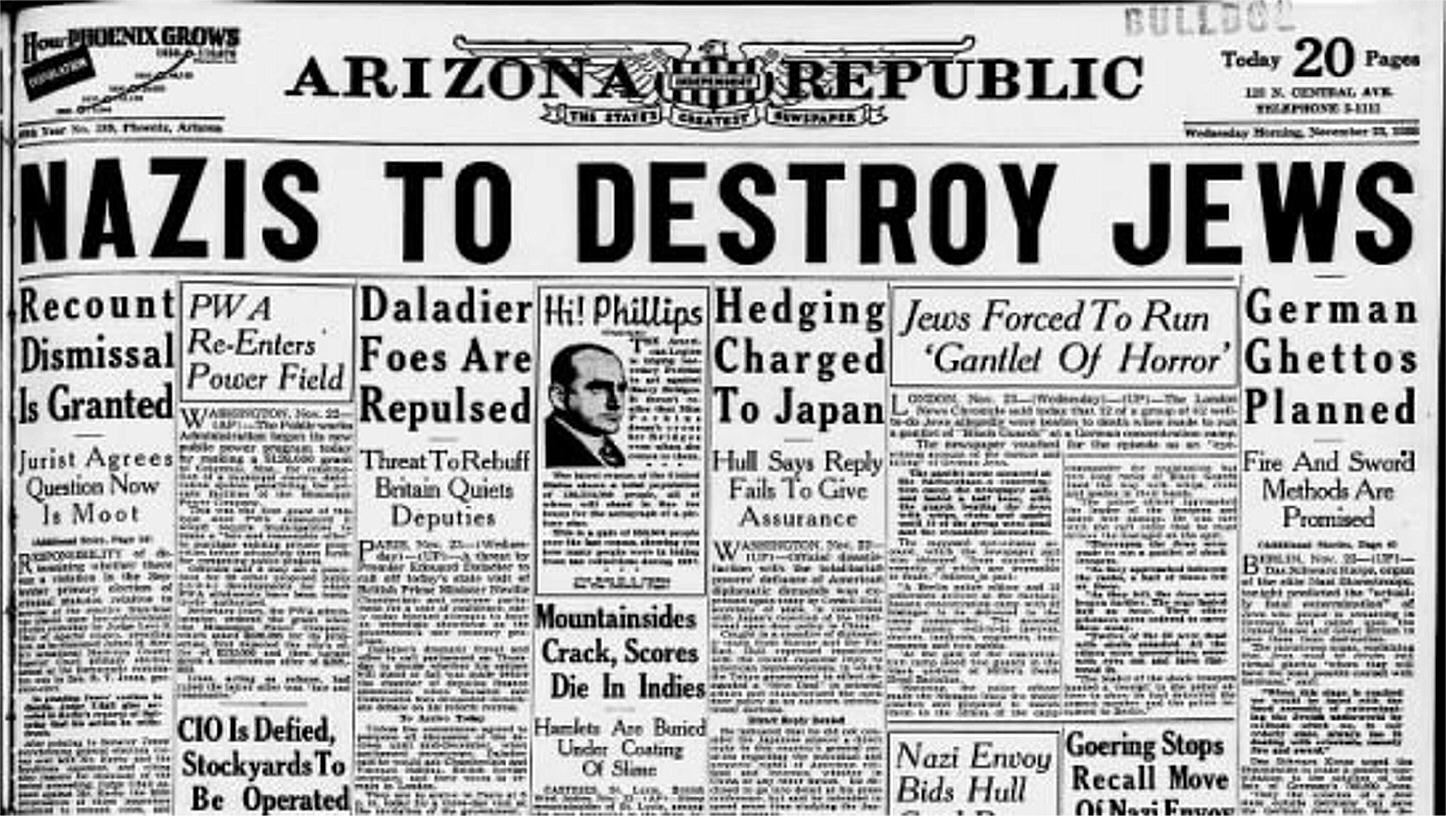 On November 6th, 1939, on page 7 of the New York Times, under a headline 'Jews said to face famine in Poland' it was reported that

About 1,500,000 Jews remaining in that area are condemned to starvation.

Just over a year later, on November 26th, 1940, the same newspaper had article (on page 8) on the Polish Ghetto under the heading

On August 24th, 1941, Winston Churchill made a radio broadcast which included

By this time, the first mass murder of Jews (June 27th) had already begun. How much coverage this speech was given in the US, though, is unclear.

It is now estimated that the Germans have massacred more than one million Jews in Europe since the war began. That's about 1/6 of the Jewish population in the Old World.

Around the same time, the Los Angeles Times wrote:

What is happening is this: millions of human beings, most of them Jews, are being gathered up with ruthless efficiency and murdered.... The phrase "concentration camp" is obsolete, as out of date as "economic sanctions" or "non-recognition." It is now possible to speak only of "extermination camps."

On December 17th, 1942, a joint declaration by the Allies published on the front page of many newspapers referred to (among other things) Poland being "made the principal Nazi slaughterhouse" and to "mass executions".

Even before these very public announcements, there had been numerous stories in the press about Nazi atrocities.

that while half of U.S. respondents in 1943 thought the fact that 2 million Jewish Europeans had been murdered was just a rumor, by 1944 about three-quarters believed concentration camps were really part of the Nazi plan — and yet they still couldn’t fathom the number of victims involved.

Unfortunately, many of these stories were 'buried' on the inside pages or otherwise given little prominence, as in the Honolulu Star-Bulletin On December 17, 1942 (see below). 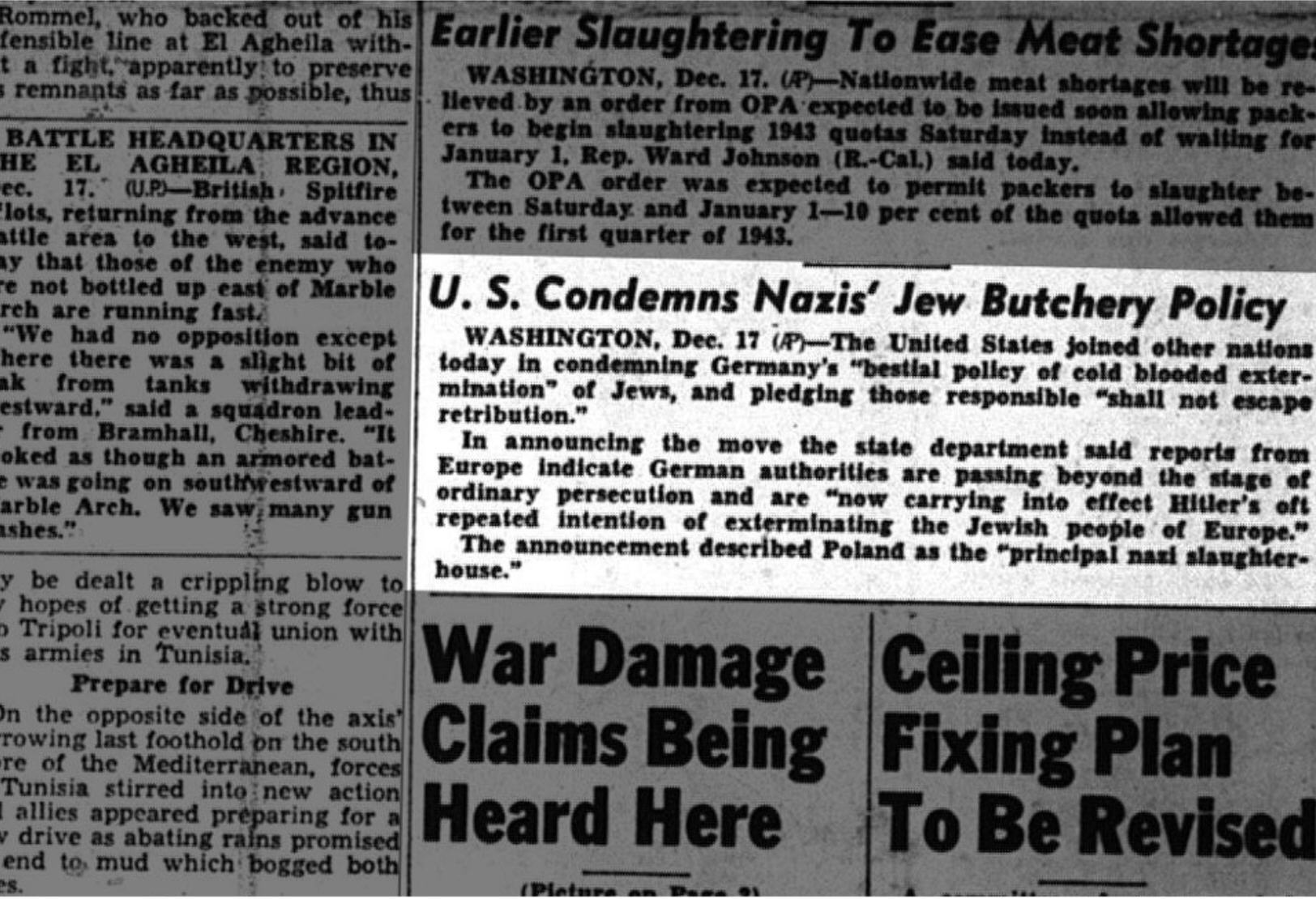 The headline Nazis plan to kill all Jews made it onto the front page of the Endicott Daily Bulletin (below) on November 25, 1942...but one has to look hard to find it. 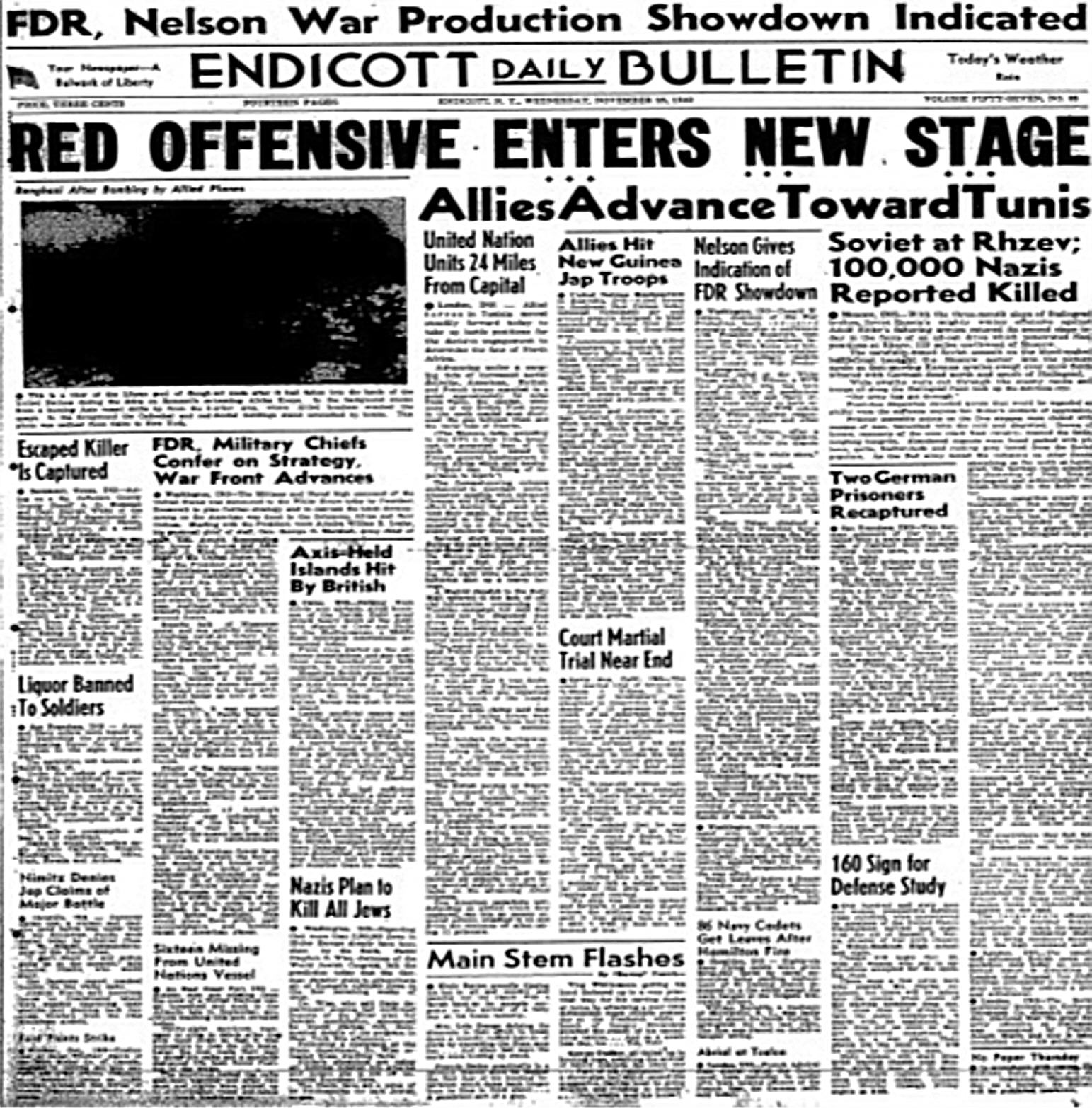 Source: History Unfolded: US Newspapers and the Holocaust

This limited understanding or acceptance of the then known extent (as reported) of the holocaust was revealed when respondents were asked (in November 1944) how many they thought had been killed in the concentration camps:

When photos of the concentration camps liberated by American and British troops in April and May 1945 began to appear, the percent of those polled who believed that millions had died rose to 84%. This was when photographs of

skeletal survivors and stacked corpses, and the wrenching accounts of mass murder became a staple of American publications and newsreels.

Even so, 16% still did not believe. Statistics and opinion polls are all well and good but, as Peter Novick in The Holocaust in American Life says,

How many Americans had knowledge of the Holocaust while it was going on is as much a semantic as a quantitative question. It calls for distinctions among varieties of awareness, consciousness, belief, attention.

Or, as this Time Magazine article puts it:

Looking at the news that publications like TIME ran in the 1930s and ’40s shows that, in fact, Americans had lots of access to news about what was happening to Europe’s Jewish population and others targeted by the Nazi regime. But it also highlights a central truth about this period — and human beings in general. Reading or hearing something is not the same as understanding what it truly means, curator Daniel Greene tells TIME, and there’s a wide “gap between information and understanding.”

Then there is the problem in war of what to believe. It can be hard for the average citizen to distinguish between truthful reporting and propaganda, and many older members of the newspaper profession had memories of being fooled by propaganda during WWI. Nor did people in the 1940s have the internet at their fingertips and instant cable news with often graphic images.

Even William Casey, head of the Secret Intelligence Branch in Europe for the OSS, said:

The most devastating experience of the war for most of us was the first visit to a concentration camp.... We knew in a general way that Jews were being persecuted, that they were being rounded up ... and that brutality and murder took place at these camps. But few if any comprehended the appalling magnitude of it. It wasn't sufficiently real to stand out from the general brutality and slaughter which is war.

Not the answer you're looking for? Browse other questions tagged united-states world-war-two nazi-germany holocaust media or ask your own question.